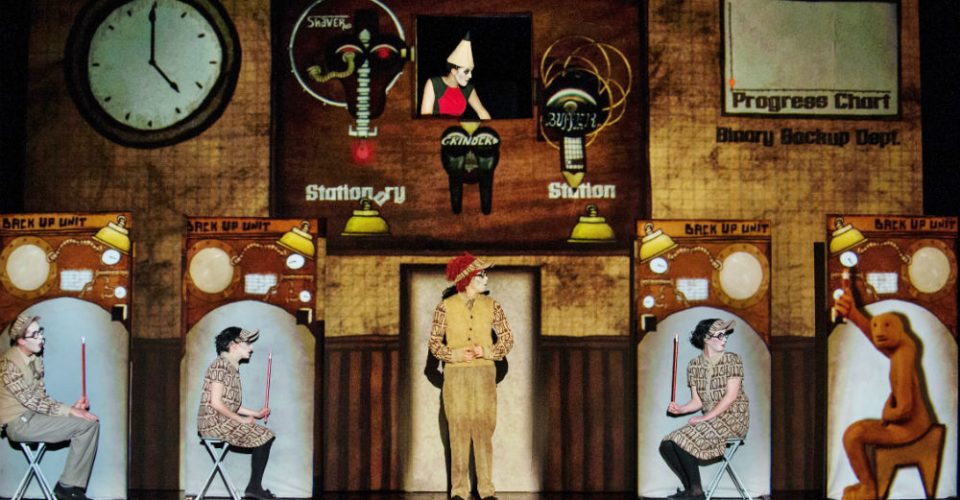 The darkly-humoured, delicious and Kafka-esque fable, Golem, described as “a giant graphic novel come to life” is soon to be playing in Adelaide, as part of this year’s Festival Of Arts. The show features a blend of handmade animation, claymation, live music and stylized performance and is set to wow audiences.

The Clothesline catches up with 1927’s co-founder, artist and illustrator Paul Barritt, and asks how he describes Golem to others.

“It is an entertaining show,” Paul begins. “It’s full of laughs, animation, live music… and the evils of neo-liberal capitalism.”

The Golem has appeared in folklore for centuries. What are the major cultural and artistic elements that have influenced your work on this show?

“While we were definitely influenced by the folk tales about Golem, really the main influences for the show come from looking about ourselves at the modern world, often with a sense of despair…”

Golem combines many forms; it has been described as a “thrilling combination of animation, live performance, theatre and music”. What, if any, were the biggest challenges in combining the various elements of the show?

“Every aspect of making work like this is challenging,” Paul says. “Obviously, it takes a very long time to make animation, and then it takes even longer to put the whole thing to music and fit the performance into the scenes.

“It is a complicated process but one everyone in the team seems to get a lot of satisfaction from, perhaps due to the difficulty and amount of dedication needed to pull it off!”

In what ways does Golem differ to your previous work with 1927?

It doesn’t really differ that greatly,” he says. “Combining animation with live performance is what we do at 1927. Thematically it is similar to our last theatre show, The Animals And Children Took To The Streets, in that is has a socio-political point to make…

Who comes up with the ideas for your animations? Is it solely yourself, or is there a collaborative approach within 1927?

“The whole thing is very collaborative,” Paul explains. “Suzanne (Andrade) and I work on the story, and then she writes a load of stuff. She and Esme (Appleton) work through the performance ideas while also working with Lilly (Henley) to score the scenes. In the case of Golem, the rest of the cast were very involved with this process.

“Meanwhile,” he continues, “I am making a load of animation in response to the scenes and ideas we’ve figured out. I take it along to rehearsal and we try to fit the whole lot together! It’s a long and constantly evolving process and a lot of work gets discarded along the way.”

What is the message you are hoping audiences will take away from the performance?

“To switch off every now and then and think about exactly who is controlling them.”

What is the most enjoyable/interesting aspect of being involved in a show like Golem?

“The relief when it’s opened, when audiences like it and we can all have a well-earned drink!” he laughs.

What professional and/or personal things is the company hoping to get out of your visit to the Adelaide Festival Of Arts?

“I am not actually personally going to be there, but it is great to be returning to the city,” Paul says. “We did our first show there many years ago. It was the first bit of Australia we saw. So it feels great to be heading back to Adelaide with another 1927 show.

“Hopefully the touring gang will get to go up to the animal park and stroke the koalas like we did last time!”

Do you have anything to say to your potential Adelaide audience?

“I hope Adelaide loves the show. My brother was over there visiting his father-in-law and saw the giant Golem adverts on the side of the tram, which I thought was great! Bring it on!