Graduate Singers and Karl Geiger present their Final Concert for 2016 “How Shall We Sing?” at Elder Hall – Interview 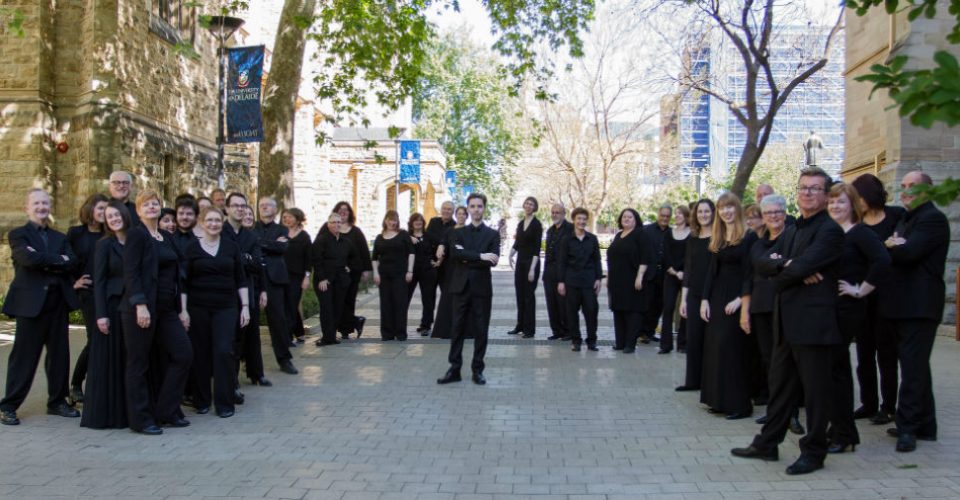 Formed nearly 40 years ago by members of the various university choral societies who wanted to keep singing together after graduating from university, Graduate Singers has since grown to include people from all walks of life – not just university graduates – and has become one of Adelaide’s most respected choral organisations.

Grads, as they are affectionately known, are presenting their final concert for 2016 with How Shall We Sing? with a cross section of choral music spanning several centuries. We speak with Director of Music, Karl Geiger, who has been working with the choir since 2012.

“The choir got its name from a comment made at one of the very first rehearsals,” he begins. “The singers were struggling with a fairly straight-forward passage of music, and the conductor made a comment along the lines of ‘what’s the matter with you, you should be able to sing this – you’re all graduates!’.”

Music has always been such a beautiful way of expressing ones feelings or dealing with emotions. The first notes of a song can take us back to a moment in time or even to an emotion felt. This seems to be an integral part of the choir’s core.

“Absolutely!” Karl agrees. “Singing in a choir is a unique and rewarding activity – there’s nothing quite like it, and it’s this ‘special something’ that motivates people to keep singing in choirs for years on end, sometimes for their whole lives. I try to program music for each concert that I think the choir will enjoy rehearsing and singing, but also find challenging – different pieces of music will mean different things to each singer, so I like to choose a diverse range of works so that there’s something for everybody.”

What is the meaning behind the concert title How Shall We Sing?

“It’s taken from one of the pieces in the program, How Shall We Sing In A Strange Land by Australian composer Jo Twist. Jo has set two different texts to music in this one piece – an extract Psalm 137 from the Old Testament and A Song Of Hope by Oodgeroo Noonuccal. This juxtaposition of old and new runs throughout the program, which contains music of a sacred or spiritual nature, and so using Jo’s piece to name the concert was the logical thing to do!”

You appear to be using a number of both local and international composers. Please tell us about them, the songs, and why they were chosen for this performance.

“All of the music in this concert is in some way sacred or spiritual in nature, and I always look to pick music that is both connected yet contrasting in some way,” he says. “The major work on the program is English composer Vaughan Williams’ Mass in G minor. This work is one of the ‘gems’ of English choral music, and is loved by both choirs and audiences alike! It has been a ‘bucket list’ piece of mine to conduct, so after this concert I can cross it off!

“Two works on the program are by local Adelaide conductor and composer Carl Crossin. Carl has been an important figure in Adelaide’s choral music scene for many years, and is himself a past conductor of Grads. I’ve wanted to include some of his music in a concert for some time, and it just so happened that two very beautiful pieces of his fit right in to the ‘theme’ of this concert – Mater Dolorosa and Night Prayer.

“Jo Twist’s piece is an energetic and exciting work that brings a bit of ‘pep’ into the program,” Karl adds. “I think it’s important that Australian composers are well represented in our concerts, and Jo’s works are always a thrill for the choir, and for the audience.”

Do the choir members have input into songs performed or show themes created? If so, what are the processes you go through as a group to create either traditional or contemporary versions of songs, including harmonies/descant etc.?

“I am largely responsible for the creation of our concerts and the music that goes in them, but I frequently take input from the choir as to what they like to sing. The nature of choral music is such that we don’t usually have much ‘creative’ input into the actual musical itself- it’s all written out for us. However we do spend time in rehearsals as a group experimenting with different interpretations of the music – seeing what works and what doesn’t – and sometimes it’s the singers who make me realise what’s best!”

2017 will see Grads celebrating their 40th birthday, with the program being launched at the performance. Congratulations. What will be in store for both the choir and audiences?

“I can’t give away too much at this stage,” Karl says, “but we’re certainly planning some exciting concerts for 2017! Our first concert will feature a well-known and much-loved work by a very familiar composer, our second concert will be a 40th anniversary ‘gala’ and feature works that have been of some significance to the choir over it’s lifetime, as well as a new commission by a local composer specifically for the anniversary, and December we’ll be presenting a concert of Christmas music with pipe organ and brass to add a little grandeur to the event – always a popular show!”

What have been some of the most memorable performances in your time as Director of Music?

“There have been a few ‘extraordinary’ performances that the choir has been part of over the years that have been important,” he says. “One is the collaboration with several other local choirs and the Adelaide Symphony Orchestra to present Mahler’s 8th Symphony in 2010 – a huge work requiring many performers, and so is not performed very often!

“There have been many small, special moments for me in my time as conductor, but two particular events that have been highlights for me was we sang as the choir for the Doctor Who Symphonic Spectacular in 2015 (yes I am a Doctor Who geek!), and more recently when we participated in a choral masterclass with one of the world’s leading choral conductors, Stephen Layton.”

For people who have never seen a choral performance, what would you like to say to them to maybe entice them along?

“There’s no substitute for attending a live concert – there’s a ‘buzz’ and an energy that you just don’t get from listening to a CD or watching a concert on TV!” Karl enthuses. “Singing is a universal language – everyone can do it – and whether we realise it or not it plays an important part in all of our lives. Even if you’ve never heard of any of the music or composers in a choir concert, I guarantee that there will be something in the program that you’ll enjoy and connect with. And you can also enjoy a glass of wine at interval!”

Do you have any advice for people who may like to be involved in choir, either with Grads or other local groups?

“If you love to sing then there’s undoubtedly a choir for you in Adelaide – we’re fortunate in that we have a thriving choral scene, with many groups that span all levels of experience,” he says. “There’s a fabulous organisation called the Australian National Choral Society that can help people find a local choir. Grads is always open to expressions of interest from singers – especially men! – so if you’ve had some experience singing then by all means get in touch with us!”

“Only that I wholeheartedly encourage anyone and everyone to come along to a Grads concert and see what we do!” Karl concludes. “You never know if you’ll like something until you try it!”

Graduate Singers presents How Shall We Sing? At Elder Hall, North Terrace, Adelaide, from 7.30pm on Sat 12 Nov.

Book at <graduatesingers.com.au>. Click HERE to purchase your tickets.