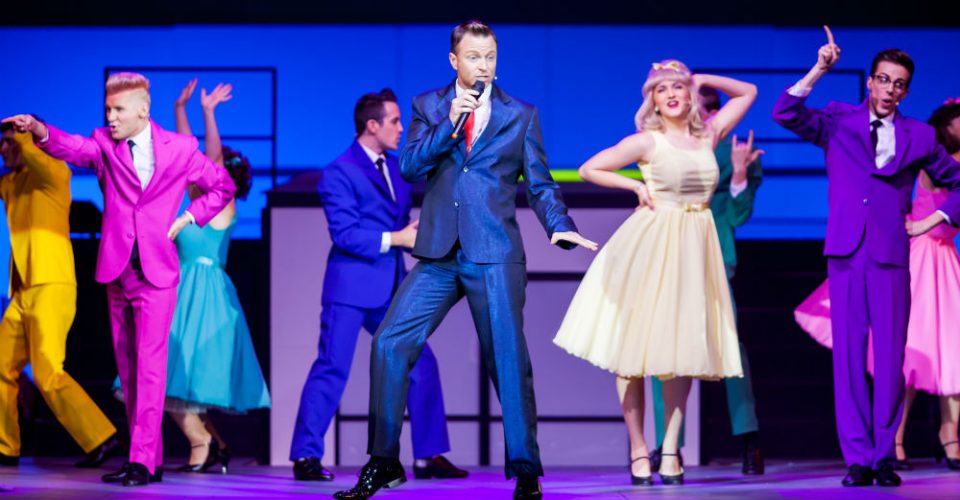 It’s the 1960s when TV dance shows were all the rage and segregation was rife. But change is in the air when Tracy Turnblad, a dance-loving Baltimore teen, successfully auditions for a place on The Corny Collins Show. Dreams come true and she becomes an instant celebrity and paves the way for a new style of fashion, dance and fun. Using her new-found fame, young Tracy sets about toppling the Corny’s reigning teen dance queen while opening the gates to racial integration and acceptance on the show – and in her hometown.

Starring Tim Campbell, Christine Anu, Simon Burke, Wayne Scott Kermond and newcomer Lauren McKenna, Hairspray – The Big Fat Musical Spectacular is set to bring down the walls of the Adelaide Entertainment Centre. We speak with the ever delightful Tim Campbell who, some might suggest – him included, lives and breathes the role of Corny Collins.

Hairspray is a big enough show as it is, but to add 600 kids to it must be amazing and overwhelming at the same time.

“Absolutely,” he begins. “And when we do this show in each city, there are 600 new kids doing it for the first time. Not only is this brilliant onstage – and the production numbers are huge – but it’s the largest scale in the world of a Hairspray performance. I’ve really got to be on my game because half these kids know the dance steps better than me [laughs]. They make the big numbers huge! It’s fantastic!”

Launched in Brisbane, what is obviously an amazing experience for all involved, but is such a large cast also a distraction? Will audience members know where to look?

“To be honest, we’ve had nothing but incredible responses,” Tim says. “Hairspray is such a kitsch really poppy kind of show. But the fact that they have that much to see is really exciting. I’ve seen a couple of musicals where I can’t wait for the interval, let alone the end [laughs], yet there is so much to witness, from great choreography to costumes that include blow-up suits… it’s huge. The creators have put so much in to every aspect of the show.

“I’m not going to lie, I’m a performer and I’ve got an ego so some actually need to look at me as well,” he laughs, “which probably explains why my second-half costume contains a massive amount of sequins. Obviously, I’ve been typecast as Corny Collins but, my god, I reckon a few wardrobe people and some of the cast have got dibs on that jacket when we finish!”

They won’t let you keep it as a souvenir?

“I’ve already told them that it’s tradition that I either keep it… or I could just steal it before any of them realise [laughs].”

Corny Collins is such a ridiculous name, but back then things had different meanings. To be gay was to be happy, and corny no longer describes a cool guy that hosts his own TV dance show but is a total dag.

“Again, I’ve been typecast, Tim laughs. “Not only do I not really have to act in this show but I don’t even have to explain my character because I’m basically him!”

So, you were made for this role! Is it one that you have ever dreamed of performing?

“It totally is. To be honest, I’ve always wanted to play Corny Collins. It was so easy to say yes when they asked, because it’s just me being me. I’d never tell them on the invoice but I don’t have to act at all [big laughs].”

John Travolta really made the role of Tracy’s mother all his own. Big shoes to fill. How well does Simon Burke fit those heels?

“Simon, along with Wayne Scott Kermond as the father, are just so good,” Tim says. “When the two of them do that beautiful little number together, it’s prefect and very cool. Wayne is short and Simon has his big fat suit on. Simon is fantastic!”

Tell us about Christine Anu as Motormouth.

“She is phenomenal,” Tim enthuses. “I had forgotten just how good a singer she is. I Know Where I’ve Been, her big song in the second act, she’s bringing some Queen [Latifah] essence to that moment, I can tell you! Having all the kids march along with her brings a pretty poignant moment in the show. And then after that, I’ve got to come out and do some cheesy, sequin jacket, hairspray song [laughs].”

There are so many musicals that have such brilliant songs. Hairspray is no exception with songs such as Good Morning Baltimore, I Can Hear The Bells, The Nicest Kids In Town, (You’re) Timeless To Me, Hairspray and I Know Where I’ve Been. Do you have a favourite part of the show?

“It would have to Christine singing I Know Where I’ve Been. At that point I’m waiting in the wings to go on so I get to sing along as well,” he says. “One of the other great things about this show is the music, so I haven’t got sick of it yet. I was saying earlier today that I don’t do long runs of musicals because I get bored, but that’s not the case with Hairspray, because I really love the music.

‘Christine’s song is a big big number and there are also some great Vaudevillian moments with Wayne and Simon; they do this little dance/waltz together with a little slapstick thrown in, which is fun. The Madison is good too, because all of the kids are on stage. It’s a huge moment. Because it’s part of the ‘TV show’, I just get to wander around, smile and take it all in. Like I said, I don’t act in this show, I just go and enjoy it and say some words in between [laughs].

“Without trying to sound cliché, there are a lot of great moments in Hairspray. It’s quite the spectacle like nothing I’ve been a part of before.”

“I didn’t realise but there is a tradition in Hairsprays around the world that the role of Tracy is played by an unknown,” Tim says. “Not a total unknown because their parents love them [laughs] but someone who is given a chance to be a star – just like the character that is given her chance to be on the TV show. Lauren is fantastic. She suits the role perfectly – a great actor and singer. She befriends a lot of the kids in the show and has grabbed the character by the horns. People are going to love her.”

“The good thing about this show is the sheer scale of it, but there are only three shows in two days, so I’m hoping people will jump on board before it’s too late and we’ve gone again,” Tim concludes. “It’s in the Adelaide Entertainment Centre for a reason – because it’s massive – so I hope people jump on board, put their seatbelts on and enjoy because you’re not going to see a production like this many other times.”

Book at Ticketek at ticketek.com.au and 132 849. Click HERE to purchase your tickets.