Happy-Go-Wrong by Andi Snelling: When Life Takes A Turn For Better Or For Worse ~ Adelaide Fringe 2021 Interview 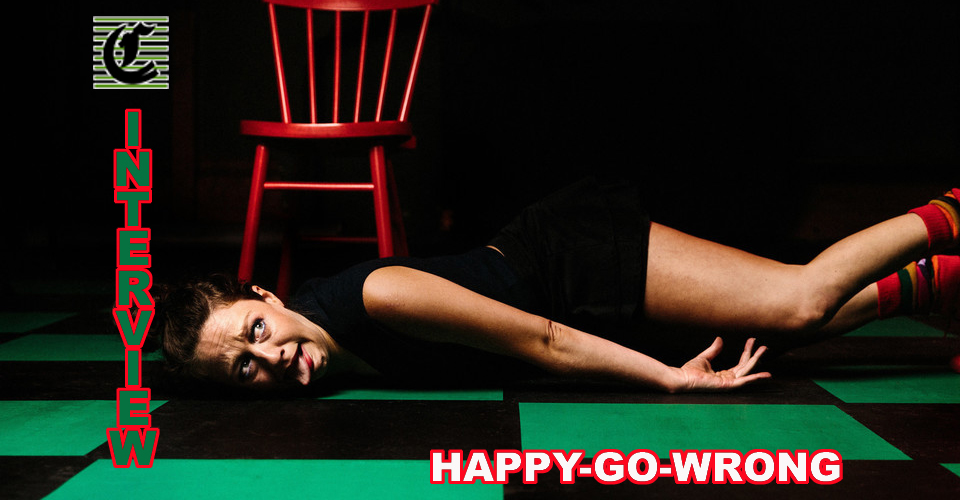 Growing up as a gymnast and dancer, with skills in clowning and puppetry, it was perhaps not surprising that Andi Snelling was drawn to physical theatre. With an acting career including a role in Neighbours, Andi also writes and performs her own solo theatre shows, with #DearDiary (2015) and Déjà Vu (And Other Forms of Knowing) (2016) enjoying critical success and multiple sell-out seasons. Her latest work Happy-Go-Wrong (2019) garnered standing ovations, rave reviews, won awards at Melbourne Fringe 2019, NZ Fringe 2020, received two Green Room Award nominations for Best Performer and Best Writing (Independent Theatre, 2019), and made several ‘Best Of’ 2019 lists.

Adelaide Fringe 2021 finally provides Andi with the chance to bring the show here, so we speak with Andi Snelling – who is no stranger to Adelaide – about Happy-Go-Wrong.

“This is not my first Radelaide Rodeo!” she says. “I’ve been here many times and always have a blast. It’s my favourite festival. I have great memories of performing my first solo show, #DearDiary here in 2016 and completely selling out that season. But this year feels extra special as Happy-Go-Wrong marks my return to the stage after a long hiatus due to severe illness. Let’s just say, this is my third attempt to return to Adelaide with a show! I talk about the significance of ‘third time lucky’ in my show actually, so it’s rather meta that this is my own third time lucky!”

You first performed Happy-Go-Wrong at the Melbourne Fringe 2019, receiving many accolades, including the SA Tour Ready Award. So you finally get to bring this show to Adelaide?

“Yes, the show has had a phenomenal response so far. Never have I received so many DMs and e-mails after every performance from complete strangers sharing how much the show affected them. You don’t realise as a solo artist the impact of your work until you have your audience as your mirror.

“I’m so excited to finally get to share the show with Adelaide,” Andi says. “This year feels like my year. It’s the right time for me and especially, for the show’s message of how unexpectedly magical uncertainty can be. When I wrote the show back in 2019, I certainly hadn’t foreseen how much the entire world would go through its own version of Happy-Go-Wrong!”

Your show is a response to your experience with a little understood (in Australia) disease called Lyme disease. Do we need to do any research before coming along, or is the show more generally about living with a disabling illness?

“Yes, I see you’ve done your homework and I really appreciate that! The show itself is not about Lyme disease and there is no research required at all to understand or enjoy my work, but yes, it is 100% borne out of my experience with Lyme disease and the powerful lessons facing my mortality has taught me.

“Lyme is a funny beast – it’s at once a devastating, sometimes fatal disease, yet also downplayed and often, ignored completely by the medical establishment in Australia. (It has certainly been a unique experience watching our government turn itself inside out in the name of the COVID pandemic, whilst simultaneously having the private experience of medical abuse and neglect.) But, at the same time, as my show is testament to, my illness remains the most self-empowering experience of my life by necessity.

“I’ve been told many times over that my speciality as a theatre-maker is making the personal universal and this is absolutely my aim with this show. From the outset, it was important to me to create a work that could beat the heart of anyone. I worked consciously to keep any ego victimhood about my illness I may have had well out of the show so that it could grow beyond my private experience as much as possible. Certainly, the response from the chronic illness and disability communities has overwhelmingly been that it resonates strongly, but given all humans face invisible struggles, I’ve found across the board, all audiences have related to the themes of the show.

“My belief is that theatre has the power to transport us to places where life cannot go; it shows us who and how we are by using the abstract to make sense of what can feel illogical and unfathomable.”

Should we be fearful that your show will be a bit grim, or is the life-affirming aspect of the play what we will take away?

“The show is ultimately a comedy that takes an intense twist so I wouldn’t call it grim at all! It’s funny how people often equate illness and death as grim because my experience of the two has been the opposite. Facing my mortality has been life-affirming and this is the point of the show: that it is death that teaches us how to live.

“Happy-Go-Wrong is ultimately a celebration of being alive,” Andi says. “Certainly, I don’t shy away from the dark, but I do so in wonderfully playful and grotesque ways. I care a lot about my audience so I promise you’re in good hands. Just come along and find out!”

Your style could be described as physical theatre, with a fair bit of clowning, dancing and storytelling. It sounds like there’s a lot going on.

“Ha! Yes there is [laughs]. I love to blend genres and create my own performance style. I come from a dance upbringing, followed by classical drama school acting training and then years of physical theatre and clowning so there’s all that going on and more. I also love designing my own shows and I’ve particularly enjoyed creating some magical visual metaphors with A LOT of brown butcher’s paper in this show. It’s definitely one of the benefits of creating your own work; you get to throw together everything you love doing into the one piece and share that love. I often feel like a kid in a playground that I tailor-built for myself when I perform this show.”

Like many others, your opportunities to perform were seriously curtailed in 2020 by the Coronavirus. What impact did this have on you?

“While I did have some performance work cancelled due to COVID, to be honest, I had planned a long period of focusing on my health and in fact, had a big treatment overseas booked in that had to get cancelled when the pandemic hit. So the biggest impact COVID had on me in 2020 was that it cut me off from many of my regular treatments and appointments that are important to the ongoing management of my health. In the end, I was so severely unwell for about four months through the middle 2020 that I wouldn’t have been physically able to perform anyway.

“This is a great example of how people with chronic illness were already used to factoring in abrupt change, cancelling of plans, isolation and health management through extreme measures long before the pandemic.

“I must say I feel lucky to have even made it here to Adelaide, given we Victorians were in hard lockdown with borders closed to us a mere week or so ago. I have friends from Melbourne who had to cancel their Fringe shows because of the recent travel restrictions. Touring a show feels very different now.”

Before COVID shut everything down you got to perform in New Zealand in early 2020. Your journey with Lyme disease started from a tick bite you received while travelling in New Zealand in 2014. Did you experience any trepidation taking the show back to New Zealand?

“Returning to New Zealand for the first time since the tick bite that changed my life felt very significant indeed, but I had no trepidation at all. If anything, it represented a sort of reckoning for me. It felt great to stand on kiwi soil and share my story right where it all began.”

You are still living with the effects of your illness? How does this impact your enthusiasm and ability to keep working on your very physical theatre shows?

“Yes, I am still living with the effects of my illness, and it’s a constant test of my will,” Andi says. “Most days I wake up and say, ‘What is possible today?’ I always find possibility, no matter what. This is what has saved me from the brink. I’d say because I’ve been through so many years of a malfunctioning body, of so many stops and starts, and the huge grief that comes with saying goodbye to a certain way of life and adapting to the new, I know that anything can happen at any moment, good or bad (it’s all ultimately good, really), so I try to make the most of everything and that’s what keeps me enthusiastic for life.

“Certainly, there were periods where I thought it might take me down, but my relationship with my illness is completely different these days: now we are friends. We still fight occasionally, but we always kiss and make up.

“I do laugh at myself though, that I’m such a physical performer who likes to pack in so much to a show, while trying to rest my body and navigate some pretty hard-core symptoms that often feel as if they prevent me from being as physical as I’d like. It’s wonderfully absurd and forever teaching me how to do more using less. I’m forever pushing my own boundaries and trying to look after myself as much as possible.”

You write your own shows. Is this a totally solitary occupation or are there other people involved in the process?

“I predominately work alone – it is hours of me just bouncing around in a studio space, filming my countless improvisations, and eventually threading it all together, however, once I’ve reached a certain point, I do bring in other people to give feedback. I think this is crucial as a solo theatre-maker.

“In the earlier stages of the show’s development, I worked with director Danielle Cresp. Because this is our third collaboration,” Andi says, “she knows me inside out and we have this shared language, so things can shift quickly when we’re in a room together. Once the show found its feet, I went off on my own again and re-worked parts, particularly the narrative structure. That’s when I brought in dramaturg Fiona Scott-Norman who is just so wonderfully no bullshit and a great motivator for making brutal cuts to the writing.

“For this Adelaide season, I have worked mostly alone, partly due to living more regional and partly due to COVID restrictions. It was hard for a while there to even find a space to rehearse in with all venues closed, so this was a very different rehearsal period for me, but I’m feeling good about where the show’s at now. It has grown so much over the years and having a whole year away from it then coming back to it has been very re-invigorating.”

Is there anything else you would like to tell us to encourage us to come along to see Happy-Go-Wrong?

“I guarantee you won’t have seen anything like this show before!” Andi says. “Come say hi in the foyer afterwards. I love meeting my audience!”

Happy-Go-Wrong performs at Mainstage at Bakehouse Theatre from 8pm on Wed 10 Mar until Sat 20 Mar.