First published in 1966 and mostly drawn from a series of interviews conducted in 1962 (with help from a hard-working interpreter), this often-reprinted-and-revised tome is one of the key works of cinematic literature and much loved by film freaks everywhere. This new, bigger edition coincides with the 2015 documentary Hitchcock/Truffaut (although the book is sometimes known as Hitchcock By Truffaut or even just Hitchcock), and has added chapters where the subject discusses his post-’62 pics and beyond, and while Sir Alfred (1899 – 1980) wasn’t giving too much away about his personal life, we’re nevertheless given as close to a portrait of this legendary filmmaker as humanly possible, a not-quite-guarded look at the real man behind the famed droll persona and trademark chubby profile.

And Hitchcock discusses every one of his 53 films, from the untouchable classics and masterworks (Shadow Of A Doubt, which he acknowledges as just about his own favourite of all his films, as well as Rear Window, Vertigo and Psycho), his audience pleasers (The Lady Vanishes, his take on The 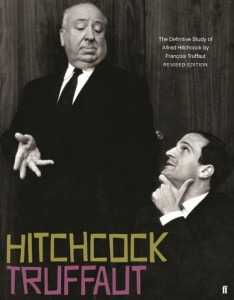 39 Steps, Strangers On A Train, To Catch A Thief, North By Northwest, the much-psychoanalysed The Birds), his rarely-screened-these-days silent efforts and earliest works (The Pleasure Garden, The Lodger, Blackmail), his wartime flag-wavers (Foreign Correspondent, Saboteur, Lifeboat), his more idiosyncratic outings (the experimental Rope, the black comedy The Trouble With Harry), his forgotten efforts (Mr. And Mrs. Smith, Under Capricorn, Stage Fright) and his later, more troubled pics into the later ‘60s and ‘70s, as he became more of a TV name but still managed the failed (and dated) Torn Curtain, the surprisingly distasteful Frenzy and his genial, slightly throwaway swansong Family Plot. And, indeed, his least favourite of all his movies, which some might have thought would be 1969’s Topaz but which he considers 1934’s faded costume drama Waltzes From Vienna (also known now as Strauss’ Great Waltz), made when he was more of a director-for-hire and before he became the beloved ‘Hitch’ a.k.a. ‘The Master Of Suspense’.

Full of his notoriously if joyously earthy humour (a jokey friendship with an early English movie star that provoked lots of actress/bishop gags, how censorship wouldn’t allow Cary Grant to be a murderer in Suspicion or get a bit ruder with Ingrid Bergman in Notorious, a possible documentary he might have filmed that would have followed food production from farms and factories to sewers) and revealing Truffaut (1932 – 1984) to be a huge movie nerd but a sweet and funny chap in his own right, this helped both their careers, with Hitch benefitting from the Cahiers Du Cinema cred and ‘auteur’ claims brought by François and this French ‘Nouvelle Vague’ leading-light enjoying popularity outside Europe and using it to get films like Day For Night and The Last Metro off the ground. And don’t forget to check out Kent Jones’ doco too, and watch as David Fincher, Wes Anderson, Olivier Assayas, Richard Linklater, Martin Scorsese (naturally), Peter Bogdanovich (but of course) and others whip themselves into fanboy raptures in a way that would have rather embarrassed Hitch, who was once told that younger filmmakers were imitating him in their own movies with homages, and supposedly responded, “I thought that was a kind of cheese.”