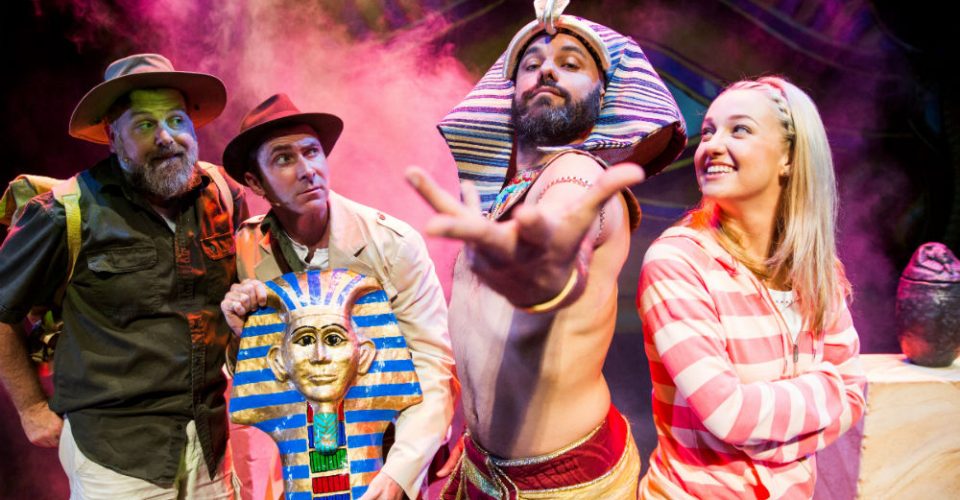 From books to television and then the stage, Horrible Histories has proven itself to be adaptable to many artistic styles. Although many will find the comical ABC3 television series of the same name the most recognisable, Horrible Histories originated as a series of immensely popular books written by British best selling children’s author Terry Deary and illustrated by Martin Brown. But it’s the highly successful stage production Horrible Histories LIVE ON STAGE! – Awful Egyptians that is causing this most recent ripple of excitement.

Actor, Helpmann and Green Room Award nominee Adam Murphy is sitting in the sun outside the Adelaide Art Gallery as we speak on the phone. We mutually agree that watching the Horrible Histories television series is not only enjoyable for kids, but also for adults.

It’s funny and a bit gross, and by the end of it you have learned a thing or three.

“That’s the whole stage show in a nutshell, really,” he begins. “My six-year-old daughter recently came to the show and I thought she might be a bit grossed out by a few things, but she was okay with it all – even the parts that I thought may be a little difficult for her to understand, like preparing a body to become a mummy; it’s essentially a latex body where all of the organs are ripped out through the nose and stomach, but it’s so comical that she wanted to see more of it.”

No matter what age your child is, there’s nothing funnier than a snot joke.

“Yes,” Adam agrees. “There are plenty of booger jokes and all that sort of stuff. The great thing about the stage show in comparison to the TV show – which is all short sketches that jumps from one era or country to another – Awful Egyptians has just the one storyline throughout, with the four of us playing multiple roles, which is a lot of fun.”

The other cast members that Adam refers to include Michael Lindner, who recently performed alongside Adam in Mary Poppins and Adele Parkinson [Legally Blonde].

“Justin Cotta mainly plays the Pharaoh,” Adam says, “while the rest of us play a variety of characters and spend much of our time taking the mickey out him – which is a lot of fun.”

So, what kinds of antics happen on stage?

“Well, we tell stories about the Pharaohs, and discuss whether the Pyramids were built by aliens or not,” he replies, “but we also talk about the mummies and why we prepare the bodies for the afterlife. We even do a mummy rap – hence the pun [chuckles].

“There’s also a real technical aspect to the production with huge screens behind us that acts as a backdrop showing different images to enhance whatever it is we are talking about,” Adam adds. “However, after the interval the screens not only become 3D but they are also in BOGGLEVISION where the objects appear to be flying out from the screen toward you.

“BOGGLEVISION is sort of 3D extended because the images go beyond the back wall as well as into the audience,” he explains. “It’s amazing for us on stage to look out and see everyone trying to grab the objects that just aren’t there. That’s how realistic it is!”

One of the things I love about Horrible Histories is that it’s educational and funny and can be enjoyed by kids and adults alike.

“Both the TV and stage versions are really open to all ages; no matter how old you are you’re going to get a laugh out of it, all the while you’re learning a thing or two,” Adam enthuses. “I see parents and grandparents in the audience enjoying this show as much as the kids are. Even without the audience participation parts that the kids enjoy so much, the theatrical experience is a great introduction for young theatre goers.”

How long does Awful Egyptians go for?

“Each act is around forty minutes long,” he replies, “but it’s so fast-paced that the time shoots by before you know it. We’re so manic on stage – doing silly voices and characters, changing hats and costumes, doing a few songs – it’s all very interesting to look at that you really don’t notice the time fly by.”

You have such an impressive acting bio, from Mamma Mia and The Pirates of Penzance to Neighbours and House Husbands. How does it feel to be doing children’s theatre?

“I’ve done both Wind In The Willows and Alice In Wonderland over in NZ, but one of my first jobs over there was a TV show very similar to Horrible Histories. So, when this came up, I jumped at the opportunity. My three kids and I love the Monty Python-styled humour and the cleverness of entwining the historical element and the lessons to be learned. But you don’t notice the learning part because it’s all so much fun.”

Do you know more about the Egyptians than you did before?

“I do. I’d never heard of Rameses the Great and I had no idea of how mummies came about,” Adam replies. The story tells of two brothers, a girl called Isis and a bit of jealousy. Just quietly, I think they were all related to each other – the girl as well. One brother killed the other and, so his spirit wouldn’t go to the afterlife, he separated all his body parts and scattered them all over the land. Then Isis went looking for them so she could wrap them all together so that his spirit – his Ka – could travel to the afterlife. I found that story really interesting.

“Adele, as Isis, comes out and sings a really funny song called I’ve Got Nobody as she collects all the body parts. It’s within the silliness that we get to learn these lessons,” he suggests. “It’s hidden – a bit like putting bran in Coco Pops [laughs].

“This stage production of Horrible Histories – Awful Egyptians is packed with comedy, facts, educational aspects, 3D and BOGGLEVISION,” Adam concludes. “All of these things make for a great time in the theatre, so come along and join in the fun!”

Catherine began her Arts Journalism career in 2001. Although originally studying Acupuncture, writing seemed to fall into her lap and stayed there. After 13 years of writing with Rip It Up, she is the Founder and Editor of The Clothesline and continues to nurture her love of writing and interviewing. Catherine is also the Arts Editor of BSide Magazine - Adelaide's newest free street press. In her other life, Catherine is a mother, award-winning singer-songwriter and carer, an advocate, occasional fundraiser and absolute supporter of Down Syndrome SA and Foundation 21. ..."It's a life... it may as well be mine!" : )
Copyright 2018 The Clothesline {site Massive Empire}
Back to top