iOTA – Slap And Tickle: A Variety Show Like No Other ~ Adelaide Cabaret Festival 2019 Interview 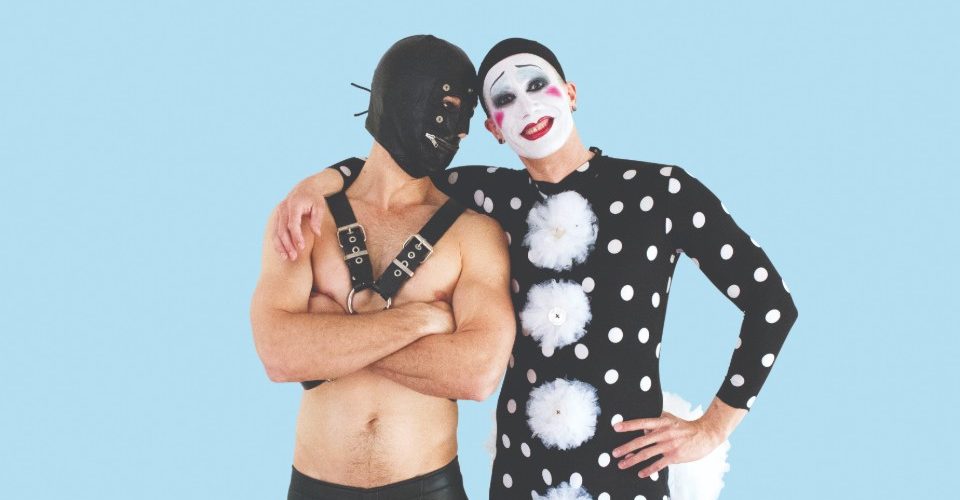 Starting out his musical career as a successful rock musician, it was a series of events that lead iOTA to find his heart of hearts in cabaret. Not since Craig Illot’s superb production of Smoke And Mirrors has iOTA had the chance to shine at Adelaide Cabaret Festival. Now he brings his latest production Slap And Tickle to town for two nights only. Joined onstage by friend and choreographer Russell Leonard, iOTA is at the Ministry Of Dance Studio in Melbourne as we speak with him over the phone.

Slap the Clown and Tickle the Gimp; it sounds like a fun night… just to slap a clown and tickle a gimp [laughs].

“Yeah, it is,” he laughs. “Slap And Tickle a one man show, but it’s a variety show – with two characters, Slap the clown and Tickle the gimp. Slap is the boss and Tickle is the shit kicker and the stage manager who makes everything happen. Slap is kind of the star who plays all the different guests in the variety show. So, it’s one man in that way, but it’s actually a two man show with a 12-piece jazz orchestra.”

So, it’s one man and his slave who the clown thinks is very unimportant?

“Yeah, although the show can’t go on without him really,” iOTA says. But, Tickle the Gimp has aspirations for better things, and through the show they have a little journey of their own ‘back stage’ – which is actually on stage so you see the dressing room and all the changes from one character to the next. It’s fun, it’s funny and ultimately it’s heartfelt and just entertaining. It’s fucking great!”

Having seen iOTA perform throughout the years from his rock music days to his final gig at The Gov where it was just him on stage which was fucking awesome. It was a tough call to go from a three-piece to an unintended solo performed overnight, but audiences have continued to see this versatile performer grow and re-shape in so many different ways since then. Yet, the one thing that has remained the same is that completely recognisable uniqueness of his voice.

This format of cabaret and theatre must really be home for you now?

“Absolutely, I think it is where I belong now,” he says. “I think a lot of what I’m doing now is what I’ve always wanted to do, but just didn’t know how to get there. I’ve had plenty of ideas of an explosion on stage, or even just a nice set, but who’s got the money to do that, and how do we travel that; those kinds of things just doesn’t work in the band situation. But there are theatre companies that will help make your dreams come true. I was thinking that today actually; everything that I ever dreamt that I would do, I’ve done and am continuing to do.”

From Hedwig, Rocky Horror as Frank N Furter, Smoke And Mirrors and now this show; how lucky are you and your soul – and US?!

“Sometimes I wished I lived in the bush and fished every day and was off the grid and didn’t have to worry about the world. Then other times I’m in a show like Lazarus, that I’m doing now, and think everything amazing and I’m really, really lucky – this is as easy as it gets, because I’m a human being with a job! I keep reminding myself, this isn’t a bad way to make money to pay the bills. This isn’t a bad way to be living and surviving, there are plenty worse ways.”

Where did you come up with the concept of Slap? He looks a little Pierrot-esque, but not quite.

“I think he would be a lot more of a basic clown, like a garden variety clown with a big red nose and silly boots if it wasn’t for my director Melissa Cantwell. She pulled things back a little bit, which was the completely right move. It’s so good to have a director that is completely honest with you.

“The idea came because I did a show at Perth Fringe Festival and they liked it so much they asked us if we would like to come back and do another. So, I just sat down and started writing,” iOTA explains. “I pretended I was in the theatre and when the lights came up and the curtain went up and something happened… Slap was the first thing I saw in my head and just started writing down songs and thoughts; everything came in pretty quickly. From there, Melissa Campwell and I began pulling it apart and putting it back together again, making it work and feel good, and giving give it some heart!

“We’ve had some really great reactions from people who like the show and journey it takes. It’s not just a variety show; there’s a story in there, and there’s a little bit of pulling on the heart strings at the end there, so bring some tissues!

iOTA has written all of the songs for Slap And Tickle, but we ask him to tell us about some of the ‘Variety Show guests’ that will make onstage appearances.

“There are quite a few characters that come and go. Sirena – the Mistress Of The Sea is like an oceanic zombie who was betrayed by her husband and thrown overboard, but she comes back to get her revenge. Wayno Braino is a Bogan but also a mind-reader extraordinaire! Eva The Diva is sort of an older Diva who is hoping one day to be in a musical; her song When I Sing in a Musical is a ‘soul’ ballad. There’s also The Sad Frog, The Wolf Man, Sammy The Snake and more!”

And you perform all of them?

“Yeah, and you see the costume changes happen in front of you,” iOTA says. “It all runs very smoothly and beautifully and quickly.”

And Tickle gets to hang out and be a gimp all night? He looks great in that Gimp outfit, don’t you think?

How involved in the show is the 12-piece orchestra??

“They are on stage with me and, yes, they are part of the show; no one has to act or dance, just sit there and look good and play their instrument! But, definitely, I think of the orchestra as the third character in the show. These very powerful jazz musicians add a lovely flavour to the show; it’s kind of old school, which is what we were looking for.”

Are you taking it anywhere after Cabaret Festival?

“Hopefully,” iOTA says. “It’s not always easy to get a show up that hasn’t really proven itself yet, we are so fortunate that Julia [Zemiro] approached me about doing something. I was just lucky that I had this show; it was a perfect platform to leap off, Adelaide Cabaret Festival has great cred, along with visitors and artists from all over the world.”