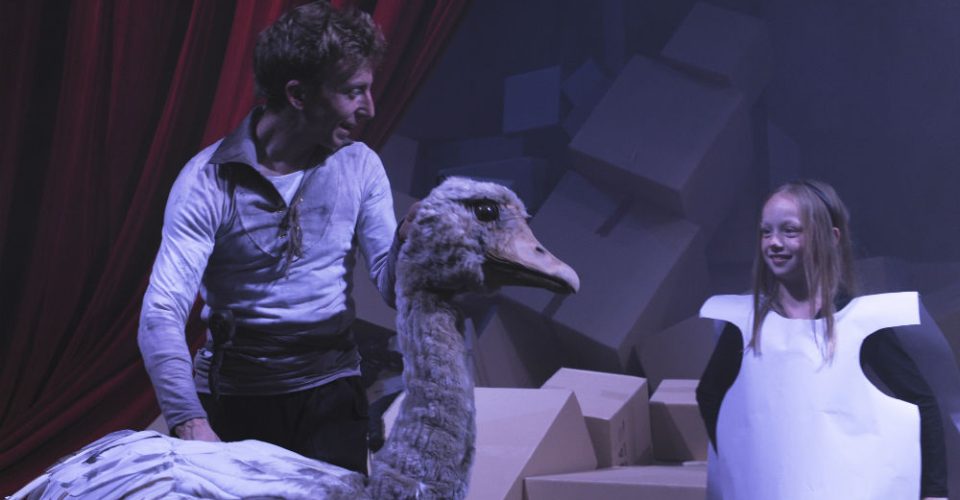 Have you read any fairy tales lately? To get you started perhaps you could head down to the Odeon Theatre, Norwood, to see a brilliant insight into the mind of Chiara Guidi, of renowned Italian performance collective Socìetas Raffaello Sanzio. Working long distance and sometimes here in the flesh, Guidi has been facilitated by the talented thespian Jeff Stein, who met Chiara whilst in London watching her shows.

We talk with Jeff about his Adelaide Festival 2015 children’s show and ask for his first impression of this well-known theatre society Chiara directs?

“Chiara is a theatre-making master. I first saw her and her company actually in Adelaide. Perhaps it was about 2002? Regardless, they performed Julius Caesar. It actually blew my mind. It’s the kind of work that when you leave you actually can’t speak. I had no language to speak about what I had seen – so I went again hoping for a little more clarity in being able to at least speak afterwards and found that again, I was beguiled. I couldn’t believe the quality and the power of their performance. I was bewitched- it was an amazing pivotal point for me as I was realising at the time that I was getting tired and complacent in my own theatrical world. I was tired, I was unsure of where I was heading. Really seeing this performance reinjected the passion for me; I started again as an artist really. Like a kid – I think this mentality is required really for the art as you need to have that kind of childlike enthusiasm.”

So how did you come to meet her in the flesh? Was it that night?

“No, the funny thing about that is- you know how Australians when offered an email, a phone number for overseas, will very likely take up that complete strangers offer to crash on their couch? Meet them for a drink overseas? Well I find it funny they sometime people do that- and then you take them up on it. Even if it is a couple of years later, as in my case. It makes me laugh thinking about it, but the truth is they offered me a number and the next year when I was in London I contacted them and was invited to see some of their work.”

What did you see in London that made you want to collaborate with the company?

After seeing some devastatingly beautiful shows, and thirsting for more, I asked whether they had any more shows that were going to occur whilst I was over there. Yes, they said, it’s a kid’s show. I was kind of stunned, I didn’t actually get it.

Anyway I saw the version of Tom Thumb they put on and again, it really blew my mind. The sets were great, I mean when the audience walked in there was about 50 beds, and you were expected to get in one. I mean, they were the seats. You tucked yourself up and listened to an old woman tell a story. Another amazing thing about this set construction was the fact that the whole stage and all our beds was actually inside a box. It was like a resonance chamber. So there was a sound crew on the outside, throwing- well I don’t know – rice on the roof- to recreate the sound of rain. It was simply amazing. I can’t really tell you how good it was- it was an extraordinary piece of theatre. It just so happened to be a kid’s show, but it wasn’t actually relevant. It just went on like a lightbulb that that is simply a different style.”

So you fell in love then?

“It really just reinspired me, and made me look at another whole genre differently. I had to really work hard encouraging Chiara to do another work as she was about to commence another kind of work, she does some training with the voice, kind of musical theatre and voice training really. At that time I got a residency with the Campbelltown Arts Centre and then was gifted three years of support which was just amazing. We got twelve Australian artists and children also, and hung out together in a workshop style event so she could understand how Australians worked, and approached theatre. It was zany. Just fabulous.”

What can the audience expect?

“Well certainly not the fairy floss that can be theatre for some young people. It is really whilst not be actually dark, certainly not hiding from the fact that there is often a dark message contained within most fairy tales. We have Skye Gell­man who I believe is an Adelaide artist, as Jack. Skye is an aerialist and does these amazing things- in the air. It’s spectacular. It’s a human look at a very well-known story, and you get to see some amazing theatrical special effects. It really assist kids to learn how to deal with humanity when you actually share the truth a little. That doesn’t mean this is an 18+ show, just older kids will get some of the curious questions about people and life if they are paying attention.”

Kind of like a fable. In a literary sense- you can take it at face value and simply enjoy a plain story, or realise there is so much more and so many facets to the tale under the surface.

“Yes that’s right. We don’t actually want to harm children or put them in harm’s way, but some of these messages are more meaningful and deeper I guess, and they don’t always have to be sheltered by absolutely everything. I feel like we provide a safe space in this show to raise other questions and views of something they may feel they already know very well. It is a great show exactly for ages seven and over, just the right age to encourage outside thinking and examination of people within the context of a story that they will love as a stand-alone performance anyway.”

Jeff Stein performs Jack And The Beanstalk at Odeon Theatre at various time on Sat Feb 28 until Sun Mar 8.