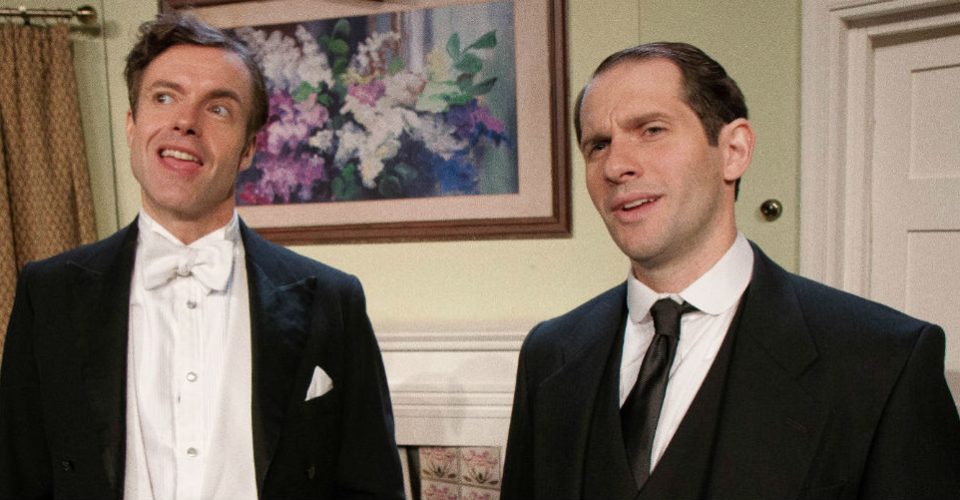 After three successful tours of the UK, a season in Mumbai and a sell-out year on London’s West End, Jeeves the calm and level-headed valet and the charmingly incompetent English gentleman Bertie Wooster are heading to Adelaide for a very limited season at Her Majesty’s Theatre to present the 2014 Olivier Award-winning Jeeves & Wooster in Perfect Nonsense.

Starring Joseph Chance as Jeeves and Matthew Carter as Wooster, along with co-writer Robert Goodale as Seppings the butler, we speak with Director and co-writer David Goodale, via email, and begin by asking for those here in Australia that may have never heard of Jeeves and Wooster, to please give us an overview of this popular British series.

“As a double act, Jeeves & Wooster are one of the great comic creations of the English novelist, P.G. Wodehouse, whose writing has probably inspired much of the best of British comedy over the past 100 years – ranging from Monty Python to Fawlty Towers to Blackadder. The upper-class twit, Bertie Wooster and his inscrutable manservant, Jeeves feature in 35 short stories and 11 novels (written between 1919 – 1974), which continue to delight readers of all ages today.”

Originally starring Stephen Fry and Hugh Laurie, what was the process for you to find actors to fit the same bill?

“There have been several TV and film adaptations of the Jeeves & Wooster novels, but the Fry and Laurie series was probably the most memorable,” he says, “and ran for more than 20 episodes.Many Wodehouse purists would say that they were perfect casting, so they provide a useful reference point for us, but that doesn’t mean that our actors are trying to imitate Fry and Laurie. There’s plenty of substance in the books to allow them to find their own interpretations.”

The relationship between Jeeves and Wooster, would you say it is somewhat brotherly in their comical interactions with each other, as opposed to boss and gentleman’s aide?

“Jeeves and Wooster are master and servant, not friends, but nonetheless they are totally devoted to each other,” David says. “Somebody once described Jeeves as being like the perfect parent who, whilst often disapproving of their child’s antics, is prepared to let them mess up before ultimately coming to the rescue.” 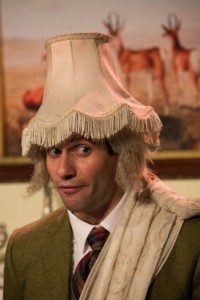 Tell us about Joseph Chance and Matthew Carter. Have they performed together before and what kind of perfect match have they made for each other as part of performing in Perfect Nonsense.

“Joseph and Matthew, our latest Jeeves and Wooster, are brilliantly matched. They had never worked together before this, but they share a sense of humour and completely understand the characters they’re playing. Matthew’s involvement with the show started with him understudying Bertie in the original production. When he was called upon to stand in it was obvious that he had all the qualities required to make the part his own. Joseph had worked with Robert on a couple of productions in the past and it was Robert and I who recommended him to our producers. They were so impressed that they signed him up on the spot.”

This stage production, based on the classic literary works of P.G. Wodehouse, is co-written with your brother Robert. Was it an enjoyable process to have worked so closely with each other on this project? What was his decision to return to the role of the butler?

“The script actually evolved from a one-man show that Robert performed, and I directed at the Edinburgh Festival in the early 1990s,” David explains. “As an actor, Robert had been looking for a vehicle that would give him the opportunity to play a whole range of comic characters, and P.G. Wodehouse’s The Code Of The Woosters leant itself perfectly to just such a show.

“About five years ago we were encouraged to consider reviving the show, but we decided it needed a more contemporary twist so we went back to the drawing board. As siblings we have always shared a very particular sense of humour, and this always comes back to the fore when we’re writing together. In the original production Robert played all the parts – In Perfect Nonsense he plays the elderly butler, Seppings, who goes on to play a whole range of other ludicrous characters.”

Why does Wooster have to steal a silver cow-shaped cream jug from Totleigh Towers and what does this have to do with suddenly becoming a matchmaker?

“Wodehouse created the most beautifully convoluted and complicated plots in which the most trivial issues become matters of life and death,” he says. “Bertie is summoned to a stately home to help save his best friend from being dumped by his fiancée. By an extraordinary coincidence Bertie’s Aunt Dahlia is determined to steal a piece of antique silverware, which rightfully belongs to her husband, from the owner of the same stately home. If Bertie fails in his missions the consequences will be dire – his aunt may never invite him to dinner again (depriving him of some of the finest food known to man) and he may also be forced to marry his best friend’s truly ghastly fiancée himself.” 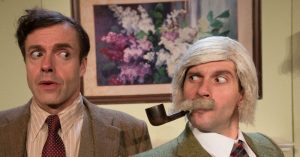 Each performer plays a number of characters. Please tell us about these roles.

“As soon as the curtain rises things inevitably start going wrong, but Jeeves is waiting in the wings with his butler friend, Seppings to save the day,” David says. “They initially take to the stage to play themselves, but as the story unfolds they go through a series of frantic costume changes to play all the other characters, ranging from a pair of young lovers to a wannabe fascist dictator and a bombastic old aunt. The show appears totally chaotic, but it’s actually very carefully choreographed.”

What do you think has been the charm of Wodehouse’s literary works, and do you feel they still hold relevance today?

“The Jeeves and Wooster novels are essentially light-hearted escapism, rooted in an idealised, carefree 1930s England, but P.G. Wodehouse’s sense of comedy is timeless. Perhaps if we’d done a conventional adaptation it might feel a little old-fashioned, but by turning it into a ‘play within a play’ it feels entirely contemporary.”

How close would you say Perfect Nonsense is to that era of British aristocracy, pomp and place?

“Although Perfect Nonsense is ostensibly set in the aristocratic world of Britain in the 1930s it’s very much a satirised version of that world,” he says. “All the aristocratic characters are and larger than life and deeply flawed. It is only Jeeves, the manservant, who retains his dignity throughout.”

It’s interesting how the characters narrate the story as well as performing the roles.

“The Jeeves and Wooster novels are written in the first person, as if by Bertie, and it’s that first person narrative that contains some of the funniest lines,” David says. “In a conventional dramatisation there wouldn’t really be a place for a narrator – but the idea behind Perfect Nonsense is that Bertie, encouraged by his idiot friends into believing that he is a brilliant storyteller, has booked a theatre to perform his own one-man-show. With the help of Jeeves and Seppings, Bertie acts out the whole story, occasionally stepping out of the action to talk directly to the audience.”

Have your or your cast members performed in Australia before?

“I first came to Adelaide in 1996 to see Robert, my brother, in a touring production of a play called, The Queen & I at Her Majesty’s Theatre,” he recalls. “So, twenty years later, it’s really exciting to be back in town and at the same theatre with our own show. As far as I’m aware, this will be the first time in Australia for the rest of the cast and crew, so there is huge excitement about this trip.”

Jeeves & Wooster In Perfect Nonsense performs at Her Majesty’s Theatre, at various times, on Tue 30 Aug until Sat 3 Sep.

Click HERE for your chance to win a Double Pass to see Jeeves & Wooster In Perfect Nonsense at Her Majesty’s Theatre from 7.30pm on Tue 30 Aug.