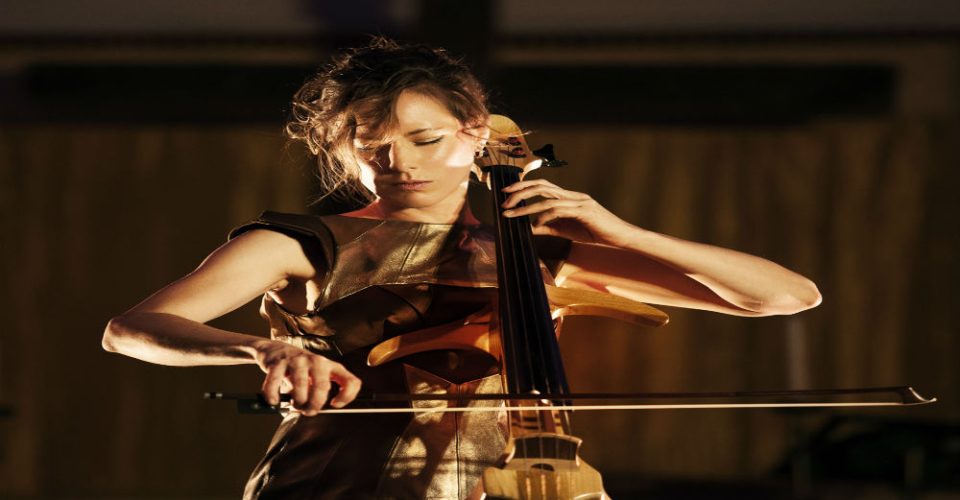 Jo Quail is a cellist and composer from London, UK, who plays a Starfish electric cello with Boss loops and effects pedals – a virtual one-woman orchestra! Jo will be performing music from her albums ‘From The Sea’ and ‘Caldera’ and it looks and sounds something like this…

Adrian Miller speaks with Jo via email. Here is what Jo has to say

“My first solo performance was in a tiny pub in Brighton, UK in 2010, and it was nerve-wracking and great fun! It went very well, though at the time I was very new to the technology I’m using now, and it was far more (unnecessarily) complicated than it needed to be, with keyboard, channel selectors, loads of stuff I now don’t need!”

“My own parents! My mum is a cellist, she began learning as an adult, the same time I began as a child, and she has always been a great inspiration. My dad is responsible for introducing me to Pink Floyd, The Kinks, Tony Joe White, good classic rock in short. Outside of actual parents my teacher Gwyn Pritchard is a constant presence even though with Gwyn I focus on traditional repertoire – I find it all feeds in to what I write and perform in my own music. And Jos Pijnappel, my great friend and also conductor when I perform my music with ensembles and orchestras, Jos is always someone I call when I’m either stuck with something or excited about a piece, and he offers great encouragement and sage advice. Including the immortal line ‘Stop what you’re doing, drink a glass of wine and listen to 80s rock!’ during a particularly taxing moment in my latest work This Path With Grace. “

“I work with all sorts of musicians, so that would be a huge list, as they are all inspirational. From a cello point of view I love Steven Isserlis. Matt Howden (violin/vox) and Jordan Reyne (guitar/vox) are superb musicians, both fellow loopers and good friends of mine, I always feel uplifted and inspired watching a concert of theirs.”

“I’m very lucky, I’ve just had this experience! I performed a big concert here in London last Saturday with a cello quartet and they are superb! Anna Scott, Laura Passey and Raf Ottonello. All very different cellists and unique in their approach to our instrument, but unified in their generous musicality and good vibe. I also had Daniel Merrill on violin, he’s awesome, and Al Richardson on percussion, who one interviewer described as a ‘secret weapon in human form’! Plus the Green Army Choir, super musicians and all of them great and treasured friends. “

“Nine Inch Nails’ The Great Below but sadly you won’t hear that on this tour as I need a cello quartet to play it! It’s not a looper…”

“Gosh. Too many to mention! Probably Tom Petty Won’t Back Down is most appropriate. But we used to laugh like drains at David Lee Roth’s ‘Vaccinated by a phonograph needle one summer’s day’ from A Little Ain’t Enough’. Not sure why really, it’s not that funny but it seemed so at the time!”

“Best gig – so far it would be last Saturday in London, and last March in Gdansk, Poland where I was accompanied by orchestra Cappella Gedanensis, absolutely brilliant orchestra and such superb individual talents there too, I was utterly humbled. Worst gig, well, there’s iffy bits to each and every gig. The only one I’ve had a really funny vibe at was in September last year, I knew it from the moment I walked in to the venue and I was really keen not to perform for some reason – it just felt ‘funny’ in there, something ‘wrong’. Not with the people, the other acts, just something else. Anyway I did it. People said afterwards it was a rather cathartic performance. !!!”

“I ride motorbikes quite fast. Not so much since I’ve had my daughter though! And I can make good stews.”

“I write all my dreams down in a little spiral bound book. I’ve been doing this for years. The net result is that sometimes I recall dreams as clearly as reality, in fact more so because they are written, whereas I don’t keep a diary of daily events.”

“Lots! My memory goes a long way back, so I have a vague recollection of learning to walk, and of trying to climb on the hospital bed when my sister was born. Most cherished memories are bundled together as the time we spent on the East Sussex coast as kids on holiday, pure summer, long days, full of adventure.”

“Steven Isserlis. I said a load of rubbish to him. I’ve met lots of really great musicians and artists in my session work, but it’s only Mr Isserlis that rendered me idiotic.”

“Intolerance and lack of empathy, I guess. Just being able to appreciate something from another view, not having to agree.”

“My husband. We are both freelance workers in our fields, and it means we don’t see each other as much as perhaps is considered normal, and I still have a flip flop feeling when I see him!”

“Best advice, Jos with ‘have a glass of wine and listen to rock’. It is usually a sensible thing to do if in doubt.

“I would like to have been more mature during my study years and more confident as a cellist, but if that were the case I daresay you and I wouldn’t be chatting now, as all things would be different, not worse or better just very different.”

“This time with dynamics! That relates to our quartet work, that’s the most uttered line during our rehearsals. Otherwise it would be my personal motto which is ‘do it with verve and aplomb’. Regardless of what you’re getting in your monitors. !”