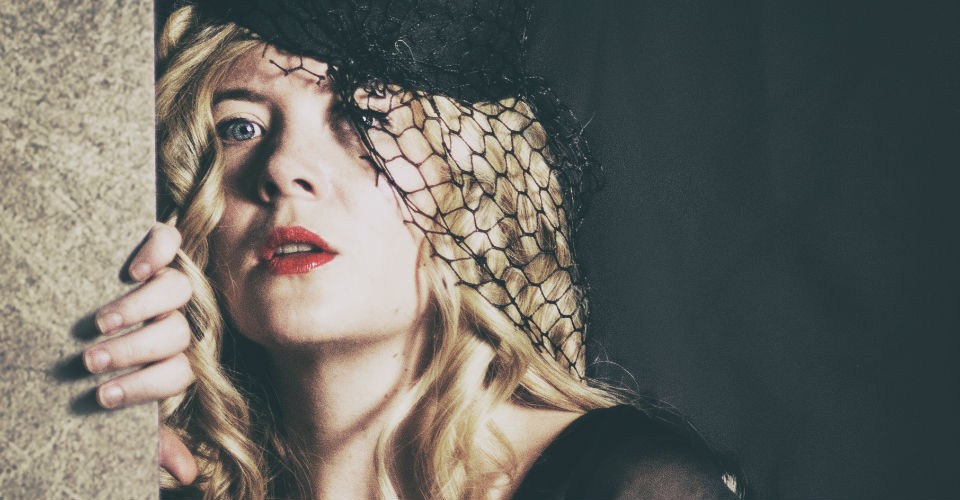 When a star performer rises from Adelaide, they tend to shine extraordinarily brightly and with so much jaw-dropping talent that the rest of the world wonders where they have been hiding. Joanne Hartstone is such a rising star and she has already captured the attention of the theatre world in Edinburgh, Hollywood and New York, as well as her hometown Adelaide, with her multi-award winning one-woman show, The Girl Who Jumped Off The Hollywood Sign which she is performing in the Adelaide Cabaret Festival 2018.

We speak with Joanne, via email, and following the success of her marvellous 2018 Fringe hit, also a self-penned and performed one-woman show, That Daring Australian Girl about Edwardian Adelaide’s own Muriel Matters; actress, activist, suffragette and teacher who became the leading speaker in England for the suffragette movement there (South Australian women already had the vote). We ask what inspired her to write The Girl Who Jumped Off The Hollywood Sign.

“My Grandmother is really to blame,” Joanne begins. “When I was a very little girl, my Grandma Joy sat me down in front of Singin’ In The Rain and my love affair with movie musicals began. I devoured anything with Judy Garland or Marilyn Monroe. Much to my brother’s chagrin, I would watch Meet Me In St. Louis on a daily basis and know every line of dialogue, every melody, every dance move. I would mimic the women on the screen in front of me, recreating Marilyn’s faux-dumb-blonde, or Judy’s girl-next-door to a willing audience of teddy bears and Barbie dolls.

“Luckily, my parents encouraged my interest in performing, and enrolled me – at the tender age of four and three quarters – in a modern ballet class. I simply could not wait to perform. And perform I did! The next twelve years of my adolescence was filled with dance classes, singing classes and, most importantly, acting classes – but my personal style was firmly cemented by my early exposure to movies from the Golden Age of Hollywood. I didn’t listen to pop music like my peers; I listened to my Grandmother’s records and jazz CDs from a time I only knew in black and white and the occasional Technicolor.

“Fast forward past drama school to living and working as an actor and theatre producer in Adelaide, Sydney and London, and forging a career over thirteen years in the Performing Arts industry,” she adds. “Then I discovered I had a story I needed to write and tell: a tale which incorporated the lives of my idols, the women who led the way for my artistic life and inspired me with their talent, their style, their voices and, as I would later learn, their enormous energy and personal sacrifice. My own kind of fan fiction emerged.”

Who did you work with to produce this show?

“Even though I had written a one-person play, I knew that I could not make this production in isolation. I gathered together colleagues, family and friends… and put them to work,” Joanne says. “This solo show was made by: a production designer, director, choreographer, stage managers, sound technicians, multiple production assistants, musicians, text editors, test audiences… and my Mum made my costume.

“I asked my friend and fellow performer, Vince Fusco, to let me use his critical eye in the development process, and his direction and dramaturgy in the weeks leading up to the World Premiere were invaluable. I also had the technical assistance of Lucy Mitchell and Marco Marando – ex-students of mine and now professional theatrical practitioners – and Holly Robin who ran lines with me, sat in rehearsals, gave feedback and offered suggestions.

“However, it wasn’t until the season in Edinburgh that my collaboration with Lighting Designer Tom Kitney began. After he saw my smaller-scale Fringe production, he and I developed an up-scaled ‘New York’ production – incorporating a to-scale replica of the Hollywood sign ‘H’. Tom enhanced the show with his intelligent ‘Technicolor’ design – and it is this incarnation of The Girl Who Jumped Off The Hollywood Sign that we are bringing back to South Australia for the Adelaide Cabaret Festival.”

I believe you won some awards in the 2017 Adelaide Fringe. What were they?

“In the 2017 Fringe I was the inaugural winner of the ‘Made In Adelaide Award’. This is a $10,000 grant to take the show to Edinburgh, as well as the accolade of the Award. I also won the 2017 ‘Holden Street Theatres Award’, giving me an opportunity to make and present a new show. I used this to create my latest solo show – That Daring Australian Girl based on the life of South Australian born Muriel Matters, which premiered at Holden Street Theatres in the 2018 Adelaide Fringe.”

Then you took the show to Hollywood and won more awards there. Tell us about that.

“Taking the show to Hollywood seemed a natural step for The Girl Who Jumped Off The Hollywood Sign – and I was eager for locals to see my work and give it their stamp of approval,” Joanne says. “The reaction was even more enthusiastic than I had expected, particularly the reaction of female actors in Hollywood. Women told me that they saw themselves in Evie Edwards – that my character represented all the Hollywood hopefuls that have continued to flock to the ‘Star Factory’ since the “talkies” took over the movie industry.

“Hollywood Fringe brought more awards and nominations for The Girl Who Jumped Off The Hollywood Sign, as well as glowing reviews, enthusiastic audiences and the Hollywood Sign Trust seal of approval. I was even invited to have a photo shoot at the sign – an exclusive privilege that I will never forget. Scaling down the side of Mount Lee via rope to get to the sign gave me even greater perspective of the height and stature of the iconic and symbolic landmark. I can assure you – it is a long way down… over 300 feet with nothing to slow a trajectory. I felt a sense of privilege and responsibility giving voice to the journeys of many other women and men who worked in Hollywood, well before my time. The legacy of their work still pulses through the machinations of Hollywood and affects the lives of dreamers and artists across the globe.”

Where else has your show been performed?

“It was humbling to present The Girl Who Jumped Off The Hollywood Sign in Los Angeles, and subsequently at the Edinburgh Fringe – where we sold out our season and gathered a mass of excellent reviews,” she says. “Following this, we had a season in New York which was (unfortunately) timely – while the world was still learning of the extent of the #metoo movement, and the revelations of the abuse of power in the entertainment industry. We even coincided with the Golden Globes #timesup launch – where women wore black in solidarity. Reviews noted the parallels, and our production was heralded as historically and socially important in several publications.”

“The subtext of this play is permeated with abuse against women, which mirrors the public outcry by women—women, not only in the entertainment industry but many in professional sports and businesses—women crying out against abuse by men with power over their professional lives and their incomes. Here art certainly mirrors life. I doubt that Hartstone realized that when she wrote the piece, but its timely production at the Theater for the New City, in New York City, has served an important purpose in an historical and social sense.” – The Epoch Times

What can your audience expect?

“This show looks at the Hollywood Star-System through the eyes of the past – where we can appreciate our present circumstances with clarity, and perhaps learn how to be better in the future. Adelaide Cabaret Festival audiences can expect a terrific story, nostalgic music, beautiful production design, the sound of yesteryear, and an emotional journey of ambition, hope, sacrifice, and self-determination… with the Hollywood Sign ‘H’ looming in the background as a constant reminder of (almost) certain tragedy to come.”

Where are you taking the show after the Adelaide Cabaret Festival?

“After the Adelaide Cabaret Festival, we’re heading back to the Edinburgh Fringe. I am pairing it in a Repertory season with my other solo show That Daring Australian Girl. As 2018 is the Year Of Women, I feel it is important to keep telling these stories to as wide an audience as possible,” Joanne says. “We will be performing each show (alternating daily) for over three weeks at Assembly Festival – George Square Studio Two. I then hope to continue touring across the UK and Europe and America, as well as creating new work in Adelaide for 2019.”

Joanne Hartstone performs The Girl Who Jumped Off The Hollywood Sign at Space Theatre, Adelaide Festival Centre, at various times, from Sat 16 Jun until Sun 17 Jun.