John Corabi Acoustic & Solo Tour: The Return Of The Mayor Of Rock ~ Interview 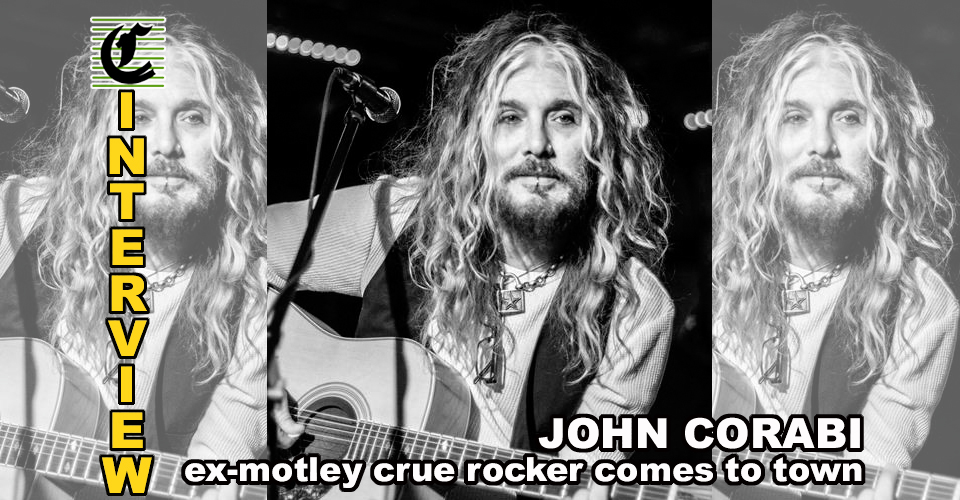 For the first time since 2018, American raspy vocal powerhouse John Corabi is returning to Australian shores with his new personalised solo acoustic show. Affectionately known as the ‘Mayor of rock and roll’, Corabi has lent his vocal prowess to The Scream, The Dead Daisies, Union, ESP and, perhaps most notably, Mötley Crüe during Vince Neil’s departure in the early ‘90s. As a seasoned veteran of music performance and no stranger to the antics of ‘80s rock star splendour, John Corabi brings an intimate experience with anecdotal deliciousness that fans will adore. On the eve of the release of his autobiography Horseshoes And Hand Grenades, this is an opportunity for rock music lovers to really sink their teeth into the life and career of one of the most recognisable voices in rock.

Surprised, excited and outwardly cheerful about his upcoming tour, John speaks to The Clothesline about his new show, his autobiography and his adaption to the new world of music. We start by asking about his recent trips to Australia and what he’s looking forward to upon his return.

“Honestly, I’m just beyond excited to start getting back to work again,” he says. “This last two and a half years has been brutal for everybody. Not just musicians, but everybody – crew guys, light guys, sound guys. The music industry really took a kick in the balls from this thing [COVID-19]. So I’m just happy and grateful to be going back to work. And I gotta be honest with you I didn’t think I’d be going to Australia any time soon because you guys were really locked down. This trip is happening really quick, so I’m keeping my fingers crossed there’s no other weirdness with any other variations of COVID, and hopefully, we’ll get through this unscathed.”

The conversation turns to previous tours of Australia, and John offered this anecdote about his last visit to Australia in 2018.

“I did the Mötley 94 shows there with my full band. But, dude, that trip was brutal. We flew into town; we had that night off, we had dinner, slept, got up the next day and did Sydney, Melbourne, Brisbane and then Adelaide. And then literally went from the club in Adelaide to the airport, flew to Sydney and then back home. That one was rough, man!”

So tell us a little bit about the show! What can Aussie punters expect to see at the solo gig?

“It’s just a little bit of all the music I’ve done in all the different bands,” John says. “When I first started doing these things, I used to think, ‘Oh man, I’ve gotta do three songs from this record and five songs from that record’. And then I would find myself at the end of the night just telling stories; why I wrote a particular song and how that song came to be. So I decided to incorporate my storytelling into the set.”

I’ve noticed you’re actually rather good at that! I saw a concert where you were telling a story in this fashion, and there was this guy heckling you the entire time. You didn’t get angry; you made it fun and ran with it. It was incredible to watch.

“Y’know what? It’s gonna happen,” he says. “I try to get a lot of the venues to put up a sign saying that it’s an acoustic show, so try to keep the noise to a minimum and enjoy the show. But you’re gonna have one of those guys every now and then. The idea is to have fun! In most cases, I don’t even write up a set-list. I do the thing; I tell my stories, I have fun with it. Even if the stories are somewhat serious, I try to keep them light, so it’s nothing depressing. I make fun and have fun with the stories. Even if someone is giving me a hard time, I will literally just sit there and go, ‘Oh, okay! You obviously want to be a part of the show!’ So at that point, I make that person a part of the show. I razz them; I kid them. As soon as they start talking, I go, ‘Hey, listen, no disrespect but just shut your fucking mouth!’ Y’know what I mean? And the audience doesn’t seem to mind. Y’know, dude. We only go around once on this fucken ride, so I just wanna have fun with it. That’s it!”

Are we going to be able to buy some hand grenades and horseshoes at the gig? Have you got some custom merchandise? No, I’m just kidding!

“I was only able to get the hand grenades into Australia! Apparently, horseshoes are really illegal down there!” he laughs, going along with the joke.

Yeah, no. You can’t have those here [more laughs]!

Serious question: The title of your book Horseshoes And Hand Grenades is basically a proverb which means, ‘Being nearly successful isn’t the same as being successful’. Now, I imagine you’re rather happy with your career and what your life is looking like right now. What was the inspiration behind the title?

“My dad was the king of really dry quips, John says. “I remember saying to that I thought my ship had finally come in’. Y’know, and that’s a phrase we all use like. And my dad says something like ‘Oh, your ship’s coming in, huh? Well, don’t be at the fucken airport [laughs!]’ Because half of the record is old songs that I reworked into acoustic versions and some new songs, I joked with Dad that I was thinking about calling it John Corabi’s Almost Greatest Hits!’ and he goes, ‘or you could just call it Horseshoes And Hand Grenades’, And I go, ‘what does that mean?’. He says, ‘Y’know! Horseshoes… Hand grenades… You don’t got to be on the money, you just got to be close!’ So I wrote it down.

“And it was funny, when I was actually doing the book with Paul Miles and started rereading some of these stories again, I kind of came to the conclusion that I truly am the king of being at the right place, but always at the wrong time. I mean, let’s be frank if you look at my career, I’ve had a very blessed career, and I’m still going. But at the same time, there’s been some weird excuse or like, this happened or that happened for every band I was in and every record that I’ve ever done.

“And something has happened, whether it was the music industry changing or it was going from ‘80s to grunge or whatever the excuses were, that was just my deck of cards, and I dealt with it. But the funny thing of it is, there’s always been some weird thing where the records then did okay, but then ten, fifteen or twenty years later, they become these little lost gems. And of course, anybody that does this would love to have Steven Tyler’s, Bruce Springsteen’s or Nikki Sixx’s bank accounts, so I just kinda took the piss out of myself and decided to call the book Horseshoes And Hand Grenades. Because maybe the stars kinda lined up for me but not totally? Ha! And that’s just my story. But I’ve embraced it, and it is what it is.”

We suggest to John that it may also be a testament to his songwriting and performance skills.

“Boy, are they in for a letdown!” he laughs.

I see you’re getting into your first foray of self-production. How does it feel to have this kind of autonomy with your recording and songwriting?

“That was one of the positives I can take away from COVID. If I can be frank, my entire world shut down and it was a cold hard realisation that I really depend on a lot of other people. So I took Pro Tools classes and also wrote the book with Paul. And when we weren’t writing the book, I was reading the notes from the classes.

“I started recording myself in my bedroom from a laptop, John says, and then I take the song as far as I can before sending the files to [songwriter/musician/record producer] Marti Frederiksen who gives everything a warmer sound that what my basic set-up can’t do. But y’know, it’s kind of exciting, man. I love trying to figure out a drum pattern and fixing all the parts, adding guitar and vocal, write some lyrics, and it’s slow, obviously, because I’m still figuring it out. But I’m moving forward.”

Great work on the new tunes Cosi Bella and Your Own Worst Enemy! I imagine this is the beginning of a new album?

“Yeah, I’m still kinda figuring this whole new method of doing shit. It was Marti that brought this all to my attention. He was like, ‘Dude, people aren’t buying records anymore. Why are you doing an album? Y’know where you’re gonna sell your records? At your shows, maybe Amazon, on your website? Do a song, do a video, let it sit for a few months while you work on new material.’ So that’s what I’m doing. I dunno if I’m doing it right or wrong, but that seems to be the way everyone’s doing it. This is me riding on everybody’s coattails.”

Any last thoughts you’d like to tell the readers of The Clothesline?

“I think we’re doing Sydney, Melbourne, Brisbane, Adelaide and Perth. There was some talk about a possible – and again, I don’t know – they were asking me if I want to do a show in Newcastle, and I’m like, ‘Dude, fuck, I’m there. Let’s do it!’ There’s gonna be some in-stores for the book, but this is happening very quickly and at the last minute, John concludes. “So everything is subject to change – except for the dates that have been posted.”

Bookings available at Silverback Touring and MoshTix. Click HERE to purchase your tickets.