John Waters & Stewart D’Arrietta Share the Life and Songs of John Lennon in “Lennon: Through A Glass Onion” – Interview 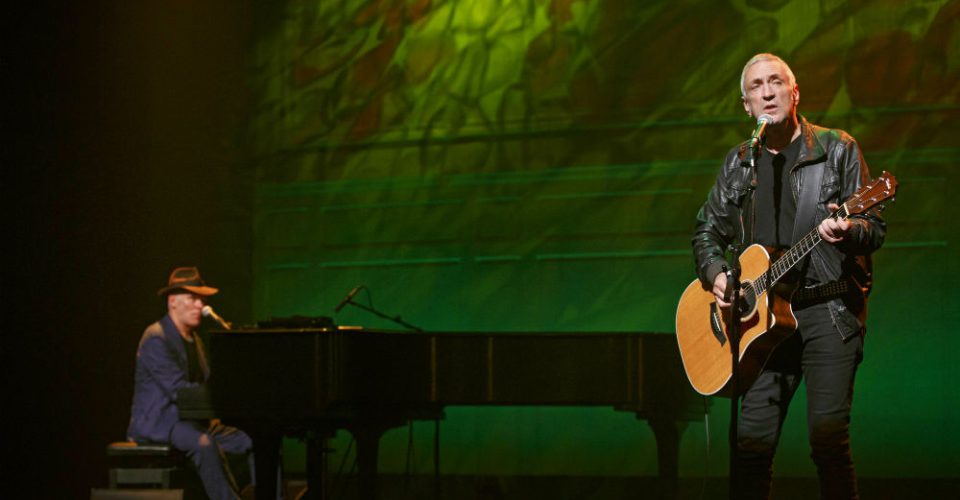 Now John Waters continues his musical partnership with singer/pianist Stewart D’Arrietta by bringing his timeless biographical concert to Her Majesty’s Theatre for three performances only.

John is at is home in NSW when we speak about the show that has toured Australia many times since 1992.

“Re-branding the title as Lennon: Through A Glass Onion was one of the first changes we made for the New York season; putting ‘Lennon’ in the title was something the Americans required,” he begins. “I’m well known enough in Australia for people to be able to look up the show and recognise that it’s me, so their interest is held. When they don’t know the performer, it’s less of a hook to grab people with. Glass Onion is the song title and Looking Through A Glass Onion is the refrain in the chorus; to me, it’s better but I’m happy to go with the new title.”

This is a show about an Englishman, by an Australian – how was it received in America?

“When we opened in the Off-Broadway venue called the Union Square Theatre, the show was mainly regarded as something that was newly created,” John says. “We couldn’t afford a huge amount of publicity but there were a few articles printed. As far as the Americans were concerned I was an American artist – but the gradually found out that it was me. I went by the name John R. Waters so as not to be confused with the famous American film director who did Hairspray, Pink Flamingos and other slightly left-of-centre movies. 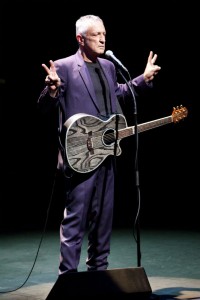 “People picked up on the show without regard to where anyone came from and appreciated the show for what it was. It was in Liverpool dialect so people I spoke with after the show thought I was from there. I explained that I was born in London but spent my career in Australia, and that Stewart is Australian – which they could from tell the moment he opened his mouth; they really loved that. The NY audience is much more sophisticated than America as a whole – it’s almost like another country really.

“Many Off-Broadway productions come from France, Spain, Romania and other European companies that tour there, so it’s much easier for them to get a foothold,” he adds. “Tourists tend to go see the big Broadway productions, but the Off-Broadway and Off-Off-Broadway theatre scene is massive with, I believe, a lot more stimulating material that does on there. It’s that scene that I like to be a part of and it’s obviously where our show belongs anyway.”

Lennon’s widow Yoko Ono is in charge of not just the Lennon solo career songs but also the imagery and naming rights of all things related to his Intellectual Property. Yoko has been completely supportive of this show, do you know if she has ever attended a performance?

“No, she hasn’t. The show has a violent sound effect of gunshots at the beginning, and again at the end, so I don’t expect Yoko to sit through theatre reliving those moments; she was there at the time,” John says. “You can’t blame her, or any of his family, for that. But she has seen the DVDs and the script to paycareful attention to what is happening. I’ve not had a personal conversation with her, but she sent a personal communication while in NY; a signed photograph with ‘Best wishes’on it. It indicated to me that she takes a lot of personal care with the use of the image of her late husband.

“Cynthia Lennon, his first wife, came to see the show in Sydney about ten years ago. We didn’t actually know that she was there at the time, but it was reported by mutual friends that she thought it was great.”

John explains that they continue to tour the show throughout Australia, suggesting that people know the show through the many theatre performances and country touring that they’ve done. Even with the longevity of the show, John is pleased to often see people return to see the show a number of times and feels that they will enjoy this acoustic version of Glass Onion. We ask how he and Stewart began working together on this show.

“I had the original idea and then enlisted Stewart to join me because he is such a great musician and a close friend – he was just what I needed; I wasn’t going to stand up there with an acoustic guitar alone,” John says. “I also utilise him in the show in the sense that is personality is very big. I wanted more that just an accompanist but someone to be a part of the show with a few interjections here and there.

“Initially, though, I had been approached by the owners of the Tilbury Hotel’s Cabaret Room in Woolloomooloo in Sydney because they had a gap and asked if I wanted to do a show for the Jan ’92 season. Although I had less than a month to put it together, that idea I had running around in my head to somehow tell John Lennon’s story through the songs with a bit of monologue – more like a TV documentary than a story. So I wrote the words, we chose the songs and which bits of the script we were going to use, worked out how we would run them all together into one seamless piece… and, night after night, people were hanging from the rafters! We realised we had done something right here and have continued to tour the show in small theatres ever since.

“The way we present this show really connects with the audience,” he continues. “There is a very strong emotional line woven into the storytelling aspect of the show, which is what separates a theatrical piece from a concert of songs. I find that that emotional content is just there: the love of man for his muse – which Yoko became; Lennon’s admission that he was a bad father the first time around; the flowing of all of that just at that moment that he was gunned down – it is very moving and tragic.” 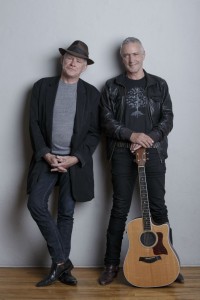 Knowing people that have seen the show several times, the emotional reaction from the dramatic opening to the story, the heartbreak and the joy and, of course, the songs performed by a band and string quartet still cause a reaction every time.

“I’ve heard many people say the same thing. Performing it as a two-man show, I feel, is even more powerful. The music has been deconstructed and is performed by myself and Stewart D’Arrietta – who is much like a one-man-band anyway. It’s really a four-man show because both elements play a huge part in the performance. The degree of personal contact with audience is really amplified with a complete concentration on the lyrics of the songs and how they relate directly to the life of the man, while remaining small and intimate in sound.

“If we ever do another big concert tour, it will be with the band and the string section, which will be just as enjoyable.”

Being as emotionally touching as it is, have you seen tears from people in the seats during these close-up and intimate performances?

“I know when the audience are moved, I can hear a few stifled sobs, and sometimes you can hear a pin drop,” John says. “There are some amusing moments but it’s not a show filled with funny gags; they tend to smile loudly, if you like. I can hear that as well. It’s a great buzz as a performer to have people listening so intently.”

Has much changed in the way the script or the song choices?

“Not really. There were a few tweaks here and there to make the language more relatable to the American audience, but it was still done with a Liverpool dialect. It was also under the advice of those that were presenting the show in the US to not have a break in the 90-minute performance; the bubble never bursts so I enjoy doing it that way. It will be the same for our three Adelaide performances.”

That really allows you to keep a grip on people.

“Absolutely,” John agrees. “And we have been getting a lot of great feedback. What I feel from this last tour, and since returning from the States, is that we are getting a whole new audience coming along to the shows. We are looking forward to seeing everyone at our performances; we’ll both be out the front after the show, signing merchandise, so come up and say hi.”

John Waters performs Lennon: Through A Glass Onion at Her Majesty’s Theatre at various times on Fri 10 Jul and Sat 11 Jul.

Click HERE to put yourself in the running to WIN one of 3 Double Passes to see Lennon: Through A Glass Onion from 8pm on Fri 10 Jul.