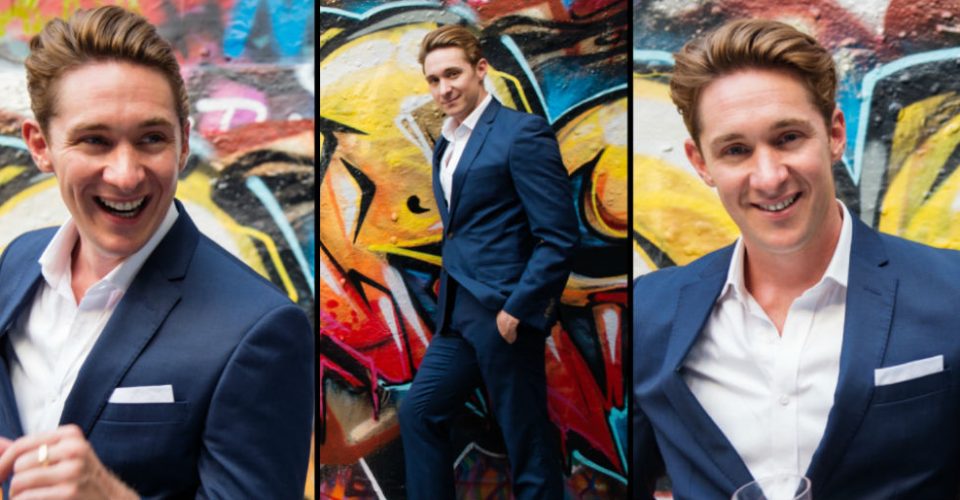 Kurt Phelan has been having the time of his musical life and is returning to Adelaide with his debut Cabaret Fringe show, Phelan Groovy, to tell everyone about it. No stranger to the musical theatre stage, not only has he performed many times at the Adelaide Fringe, but he recently starred in the Patrick Swayze role of Johnny Castle in the Australian production of Dirty Dancing… although many have suggested he was channelling his inner Danny Zuko more than Swayze.

We speak with Kurt and ask if he relates to this comparison.

“Not at all,” he begins. “I knew I would be compared to Swazye. But the truth is that I, as Swazye did, was playing the role of Johnny Castle and playing a role always comes with its own interpretations. I took the key elements of what that character was and took it from page to stage for people to enjoy.

“Something many people don’t realise about big shows is that the actor doesn’t always have much control of what they do. From costume to dance steps to direction, it must look like it has in every version all around the world. So, once they put the tough guy in a black leather jacket, tight jeans and dye his hair, of course there seems to be a little Zuko… But I always felt like Johnny.”

And how much fun was that show!

“It was so much fun!” Kurt enthuses. “Getting to dance those steps was amazing. The feeling of the crowd behind your every word and then that lift… I had the best year and a half of my life!”

What roles have you performed in other musical theatre productions?

“I’ve played Prince Charming for Disney, Gus in Saturday Night Fever, Mark in Rent (one of my favourites), Felecia in Priscilla, Mark in A Chorus Line, Baby Jon in West Side Story and next year, if all goes well, I will be plying Jamie in The Last 5 Years… now, that’s a scoop!”

Tell us about Phelan Groovy. Is this your first solo cabaret show and where did the concept for the show rise from?

“I’ve done a few solo cabarets before, but this is the first in years,” he says. “I love the intimacy of cabaret, and the crowd just being at arm’s length. This show is a cracker. It comes from many dinner parties and nights with friends who say ‘You need to put that on stage’ so here it is – a no-holds-barred journey inside my mind. I learnt at a very young age to only say about ten percent of what I think… This is that other ninety percent, but with songs.”

What songs will you be performing and how did you go about choosing them?

“Many of the songs have been changed – the lyrics, tempos and meaning – to make them work into the story I’m telling,” Kurt explains. “I have pitch for Prime Minister set to Lorde’s Royals, a Disney-bashing version of how every dad feels when he hears Frozen songs for the 10,000th time… Let It Go!!! And, of course, a swag of Phelan puns complete with sing-along.”

You certainly have a playful comedy edge to your performances. Will this play a big role in Phelan Groovy and what can audiences expect to experience from a night with Kurt Phelan – so to speak?

“Yes indeed,” he says. “The world is a very serious place. You only have to turn on the news to see that. I want my audiences to take a moment to enjoy themselves and let me do all the work. Put it this way… I liken my type of cabaret to if a stand-up comedian and a musical had a baby. Ta-dah!”

Where have you performed this show previously and what have been the audience reactions?

“I premiered it at Melbourne’s Butterfly Club and it went off,” Kurt says. “Nobody knew what to expect and they were all very presently surprised. I think they thought they were going to get a lot of Broadway songs and stories of growing up with little baby lambs… Nope! Not this show. Everyone was stunned, in a good way, and I was very happy. I’ve done this show in Mackay, North Queensland, and now I’m off to Perth before coming to Adelaide and then Canberra, Sydney and hopefully NYC (Shhhhh… that’s a secret).”

What is your favourite part of the show?

“I get to play ‘Australian Diva of the Stage’ Deborah Byrne… Well, kind of. And it’s a very ‘tantalising’ to say the least – for me and for the audience. Intrigued? Well, you’ll have to come along to find out.”

“This is a show everyone can enjoy,” Kurt says. “You don’t need to have seen me in a musical before or know anything about theatre. My brother, who is a sparky from North Queensland, came to see the show, and afterwards he told all his friends at work to come – and they loved it. That’s a true testament to the fact that it’s just a good old fashioned night in the theatre. I can’t wait.”

Book at TryBooking.com. Click HERE to purchase your tickets.

Click HERE for your chance to win one of two double passes to see Phelan Groovy on Sun 5 Jun.