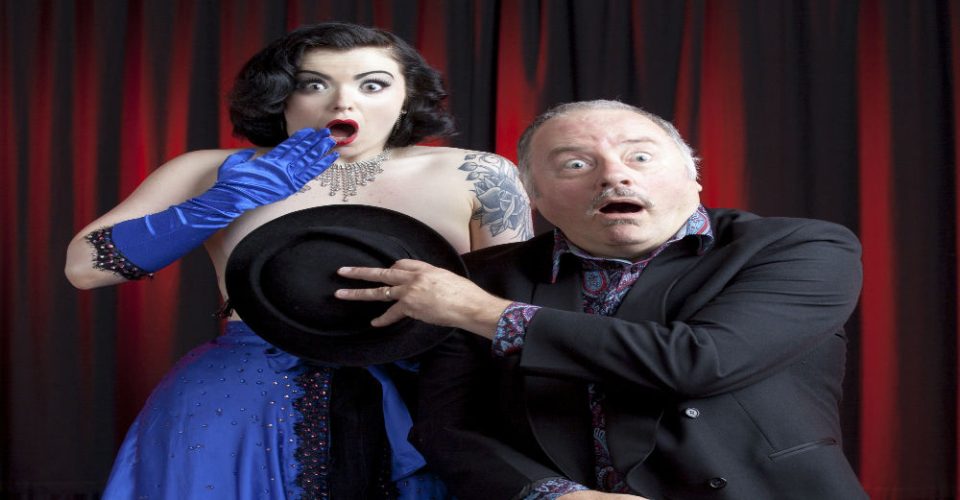 The brain-child of revered blues genius Doc White, the 1920’s and 30’s inspired performance will feature some of the country’s finest artists in a hokum blues, jazz and sexy burlesque infusion set to wow audiences. The Lowdown Hokum Orchestra and Burlesque Revue is an eight-piece act made up of Doc (vocals, guitar and mandolin), Nichaud Fitzgibbon (vocals), Peter Howell (bass), Tony Martin (drums) and Sophia MacRae (sax, clarinet and guitar) and Alex Black (violin and mandolin). It also features three of Australia’s most talented and sassiest burlesque dancers in Miss Bettie Bombshell, Mimi Le Noire and Minnie Monroe.

Described by Doc as ‘more than a gig but less than a musical’, the idea behind the show was born from the proposition that many of the best live songs are simply snapshots of human experience. “Like any good novel or short story, a good song should have a beginning a middle and an end and say something that resonates,” Doc says. “With that in mind, I wondered if it were possible to construct a musical experience which used different songs by different writers in an idiom with which I was familiar to illustrate a longer narrative. The songs carry the show and the dialogue provides the general direction the story takes.”

Nichaud and actor Mark Cutler’s characters are putting on a show about her life in show business in an effort to reinvigorate her career. Against Mark’s wishes, Nichaud hires her former musical partner and lover, Doc White, to play himself in the show. The tensions build. We meet them for the first time one week into rehearsal.

Doc says the creative process of pulling together such a sense intoxicating musical extravaganza was a new experience in itself. “Although I have been driving it, a show of this nature is a pretty collaborative effort,” he says. “It also uses an art form – burlesque – with which I am completely unfamiliar. I have never been to a burlesque show, and this one may be the first I attend. But I have always been interested in dance and the way dancers use their bodies to illustrate a story. Some of the most powerful theatrical experiences I have witnessed have been dance. In this show, the dancers got to choose the song they wanted to perform and come up with their own interpretation.”

Nichaud Fitzgibbon, who features as one of the key ‘characters’ in the Revue, says she is excited to be part of the unique show. “I love collaborating and the idea of this show is fresh,” she says. “I have always loved colour and movement… I come from a family of entertainers and I adore performing on stages, theatres and especially circus tents! I love the song choices and have brought some of my own suggestions, which seemed to come together perfectly. Doc and I sound great together and I can’t wait to get this show on the road. It’s going to be fun for blues, country and swing fans everywhere.”

The cast of musicians and performers featured in the Lowdown Hokum Orchestra and Burlesque Revue is the crème de la crème for the genre, a prerequisite that was critical for Doc. Simply put – “great songs deserve great players,” he says. “Everyone in the band has a musical pedigree to die for and it shows when we start playing. Because the music is the main medium through which the story is told, it needs musicians who understand the vocabulary of this particular style and can add their particular style to the song. The songs were chosen on the basis of lyrical content, style and how much fun they are to play and sing. I first floated the idea of this show about 18 months ago and it has taken a while to come to fruition but it has been worth the wait.

“The Wonderland Spiegeltent in Melbourne. It was great fun and we sold it out twice.”

“Hell, there are so many. Big Bill Broonzy. The impact he had on music was as monumental as The Beatles but he rarely gets mentioned in dispatches.”

“Bob Dylan, he walks his own path. The songs say it all.”

“I really love performing with Nichaud Fitzgibbon. She has an amazing voice and grew up in house where the type of music we do was the soundtrack to her life. A down and dirty duo with Nichaud would be something.”

“We do a cover of a song called My Favourite Record by The Asylum Street Spankers from Austin, Texas who were a fascinating mix of punk rockers, actors and jazz musicians until they disbanded in 2012. The song multiple parts and allows us to insert snippets from our favourite records. It’s challenging vocally and musically and it’s a real lot of fun to play.”

“Living in Mind of a Junkie by Anders Osbourne”

I got something between my legs make a dead man come

“Last Sunday’s Lowdown Hokum Orchestra and Burlesque Revue’s gig at Live From Channel 9 was a cracker. Worst gig – a festival in Goulburn, NSW in a tent in the middle of the day, it was 45C outside the tent and 60+C inside. I was delirious by the end and have no idea what I played.”

“Mandolin. I haven’t found anyone who hates it.”

“This is my life. I am a full-time performer.”

“I am mastering the art of hat juggling.”

“If anyone ever throws up on stage it’s always got carrots in it. Oh…what was the question again?”

“I had a job feeding the sharks in the viewing tank at Marineland in SA when I was a school. It was a lot of fun.”

“Holding my baby brother for the first time.”

“Frank Zappa. Met him at LAX. Super smart and took the time to explain how music works for him.”

“Forward a few thousand years to see how it all turns out. I am an optimist.”

“Can I get you another beer?”

“Best – work with the best people you can.”

“Best – everyone can sing. Take the time to find your voice and if you need help to mount the search, go do it. Singing is astoundingly good for you.”

“I might go back and do medicine. Then again, maybe not.”

“My friends bet me that I wouldn’t be able to start a conversation with the most beautiful girl in the bar. Wanna buy some drinks with their money?”

“Vanilla choc chip. They are the only 2 flavours you need.”