UK’s a Cappella Sensations The Magnets Are Coming Back To The Garden And Bringing Their Amazing Vocal Talents With Them! – Fringe Interview 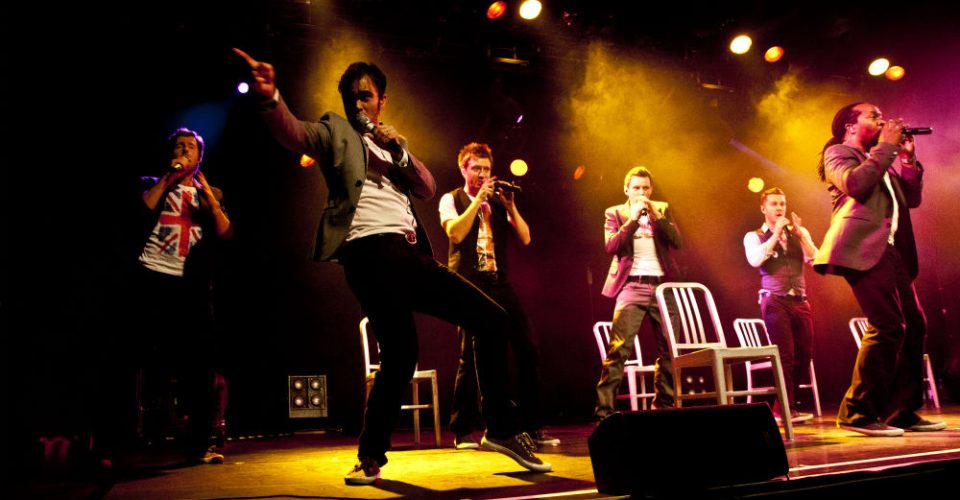 The Magnets are bringing their euphonic sounds back to The Garden Of Unearthly Delights for a fourth consecutive season. The a Cappella sextet’s sell-out shows in Europe, Asia, America and Australia are all a far cry from their humble beginnings as street performers 20 years ago.

We speak with Michael Welton via Skype from his UK home. Michael reunited with The Magnets following some time out to spend with his young family. During the 2014 Adelaide Fringe tour Billy Boothroyd admirably filled the breach but now Michael’s back and he’s delighted to be soaking up another Aussie summer in The Garden. He tells us this will be the group’s first year touring without resident sound technician John Robert Milner and the first time that they will come to Adelaide as a fully independent touring act.

We begin by asking Michael about the extensive travelling that The Magnets have been doing over the past 12 months.

“After Australia, we headed to Barbados, which was a lot of fun.”

I bet that was a hard gig!

“Yeah, really tough,” he laughs, “but a very nice first gig back in after having missed Australia. We then did the summer festivals circuit and the Edinburgh Fringe, which is where we developed this new show. But the highlight of the year was our first tour of China.”

How did that go?

“It was a real eye-opener,” Michael says. “The cities over there are so huge. In an area the size of the UK there were five or six cities, each the size of London or bigger. But the people were really receptive, which was great because we had no idea what the audiences were going to be like. They were very much like a European audience in their appreciation of the show… up until the last couple of songs where they all piled up down the front and there was much slapping of hands. All of a sudden we were feeling like rock stars [laughs].” 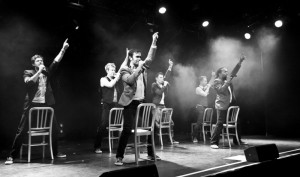 Were there any language issue?

“Yes, definitely. Lots of people don’t speak English, our Chinese is rudimentary and sometimes we would find ourselves in the situation where we could not make ourselves understood. That was particularly the case with some of the tech team which made it a bit hairy trying to get the shows up and running. But between John and Connor – our lighting guy – they managed to get things running.

“We’re going back to China in April after spending a month or so at home. There’s a healthy a Cappella culture over there so the crowds were really great each night.”

Even though The Magnets are an a Cappella group, their sound is so full with two tenors – Nic Doodson and musical arranger Steve Trowell, two baritones – Callum McIntosh and Michael Welton, rhythm bass – Fraser Collins and the vocal percussion talents of beat boxing virtuoso Andy Frost, listeners could be forgiven for thinking that there were some instruments playing out of sight. We ask Michael if he feelstheir sound occasionally surpasses traditional a Cappella?

“Sometimes in the show we have to break it down to remind people that our music is made by our voices only,” he explains. “That’s why we’ll do a number with just three of us or we’ll start a song with a single vocal and build it up. Very often, when doing a short gig, there will be people at the end who will tell us that they spent half the gig thinking there was a backing track playing and that it was only at the last song that they realised that there wasn’t.”

Having performed, in one line-up or another, for 20 years, how much practice goes into a Magnets gig? Is it a matter of knowing your own vocal range and therefore always being aware of where your melodies are going next?

“Each year we produce a new show for the Edinburgh Fringe in August,” Michael says. “There’s a lot of rehearsal that comes with that, which usually begins in May. We decide on our songs, the arrangements get sorted – mainly by Steve, and by July we get together for a couple of weeks of solid vocal rehearsal. That’s also when we are whipped into shape – literally – by Fraser, who is also our choreographer, to get the dance moves down. Once it has all come together, that’s the show we tour for the next 12 months.” 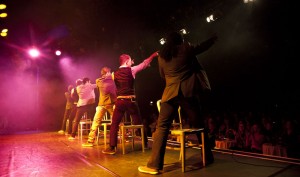 What have you called this show?

“It actually hasn’t got a title, besides The Magnets. Basically, this is less of a theatrical show and much more of a straight music performance. Obviously there is still the choreography and theatricality, but we’re doing more of an up-to-the-minute modern set list.”

So what are some of the songs that Adelaide audiences are going to be treated to?

The Magnets have been recording their fifth studio album, called Counting Stars, with the intention for it being ready in time for their Garden season. Social media suggestions and a crowdfunding project has not only helped to produce the album, but also to decide what songs would the band would put on the CD.

“We’ve been recording this album in Fraser’s home studio,” Michael says. “It’s the first time that a member of the band has produced a full album for The Magnets, so it’s been an interesting experience. Most of us haven’t heard the finished tracks yet; we just went in and recorded our parts, so this album is going to be very much The Magnets as Fraser hears them.”

Although Steve Trowell is the main musical arranger, do you all get an input in to your harmony lines or even the songs that you each sing?

“Since James [Fortune] lost his voice, Steve has been doing most of the musical arrangements, so he gets the largest input into the music,” he explains. “But we all make contributions. Fraser, in particular, tends to improvise around the part with his bass lines. It’s more difficult to change things with the backing parts because that’s where we build up the chords so we really have to do the same thing every night. Even the lead vocals can change around a bit.

“It’s quite a static musical form in that you can’t change very much once the vocals are decided upon. Fortunately, because the show is so evolved in terms of choreography, movement and audience interaction, that’s where a lot of the fun comes from every night.

“All of the songs that we are doing this year were pretty big hits in the UK,” Michael says, “so it will be interesting to see if people will recognise them in Adelaide. It’s funny to think that we could be doing a set of up-to-date hits if they weren’t actually hits in Australia. But if people don’t know them, then they are originals [laughs].” 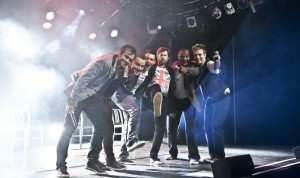 Will there be any of your originals done in this show?

“No, which is a bit of a shame,” he replies. “Because we are so busy on the road, there isn’t much time to be creative and write our own stuff. Producing a new show each year, it’s much quicker to do other people’s great songs than to come up with some of our own. We have deliberately set out to so a set list that will appeal to a wider audience – or, at least, a younger crowd. Which is certainly what happening in Edinburgh; as the word-of-mouth spread, we had more people in their twenties than what we’ve had previously.”

This is your fifth time to Adelaide, your fourth to The Garden. What is it about Adelaide that keeps you coming back?

“Honestly, it’s really about how friendly everyone is. Leaving London and then suddenly being in Adelaide where people actually talk to you and smile and are generally really happy, it’s quite a shock and takes a few days to get used to having eye contact with people,” Michael chuckles. “And, when we are handing flyers out, we can genuinely persuade people to come to our show; they chat to us and we tell them what we do, and the next minute you’ll see them sitting in the audience. That and the feedback afterwards, are really satisfying. That’s just one of the things that make it a really lovely festival.”

And, of course, the warm weather.

“Absolutely! And just being outdoors really,” Michael concludes. “It’s winter here in the UK and everyone is inside trying to keep warm.”

The Magnets perform at The Garden Of Unearthly Delights’ Vagabond from 7pm on Fri Feb 13 until Sun Mar 15.

Click HERE to put yourself in the running to win one of 10 Double Passes to see The Magnets on Sat Feb 14.