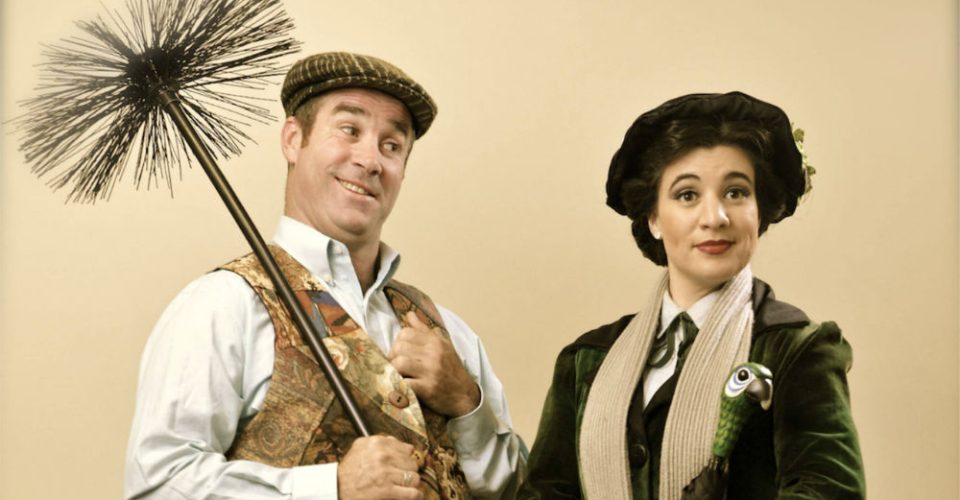 Mary Poppins is the Oscar-winning Walt Disney classic musical based in London 1910 about a magical nanny who arrives to fix a dysfunctional family. Written by Australian author P. L Travers, Mary Poppins the movie was release in 1964 and starred Julie Andrews and Dick van Dyke, before producer Cameron MackIntosh negotiated with the creator P. L. Travers for the stage rights and the musical version began its journey on the West End in 2004, and then opened on Broadway in 2007.

Adelaide Producer/Director Matt Byrnes is please to be presenting Mary Poppins throughout July at the Arts and Elizabeth’s Shedley Theatres. We speak with Byrnes, via email, and ask what drew him to Mary Poppins?

“I saw the movie when it first came out in the ‘60s and have loved it ever since. It was also incredibly disappointing when the professional version never made it to Adelaide, so I was determined to get the rights and give Adelaide a Poppins it could enjoy and be proud of.”

The shoes of Julie Andrews and Dick van Dyke are big ones to fill. Who do you have in the roles of Mary and Bert and what qualities were you looking for from those auditioning?

“Lauren Potter who is playing Mary, is a South African-born singer performer who has performed in musicals in Adelaide. She has been a lifelong fan of Mary Poppins, there is a sense of destiny about her and she was born to play the role. Lauren is the complete package we were looking for, she has a beautiful voice, a natural acting style and she understands the importance of Mary.

“Brendan Cooney is a terrific character actor well known to Adelaide audiences having performed in many MBM shows playing Wilbur Turnblad in Hairspray, and he is ideal for the role of Bert. He is a great mover, a very adaptable actor as Bert changes occupations quite often during the show. There’s a tremendous likeability about Brendan which is required to play the role of Bert.”

Tell us about the other main cast members. Were you looking for similarities to those from the original movie?

“James McCluskey-Garcia makes a very appropriate Mr. George Banks as he has the stuffy style and bombast needed for the part and the heart of gold waiting to be recovered. Ellyone Keniry provides great strength and emotional depth as his wife Winifred Banks. Shalani Wood and Sebastien Skubala are two wonderful young talents as their children Jane and Michael Banks.”

The soundtrack to Mary Poppins is a classic one, with many memorable songs. Do these also stay true to the originals – which would be great for audiences wanting to sing along – and will there be a live band?

“We have an amazing orchestra led by our Musical Director Gordie Combes to play iconic songs like Spoonful Of Sugar, Chim Chim Cher-ee, Let’s Go Fly A Kite, Jolly Holiday, Feed The Birds and Supercalifragilisticexpialidocious.”

How have you dealt with the parts where Mary Poppins flies in and out? And what of the cast dancing on the rooftops in Chim Chim Cher-eree? Will there be real pigeons for Feed The Birds?

“Mary will fly into the hearts of everyone who sees the show, a bunch of brilliant chimney sweeps will set the London rooftops alight with the huge Step In Time tap number, and there’ll be pigeons aplenty pecking up the crumbs from our beautiful Bird Lady, Chris Bussey.”

Who is your costume designer and how close have they remained to the 1910 time period?

“Sue Winston and Anne Williams have done a wonderful job creating, begging and borrowing the lavish costumes, all in the Edwardian style of 1910 London. We have had great support from a number of Adelaide companies, including Marie Clark, The Rep, Tea Tree Players and Northern Light.”

So, how similar to the movie is the stage production?

“The stage production is a different version of the story, with extra songs and characters. But all the elements that made Mary Poppins such a wonderful story are all there.”

What’s your favourite part of the show? Will you be making a cameo, as you are known to do in many of your productions?

“My favourite part is Step In Time when the chimney sweeps take over the rooftops, Let’s Go Fly A Kite is also very uplifting, and Mary’s farewell is also very touching. There is a disreputable German conman called Von Hussler in the first bank scene, who may possibly bear a striking resemblance to me.”

“Mary Poppins is a show for every age, so bring your children, bring your partner or just bring yourself; it is a show that is practically perfect in every way. There’s room for your family to come and enjoy it. We hope the five-week season means no-one will miss out.”