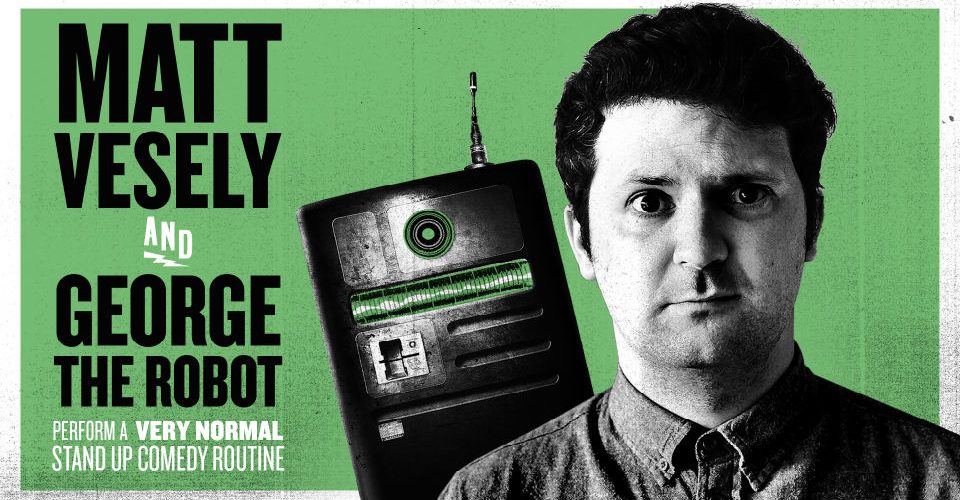 Matt Vesely has the comedic credentials to easily pull off a very normal stand-up comedy routine, but this year he has forgone the privilege in order to help his friend George with his aspirations to do his own show. The catch is, George is a robot, and robots don’t have a glorious reputation for being funny.

Nevertheless, Matt introduces us to George. And surprisingly it is evident that George has been programmed with a certain endearing personality, and the audience is on his side from the outset.

Matt begins to fear the show could go horribly wrong when he learns that despite wanting to do his own show, George has only written one joke! Mildly amusing as it might be, as robot jokes go, it is hardly sufficient to carry an hour show. Matt encourages George to come up with more material, giving him a lesson on how to write comedy, which gives Matt an opportunity to regain control of the laughs. He also worries, however, that George is too nice and not edgy enough to be a comedian. For starters, he is programmed not to allow profanity, apparently an essential ingredient for stand-up comedy. George fixes the problem by altering some of his program settings, with hilarious results.

Matt Vesely and George The Robot do not really perform a very normal stand-up comedy routine at all, in the sense of that being a string of hopefully hilarious one-liners. Rather this is situational humour, with the comedy deriving from the sheer daftness of its premise. It works because George is charming and we want him to succeed. The line between which is the smarter – man or machine – also gets a little blurred at times. This is an intelligent and uplifting show well worth making the effort to see.