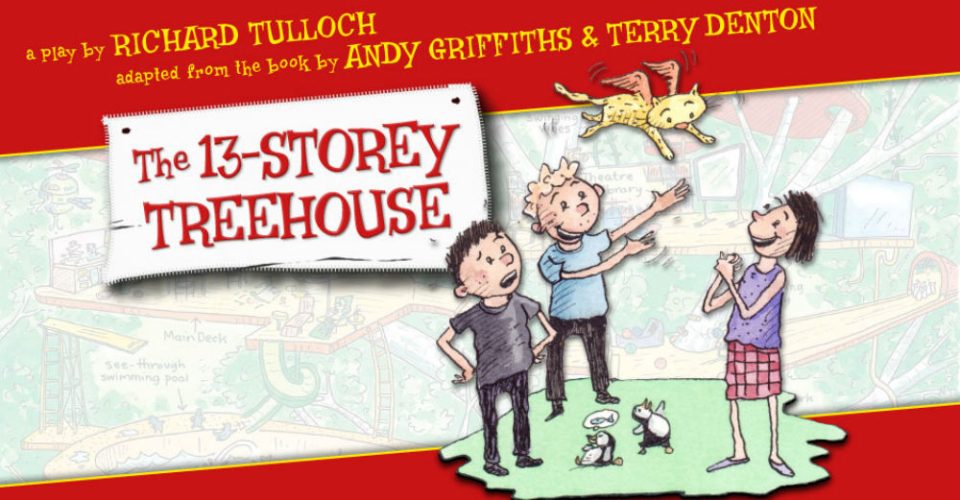 Seriously, who wouldn’t want to live in a treehouse all of their own? Think of the fun you could have with 13 floors of everything you could possibly want: a bowling alley, secret underground laboratory, self-making beds and a machine which shoots marshmallows into your mouth whenever you’re hungry. Seven or seventy, age makes no difference to the inner child and the fun you can have with your imagination.

13-Storey Treehouse is based on the bestselling children’s book by Andy Griffiths and Terry Denton, written and adapted for stage by Richard Tulloch (The Book of Everything, Bananas In Pyjamas). It’s presented by CDP Productions.

The Clothesline speaks with the jovial Matthew Lilley (whose acting credits include Home & Away, Happy Feet) who’s in Brisbane as part of the show’s four-month national tour.

“For the very few people in Australia who hasn’t read the book,” he begins. “13-Storey Treehouse is one of Andy Griffith and illustrator Terry Denton’s biggest sellers in the whole series of books. One of their best known is The Day My Bum Went Psycho, but then Zombie Bums From Uranus is also very popular.”

Because kids love a good poo-bum-snot-story, don’t they!

“Yes, they do!” Lilley laughs. “The good thing about Andy is that he really knows what kids find hilarious. Sometimes, I think grown-ups forget what’s funny, and may even consider some of this stuff a little borderline. But if someone gets squashed in one of his books, kids know that’s not real but it is funny because they understand it wouldn’t really happen. So he really does get into the minds of the kids with all the gross stuff that they love.”

What made Griffiths and Denton write a book based on themselves?

“When this series of books came along, they were trying to decide what to make them about and so began writing about themselves in a hyper-realistic way,” he replies. “At the time Andy was living in a multi-level townhouse – which they called The Treehouse. Then they began think up scenarios of different room filled with crazy things – and it all developed from there.

“In the book, Andy and Terry have a publicist called Mr Bignose who is expecting their book to arrive on his desk that day. But they have spent all their time playing in their tree-house, with a whole bunch of crazy things that happen, and have totally forgotten their 5 o’clock deadline. So, they decide to write about their day and get it done just in time and they avoid getting into trouble.”

Then Richard Tulloch translated it into a play.

“If you’ve read the book, you’ll understand what an amazing feat that was to do,” Lilley says. “It would seem almost impossible with all the mad things that go on. What Richard did was to make the show based around the idea that Andy and Terry decided to turn their book into a play and have come to the theatre to rehearse. But, they get the dates wrong and realise that the show is due to open that day! The audience is there, they’ve done no rehearsals, they don’t even know what they are going to do… so they have to make it up as they go along.

“The guys are caught off-guard when show suddenly starts and they are caught like rabbits in the headlights,” he says. “Andy starts blaming Terry for not making the props and ruining the show, so he tries to make them as he goes – which are all quite rubbish, but the kids love them – like trying to make a treehouse out of a twig. There’s a big prop box full of costumes that turns into a shadow puppet screen, as well as a machine that turns 2D pictures into 3D objects. It all grows from there.

“The same mayhem in the book happens on stage,” Lilley adds. “They get into trouble a lot. Andy orders some Sea Monkeys, but the company get the order wrong and they deliver a mermaid instead – who Terry marries – but she then turns into a Sea Monster and tries to eat them so they have to escape from her. But the whole premise is that they have no props so they have to get the kids in the audience to use their imaginations as well, so it’s quite fun. Things do get a bit out of hand and everything starts happening for real! Without giving too much away, there are a lot of surprises that shock everyone and the kids go crazy! They love it!”

How have parents related to the show?

“Richard Tulloch, and Andy Griffith, is very clever in that they have added some jokes just for the adults that will go completely over the kids’ heads,” he says. “But there are also plenty of jokes specifically for the kids so everyone gets to enjoy themselves!”

Lilley plays illustrator Denton in the show. Joining him on stage with a little bit of singing and a touch of dancing and a whole lot of fun is Andrew Johnston as Griffiths and Eliza Logan who plays multiple roles including Mr Bignose, the Sea Monster and Andy’s real-life wife and editor.

Having mentioned that they get the kids involved in the show, we ask if that makes each performance different from the one before.

“The guidelines of the show remain the same, but every show is unique in the way it free-flows and is improvised,” Lilley says. “We’ve done more than 80 shows so far and not one has been the same as another. It certainly keeps it interesting for us as actors, to find new things to do with your character as well as adjusting to new theatres and different stage settings. It’s always evolving.

“One of the things I love about this show is that it is beautifully inventive and creative and almost shows kids how they themselves can write stories and how limitless the imagination is,” he adds. “The characters are suddenly in this really ridiculous situation and they find ways beyond their limitations to get themselves out of it.

“Griffiths and Denton’s books are aimed at age 6-12 years,” Lilley concludes. “They’re crazy and fun but not in the way that parents would frown upon them and stop their kids from reading them. And why would they really?”