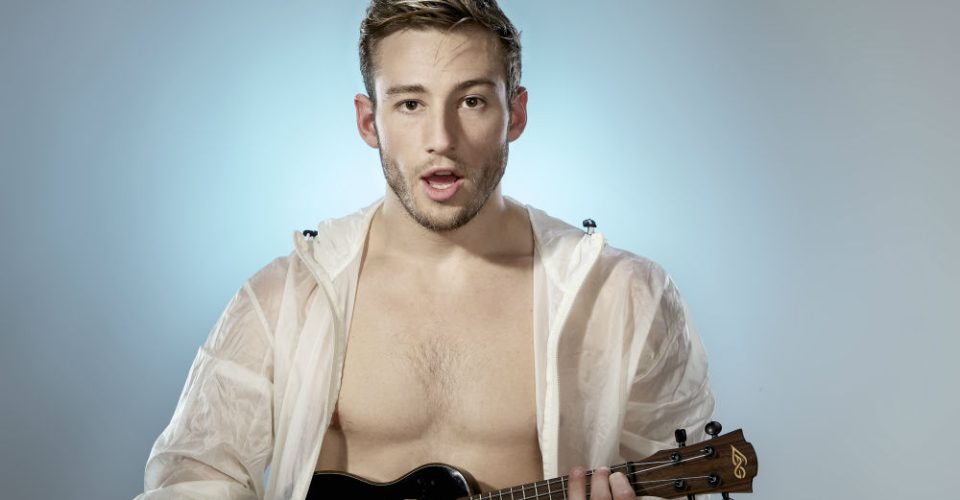 Matthew Mitcham is best known as an Olympic and Commonwealth Gold Medallist Diver, but this year his performances have been on the stage as well as the diving platform. He published his autobiography Twists And Turns in 2012, which provides the basis for the cabaret show coming to the Adelaide Feast Festival.

We speak with Matthew over the phone about his plunge onto the cabaret stage, being the 2014 Feast Festival Ambassador and his thoughts on Bob Downe moving to a diving career.

“I think I’ve always been a bit of a performer,” he begins. “I was a trampolinist when I first discovered diving. The general public was allowed to use the diving boards at swimming pools so, like the show pony that I am, I was always on the boards showing off doing double flips. One day a National diving coach happened to be walking past and saw me doing a double flip and that’s how it all began.”

Are there many similarities between diving and performing?

“I think that diving itself is more of an artistic sport and I’ve always thrived on competition,” Matthew says. “The bigger the stage, the bigger the event and the better I perform because I get a real kick out of that adrenalin. I really think that I was born to perform. It’s what I love doing.”

Tell us about bringing Twists And Turns to the stage.

“Obviously, because it’s autobiographical, it starts at the beginning and finishes not that long after the London Olympic Games in 2012. The book has pretty much everything that happened in my entire life in it.”

You’re quite open in your book. Will audiences be treated to that same honesty on stage?

“Totally! Cabaret is a medium that really lends itself to that intimacy. I think it’s an even better medium to show that vulnerability,” he replies. “Just like any good show it has got light, bubbly, fun, happy-go-lucky moments in it. Something I often get at the end of the show from people is that they laughed and cried.

“I think what sets it apart from a lot of shows is how personal it really is,” Matthew continues. “A lot of people do shows about other people or things that aren’t really personal. But mine, because it’s my story, it is so candid, open and raw. I think its story so many people can relate to, be it periods of depression, anxiety or hardship. It could be with a relationship or with work. People can really relate to the experience because they’re just such prevalent issues, but they just don’t talk about it that much.”

Your script writer, Spanky, is also coming to feast. How much influence did he have on your stage show?

“Spanky’s show is probably the best I’ve ever seen in my entire life; all about this totally fantastical, fictional story,” he enthuses. “Spanky is just such a wonderful storyteller and so having already had a story with the book, it was just a matter of choosing which bits would translate best to stage. Spanky worked on it first and then we just kept evolving it from there. The good changes have stuck and the things that haven’t worked as well we’ve changed to make it the most efficient and impactful show it can be.”

You’re often seen on magazines and television in your Speedos. If it’s not too inappropriate to ask, will you be wearing them in your show?

“Definitely! I won’t be wearing them for the entire show, but I cover ‘The Dive’ from Beijing in them. So it’s not an inappropriate question at all! It is cabaret, but it’s not burlesque. I won’t be doing the helicopter [laughs]!”

Matthew began playing the ukulele only 4 years ago when he was injured and unable to dive. He taught himself how to play by watching videos on YouTube and since then he has completely absorbed himself into music.

“Music is just so wonderfully therapeutic and something that you can have with you for your whole life,” he says. “I just get so much profound joy out of sitting in the car singing along to the songs on the radio. I now have another way to tell my story using music as a vehicle. It is so rewarding for me and the best bonus when other people enjoy it.”

What does the title and role of Feast Festival Ambassador mean to you?

“Well, it was great to even be asked to perform at Feast, because it has a really great reputation throughout the country as being a really high calibre, good quality and respectable cultural festival,” Matthew enthuses. “And then when Feast Artistic Director Catherine Fitzgerald actually asked me to be the ambassador it was like ‘Hell Yeah!’”

Are there others from the Australian dive team who we can expect to see on stage performing with you in the future?

“Not musically, that I know of, but there are certainly some big personalities in diving!”

How about Adelaide diver Rachel Bugg?

“I was going to say Rachel Bugg,” Matthew says. “She is absolutely amazing. We’re really close – like two peas in a pod – and is just the funniest girl that I’ve ever met. I would have a fear of inviting her on stage though, because obviously I want to be the star of my own show [chuckles]. She has got such a great personality, so I’d hate to have to compete for the limelight!”

Bob Downe says that you were stealing too much promotional space from him for the Feast Festival and so he’s considering moving to diving. What do you think of that?

“That would be hilarious! Actually, I would love to collaborate with Bob and do a show together in the future.”

“Make sure to get tickets and get all of your friends buy tickets!” he concludes. “We need to support the Arts more and I can absolutely promise that it’s going to be an epic show!”