Melinda Schneider: DORIS, Doris Day So Much More Than The Girl Next Door 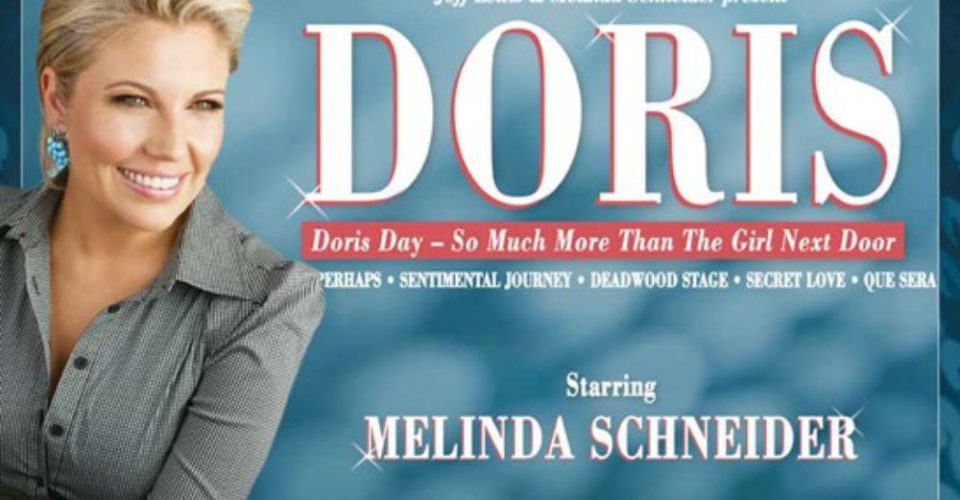 The multi-talented Melinda Schneider has brought her successful show DORIS, Doris Day So Much More Than The Girl Next Door back to the stage. Since she first toured the show in 2011, Schneider has become a mum and released an album, and now back to celebrate Doris Day’s 90th birthday. The Clothesline speaks with Schneider via email and she begins by telling us why Doris Day is just as relevant today as when she first fell in love with her at the age of eight after watching her sing in the film Calamity Jane.

“Doris, what a woman – she’s a beautiful, strong, talented, resilient survivor!” Schneider says. “She’s survived her car being hit by a train, three divorces, domestic violence, bankruptcy, Charles Manson, she’s outlived all of her husbands, has just turned 90 years old and has done it all with her head held high. I admire her. She’s very strong, as most women are.”

Which of Doris’s more than 600 songs will you be singing, and do you have any favourites?

“When I began writing the script with David Mitchell, we really started with a basic song list and ended up with 26 songs for the show,” Schenider says. “We chose the biggest hits from the movies and then threw in a few of my personal favourites.

What can Adelaide audiences expect from your show? Will you be telling stories of Doris’ life or just performing her songs in concert form?

“Doris’ life will be shared through the songs and dialogue,” she replies. “It’s not an impersonation. I’m playing myself as the narrator, but I occasionally channel Doris – or so people tell me. She’s had a fascinating life, as well as all of her success, four tumultuous marriages and her son Terry even had a brush with Charles Manson. We uncover quite a few little-known facts in this show.”

How has the tour has been going so far?

“It’s been a whirlwind tour!” Schneider says. “People have been jumping out of their skins with happiness after the shows; their positive comments have been so wonderful. It feels amazing to be able to move people so strongly and make them laugh and cry.”

You appeared on Dancing With The Stars in 2010. How was the experience and have you been able to incorporate anything you learned in to your concerts?

“I absolutely loved being on Dancing With The Stars!” she enthuses. “Probably the toughest thing I’ve ever done physically. Those ballroom dancers are athletes! The dance training definitely came in handy for this show, I have two strapping guys in James Bryers and Jordan Pollard to dance with on stage. Lucky me!”

How do you make being a mum and touring work best for you and your family?

“Yes… welcome to the world of working mothers! It’s very tough. Sullivan is nearly two and has been on the road with me since the end of April,” Schneider explains. “He loves hotels and planes; it’s all very exciting for him, but hard work for me looking after a toddler all day, then doing a two hour show every night. On top of that, I’m still breast feeding, so I don’t get much sleep at night. It’s madness, but still, being a mum is the best thing I’ve ever done in my whole life.”

Was it hard to return to touring after 18 months off?

“It was hard,” she agrees. “I had to get match fit again, both vocally and physically, so I trained for weeks leading up to my 8 shows a week season at the Opera House in Sydney. I’m probably the fittest I’ve ever been and running around after a 22-month-old helps too.”

Head over to our COMPETITION PAGE to go in to the running to win one of two Double Passes to see Melinda Schneider in concert: