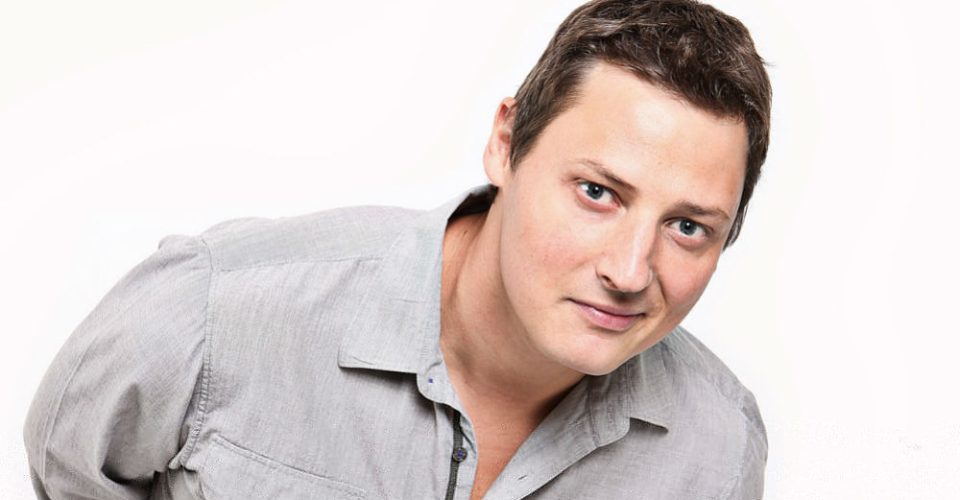 It was part of the double-act Triple-J Drive show with then comedic partner Tim Ross that Merrick Watts became known to Australian audiences. From there he moved on to Sydney Breakfast radio before becoming a comedy stalwart on television and being nominated for and winning many broadcasting and comedy awards as well as the 2003 GQ Man Of The Year Award – Comedians Of The Year – Merrick & Rosso.

Merrick is coming to town for a week of fun and laughter as part the AdelaideComedy.com weekly comedy circuit, so we emailed him so silly questions just to see what he had to say for himself. We began by asking him how life was in his world.

“Pretty good, about to head to Adelaide for the summer break with the family so all I need is good weather and I’d be the happiest bloke in the world.”

You are headlining 3 nights of comedy for AdelaideComedy.com before hosting the final night of the week. Do you have a theme to your own show or are you just going to fly on the spur of the moment?

“Ummm… probably a bit of both I’d say. I have material that I’ve been working on this year but will also try some new stuff. I’m also planning to use the opportunity to do some audience participation stuff which is often my favourite thing to do because it’s always unique.”

Which up-and-coming Adelaide comedian/s do you see really going places?

“Jay Weatherill. But seriously, I met the Premier a couple of weeks ago and he is a terrific bloke. I’m going to use this opportunity to invite him to come along to the show for free… but no plus one, unless he brings Leon Bignell.”

Besides you and comedy, what is the common denominator is a Merrick Watts gig?

“I always wear black. Black jeans, black t-shirt. It’s a throw back to when I started out in the ‘90s and I’ve just started doing it again. Two reasons: 1. It doesn’t distract from the performance and 2. It makes we look mysterious i.e. mysteriously less fat.”

Comedian, TV, radio, author. Are there some hidden talents that we don’t know about that you would like to share?

“You forgot actor, but that’s debatable as a talent that I have. I also ride motorbikes and can turn my eye lids inside out. Apart from that, nothing at all.”

Has having children re-shaped your comedy style, or just added a whole new fabulous dimension?

“They offer material but I think comedians sometimes shy away from doing too much material about their kids because people who don’t have kids can’t relate as well. Everyone relates to doing a pop-off in a lift.”

Is there a comedian that you would most like to be?

Is there a comedian who would most like to be you?

What’s the worse joke your dad or uncle ever told? Do you ever re-tell it, but better?

“My dad didn’t tell jokes as much as great stories that were embellished with great humour. I always thought, as a kid, my dad was a funny guy until I got older and realised he was just a heavy drinker. There will probably be some jokes about Dad in this show.”

What job/s do you currently perform in your alternative life when not performing comedy?

“Jobs? Are you kidding? I got into comedy so I would never have to have a job!”

Tell us something that people don’t already know about you?

Who is the most famous person you ever hit on? Did it work?

What is your pet hate?

“In Adelaide, my pet hate is the inability of people to merge in traffic. Point in case; at the back of the airport on the turn off to go down to Glenelg there is a merge lane. So just #%@%ing merge! What are you waiting for… An invite? Accelerate and then enter the lane! You don’t need to stop! My god, this is the only thing holding Adelaide back from hosting the Olympics!”

What would you like people to know about you or your show?

“There are no jokes about merging in traffic.”

Will you be back for Adelaide Fringe?

“I am trying to get back. I missed this year but loved last year, so maybe it’s time.”

“Rocky Road, coz I’m largely pretty soft but, every now and again, a bit nuts.”

Anything else to add?

“Come to Rhino Room and if there is a small line to get in, just %$#@ing merge!

Merrick Watts performs at The Marion Hotel on Wed Dec 10, Tea Tree Gully Hotel on The Dec 11 and Rhino Room on Fri Dec 12 until Sat Dec 13.

For bookings and further info, head to AdelaideComedy.com. Click here to purchase your tickets.