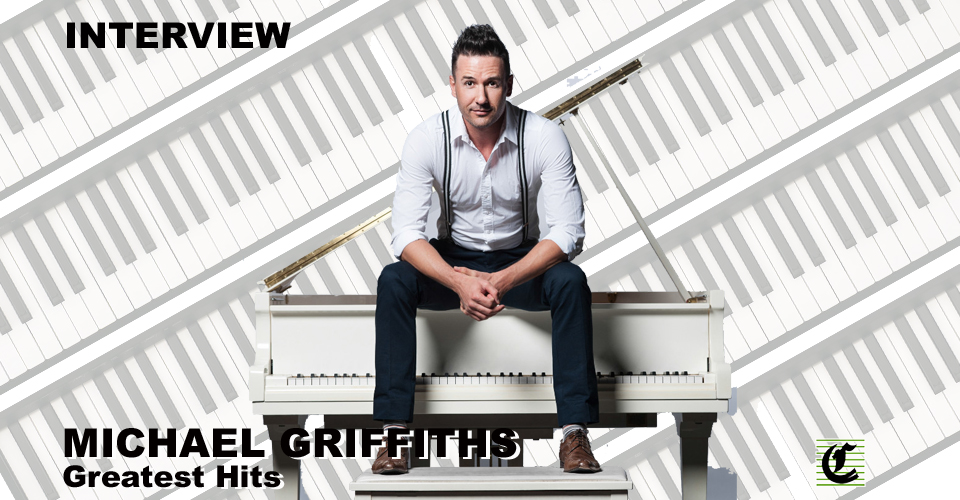 We speak with Michael about his show Greatest Hits and ask if this is a collection of songs from previous shows or just the songs that he loves the most?

“It’s mainly a retrospective. It is ten years in Cabaret this year,” he says, “and I’ve never done a retrospective, so this is a nod to my favourite songs from all of my shows, with  a few of my favourite songs added in, so ‘Greatest Hits’ is sort of an umbrella term. It’s also a nostalgic reference to the ‘80s when I grew up, and to when artists would release songs on cassettes and LPs; I was always very excited about the greatest hits compilations. So it’s sort of all of those things and lots of my faves from the ‘80s.”

From your beginnings in Musical Theatre 21 years ago, you seem to have found your spiritual home in Cabaret. How did the move from one to the other occur?

“It’s just about diversifying,” Michael says. “I was living in Sydney all through the Noughties, but came home to see my Mum in June for  her birthday – which always coincides with the Adelaide Cabaret Festival and, after going a couple of times, I just fell in love with it. I thought ‘I want to do that; it looks way more fun and way more thrilling, and much harder!’

“In Musical Theatre you’re surrounded by sets and costumes and a cast, but Cabaret is very exposing – so I really felt drawn to it. I didn’t really think I’d make it a fully-fledged thing, but that’s the path I’ve ended up going down, and I’ve never looked back.”

One of the things that people love about Cabaret, especially from my own perspective, is the diversity of it, but also the stories that go with it, and not just the stories of the people, but often people are performing songs from artists that mean the most to them or that have affected them.

“Yes. Certainly tribute shows is kind of where I started, but the more I’ve been doing Cabaret and the more I’m confident, the less I’m interested in hiding behind masks and other people. Now it’s just about me being on stage as myself.  Greatest Hits is less about being a tribute show and more about ‘Oh! I don’t have to hide, I can just be me!’ and that’s just as much fun. It’s more fun even! And no script anymore!

Michael explains that he used to script everything, but it was partly from working with Carlotta for so long that he learned that he no longer needed one.

“It’s far more thrilling to just go out and be present,” he says. “There’s an art to it… which I stole from Carlotta. It would be terrible if she came to see me perform because she’d see all of her tricks that I’ve stolen [laughs].”

So, what are you going to have in the show, song-wise?

“Oh literally a taste of every one of my solo shows, so that covers Madonna, Annie Lennox, Kylie Minogue, and Cole Porter, Peter Allen, and then songs that I have just fallen in love with, songs that take me back to the ‘80s. I grew up in the ‘80s, so that will always be my go to, as anyone my age will attest. But I’m in my late 40s now, so it’s all about nostalgia.

“Because of trials of last year, I felt it really important to be fun and festive, upbeat and feelgood. We go to be entertained and uplifted, and it goes without saying that we’ve all had a testing year, so I think it’s important for our entertainment to be – not silly, but just to remind us about the good stuff. So this show is all about feel-good, up-tempo and fun.”

Silly is good though, that sense of light-heartedness. You know, like when you watch children get excited about nothing. That kind of excitement is really awesome and it’s something that adults could embrace more – carefree and happy. Cabaret doesn’t have to be all down at out, does it?

“No!” he agrees. “It can often be cathartic – it can be lots of things – but that’s also the power of music and the power of nostalgia that helps us remember that unaffected ten-year-old that wasn’t cynical and wasn’t jaded and just got excited about a song. I was that kind of ten-year-old and these are the songs! Life was simpler – but then things get more complicated as you get older.

Greatest Hits is going to be a fun show. I don’t think there’s even one ballad in there.”

“Well maybe there’s one,” Michael chuckles. “If you want ballads go to see someone else. But if you want a good time come and hang with me! I’m looking at the Violent Femmes with one, that’s a better sense of departure for me, but when I was about 14-15 I just loved their first album, so yeah, again it’s a night of taking us all back to the ‘80s!”

Please tell me you have at least one Abba song in there.

“I do actually, so you won’t be disappointed. But ABBA and Peter Allen are my ’70s exceptions in the show.”

After Fringe is there much else happening for you? We know that Covid has put a kybosh on a whole lot of things.

“Yes I’m currently working on the development of a cabaret with Stephen Oliver from ABC’s Black Comedy. He and I have worked together in the past,” Michael says, “and we’re mounting a show at La Boite Theatre in Brisbane We have already started with development but I’m literally nicking back to Adelaide for the weekend at Fringe, and then I’m up here in Brisbane to work on Bigger And Blacker before presenting it at La Boite, which is fabulous.

“I’m also Artistic Director of the Perth Cabaret Festival, so we’ve already started working through to our first festival in June; I’ll be both working and performing. This year everything’s happening after last year’s total write-off. Suddenly life is firing on all cylinders. I’m just praying that borders stay open and things stay on the straight and narrow.”

Is there anything else you would like to say about your show, about Fringe, about how awesome you are – anything like that?

“Only that I’ve been doing Fringe every year since 2014, although last year I missed out because I was touring in America. So after a year off, I’ve come back to my favourite city and my favourite festival… and a new performance venue at THE QUEENS. My mates are producing the venue, so it all feels fabulous.

The cherry on top is that I’m bringing Carlotta down from Brisbane for her ‘farewell to Adelaide’ show. She is retiring on her birthday this year. So yeah, it’s all bloody happening this weekend! Incredible!”

Michael Griffiths: Greatest Hits performs at The Chamber at THE QUEENS, at various times, from Fri 19 Feb until Sun 21 Feb.