Michael Griffiths Is Growing Up For Feast Festival With Adolescent – Interview 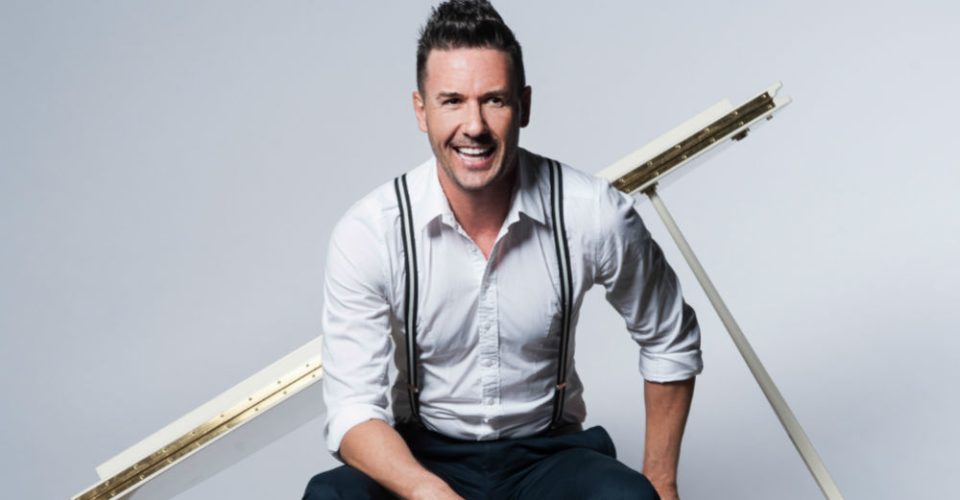 Adelaide’s favourite crooner, Michael Griffiths, has just turned 40 but still thinks he has a lot of growing up to do. Having performed in musicals including Jersey Boys, We Will Rock You and Priscilla Queen Of The Desert, Michael promises songs from all these shows as well as hits from his favourite musical genre – ‘80s pop.

For the past 3 years Michael has performed at Fringe Festivals around the world with his cabaret two shows featuring the music of Madonna and Annie Lennox, but for the 2014 Feast Festival the show is all about him.

We speak with Michael Griffiths over the phone and begin by asking if performing a show about his own life is exciting or terrifying.

“It’s much more terrifying than anything else!” he insists. “I’ve resisted talking about myself in the past because I’m really not that interesting. But I guess everybody has stories to tell and it’s actually just about having the confidence to say that I can talk about me and that it’s interesting.

“It’s taken me two other solo cabaret shows to get the confidence up, and 40 years to realise that comedy is about getting away with telling the truth; that’s my approach to presenting this show.”

Adolescent premiered in July at Noosa to a great audience response.

“They loved it!” he explains. “Plus they’d all seen Jersey Boys. The other songs that I sing are mainly ‘80s tunes and a bit of Dusty Springfield, which the older audience certainly enjoyed; they do so love a bit of cabaret. As much as I feel like I’m doing pop-cabaret and want to change cabaret’s demographic, I also believe that as long as people are having a good time, I’m happy.”

What can audiences expect from the show?

“Adolescent is about me feeling like I’m a young, emerging artist… but then I think, hang on, I’m actually 40! I’m not meant to be immature – but I am,” Michael says. “I look back at some of the shows I’ve done. Working in theatre on big musicals and cabaret, you’re kind of babied and you don’t really need to grow up. You’ve got all of these people around you looking after you, stage managers making you look good and you have audiences fanning your ego. So after 15 years of working in the business I don’t know how to do so many basic life skills. Everyone’s looked after me and I feel a little incompetent in a lot of areas in my life.”

“Oh bless you, mate. That’s photo-shop!” he laughs. “Or maybe good genes? I never eat fast food and I’m really active. I’ve been a keen cyclist for a long time so I ride a pushbike everywhere, which also helps. Besides, my work for most of my adult life has been performing so I’m always running around like a teenager in shows like Jersey Boys and Priscilla Queen Of The Desert wearing high heels and glitter.”

Although there are many ways that Michael believes he hasn’t grown up, we ask if feels of he has made some good changes since his adolescence.

“Well I do look after myself a lot better these days,” Michael says. “When I was 20, I just didn’t think I was going to get old. Now I don’t pull all-nighters, I don’t smoke anymore and I’d rather stay at home and have a nice glass of red. I live back in Adelaide too. When I was living in Sydney it was not always about good lifestyle choices. It’s nice to be grown up in Adelaide where you get the best of both worlds and enjoy the finer things in life.”

Michael grew up playing the piano and wanted to become a composer. While studying, he performed in amateur musicals in Adelaide and soon realised he wanted a career onstage. He studied at the WesternAustralianAcademy of Performing Arts (WAAPA) and started working on the musical Shout! immediately after graduating. Michael lists many career highlights, including his cabaret shows and being employed on Jersey Boys for over 3 years. He also tells us that the world premiere of Priscilla Queen Of The Desert as a highlight in his career.

“Priscilla was wonderful,” he says excitedly. “When we were cast, the show didn’t exist and so we were re-writing, re-choreographing and creating it from nothing. To be part of that creative process is a very rare, precious thing.”

What’s the next venture for you after Feast Festival?

“I’m doing the Fringe Festival circuit again next year. I plan to perform Adolescent for the Adelaide Fringe and Midsumma Festival in Melbourne. I’m also performing the Annie Lennox cabaret at the Perth Fringe Festival because they haven’t had her yet. I’m also working on a new show for Adelaide with a new writer, which will be very exciting.”

Michael is hoping to take the Annie Lennox show to the Edinburgh Fringe Festival next year, but confessed that he is a little worried about how the audiences would react to an Australia performing a show about a Scottish person.

“Imagine if an American came to Australia and did a John Farnham or Olivia Newton-John show. We’d be like ‘f**k off!” he laughs. “Although, there are enough Scottish people that have seen it in Australia and have loved it, so maybe an Australian in Scotland could get away with it.”