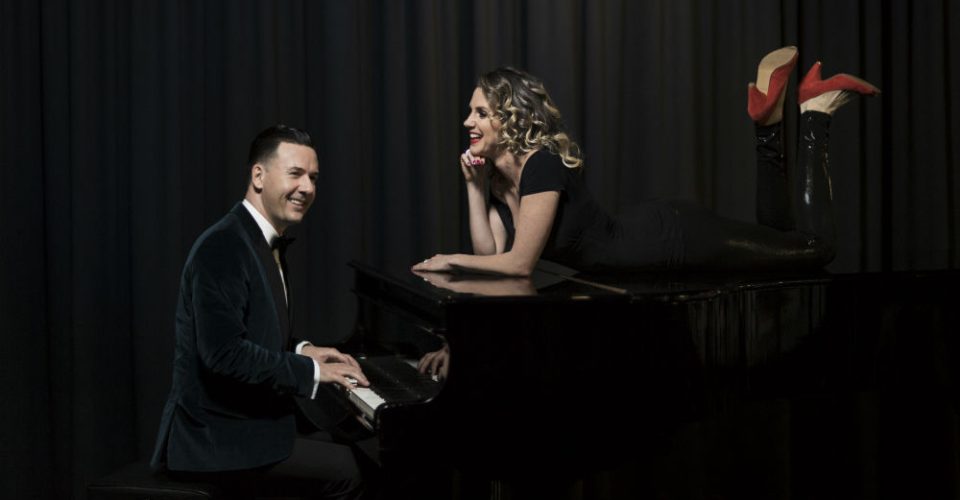 Cabaret superstar Michael Griffiths has had an accomplished 2016. He won a Helpmann Award for his Adelaide Cabaret Festival show Cole and was the ‘best reviewed cabaret show’ of the entire Edinburgh Fringe Festival. While retaining his position as Feast Festival Ambassador for the second year running, Michael is teaming up with his close friend Amelia Ryan to bring their new cabaret show Livvie & Pete to Adelaide – Australian icons Olivia Newton-John and the flamboyant singer and songwriter Peter Allen.

Griffiths and Ryan felt the Adelaide Feast Festival was a perfect platform to premiere the life and songbook of these two iconic Australian singers from their humble small-town beginnings, to world domination in sequins and jumpsuits.

The Clothesline speaks with Michael Griffiths during his short Adelaide respite following his successful Edinburgh Fringe season. We begin by asking, as Feast Ambassador, what he is most excited about for Feast Festival 2016.

“I guess it is the new hub that really stands out. It has been launched with the view that it would then be an amazing year-round hub for queer content, whether it’s Adelaide Fringe or Cabaret Festival time. The hub will stand out as a highlight of this year’s Feast Festival.”

Have you been able to see it yet?

“I had a quick tour of the venue when it ran as Tuxedo Cat before I went to Edinburgh,” he says. “It isn’t finished yet, but it will be… Touch wood. It is a fabulous spot, and very exciting for Feast because I know how much of a struggle it can be financially hiring venues. I think it is really great for artists because they were paying for the venue hire before they got any profits, so this way the artists are going to be making money quicker. I think it’s a win-win for everyone.”

Where did the idea of Livvie & Pete come from?

“For a long time now people have been telling me I should be performing Peter Allen songs, because I’m an Australian and I play the piano,” Michael says, “but I’ve resisted because of The Boy From Oz musical. I felt it had already been done and, besides, Todd McKenney has toured Peter Allen songs for 20 years.

“I have been telling Amelia Ryan for many years to do a biopic show,” he continues. “She talked about Blonde and Cyndi Lauper, but I told her that she is Olivia Newton John. Then suddenly we thought, ‘Well let’s do this together! You do Olivia and I’ll do Peter.’ We are such good mates, I was her musical director in Edinburgh and we both have a similar approach to our craft.”

Livvie & Pete will be performed in Ballarat in October prior to its SA and Adelaide Feast Festival premiere. Although the final song list is yet to be decided, Michael assures us that Xanadu and songs from Grease will feature as well as Allen’s I Still Call Australia Home and of course I Honestly Love You, written and performed by Peter Allen, but made much more famous when sung by Olivia Newton-John.

“The show is still in the making, but we have a feeling that it is going to end up being a bit of a sing-a-long whether we like it or not!” Michael laughs. “We will definitely encourage that because they are just such great songs.”

What draws you to Peter Allen?

“Peter being an Australian singer and pianist is one fascination, but also a lot of his songs have a musical theatre approach where there are stories in them,” he says, “so they’re not pop songs necessary in the contemporary sense. His songs almost always have a narrative; with me coming from a musical theatre background, that makes them very appealing, because it is not just singing them but connecting with the stories too. They are like a midday movie, you know what’s going to happen but you still cry at the end. They’re so beautiful and really get you in the guts.”

Congratulations on your Helpmann Award for Cole as part of Adelaide Cabaret Festival.

“Thank you,” Michael says. “It was a great honour to be recognised in that way, and I’m thrilled that it was for my show as part of Adelaide Cabaret Festival too. Adelaide has the premier Cabaret Festival probably in the world, so for an Adelaide show to win is just wonderful. I hope the Cabaret Festival is boasting about the award as much as I am [laughs].”

What is next for you after Feast Festival?

“I’m taking Cole to California, USA, in February,” he reveals, “performing in places like San Francisco, Palm Desert, Saratoga and Livermore Valley. Someone from one of these arts centres in California came to the Adelaide Cabaret Festival and Barry Humphries told him to go and see me. He loved the show so much and asked if I wanted to tour California.

“There are a lot of other shows in the pipeline in the UK and New Zealand and I hope to be part of the Adelaide Cabaret Festival again in 2017. It is always a thrill to be in Adelaide in June.”

Book at feast.org.au and outtix.net. Click HERE to purchase your tickets. [THIS SHOW IS NOW SOLD OUT]