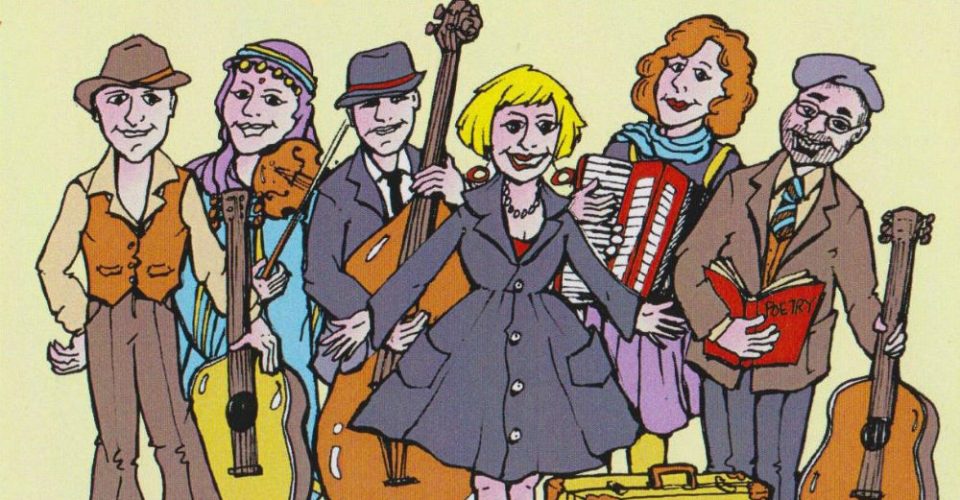 Kerry Reid is an Adelaide-based actor, singer, songwriter who has worked for many years throughout Australia and New Zealand, performing cabaret and solo shows. Her two alter egos, Miss Patsy DeCline – the Queen of Country Corn and Miss Kitty – an English undercover spy turned chanteuse, have delighted audiences and received acclaim wherever they have appeared.

We talk with Kerry about Miss Kitty’s fifth Fringe cabaret show, The Missing Years, and ask her to tell us about the now famous Miss Kitty.

“Well, ‘infamous’ is more appropriate,” she begins. “Miss Kitty is an agent with MI5 and has gone AWOL. She is essentially a loose cannon and now Interpol are after her – which is part of the reason she is hiding down here in the Antipodes. I think it was menopause that brought it on. Menopause and espionage don’t mix together very well and, although she’s really lost the plot, she’s very amusing with it.

“Miss Kitty has been in disguise as a cabaret singer for quite some time and all the stories are coming out in the course of each new show. So, the ongoing saga of Miss Kitty continues in this production, The Missing Years.”

Can you reveal anything to us about where she’s been while missing?

“It’s highly classified, of course,” Kerry says. “You’ll have to come to the show to find out but I guarantee that plenty of her secrets will be spilled on the evening. She’ll be revealing information about some of the undercover missions she’s been on in the past as well as what she’s investigating at the moment. I can give you a hint; she has been out of this world!”

Is Miss Kitty’s Karavan the name of the band in this musical show, or something that’s towed behind a car?

“A bit of both really,” she laughs. “Karavan, with a ‘K’, is the band that Miss Kitty has hooked up with. Karavan have been playing together for many years and they’re a ragtag bunch of very unsavoury characters that have come together through a love of Gypsy Jazz music. There are two acoustic guitarists, a double bassist, an accordion player and a violinist and Miss Kitty is the singer. Miss Kitty’s Karavan draw their musical influences from many different genres, with a little taste of Gypsy-jazz and there is always a twist, nothing is ever quite what is seems.”

Are the songs in the show originals, covers or parodies?

“We aren’t doing any of our original songs but arrangements of well-known songs, adding our own particular flavour. Some songs are definitely parodied, often with an interesting mash up of various unexpected tunes that you wouldn’t even consider putting together, but with Miss Kitty’s Karavan, there is always a bit of a surprise.”

How did you all get together?

“Miss Kitty was on the run, but Karavan also have their shady past,” Kerry says. “They managed to hook up in the underground and thought it was a good idea to present themselves as a band of travelling gypsy musicians. That way they could all keep moving but look relatively ‘legit’.”

This may be a tricky question but how did you meet Miss Kitty, Kerry?

“We met through my association with a certain country singer, Miss Patsy DeCline. Miss Kitty and Miss Patsy, both slightly hysterical women with colourful backgrounds, were clients of the infamous Freudian therapist, Dr. Otto Von Finklestein! Because I’m connected with Patsy DeCline, Miss Kitty became known to me. I felt like she was a part of me, so to speak.”

And are you having any treatment for this multiple personality condition?

“I probably should have treatment,” she says. “Miss Kitty definitely does have treatment, but she has to do it under an assumed name, otherwise she would be reported to the International Espionage Authority. MI5, ASIO, and Interpol – they’re all after her. But she keeps giving them the finger which is kind of cool, I think. Go Kitty!”

What can your audience expect from a night with Miss Kitty?

“They should expect a very good time with plenty of laughs, occasionally some tears, and to sing along to some songs they know as well,” Kerry says. “Miss Kitty’s Karavan definitely appeals to the Baby Boomers and Gen X-ers. We’ve done a number of shows over the last five years and have had Five-star reviews every time, which is a great endorsement. So, I can guarantee a fun time with some really terrific music and some delightful surprises.”

Miss Kitty’s Karavan – The Missing Years performs at The Jade Monkey at various times on Thu 18 Feb until Thu 3 Mar.