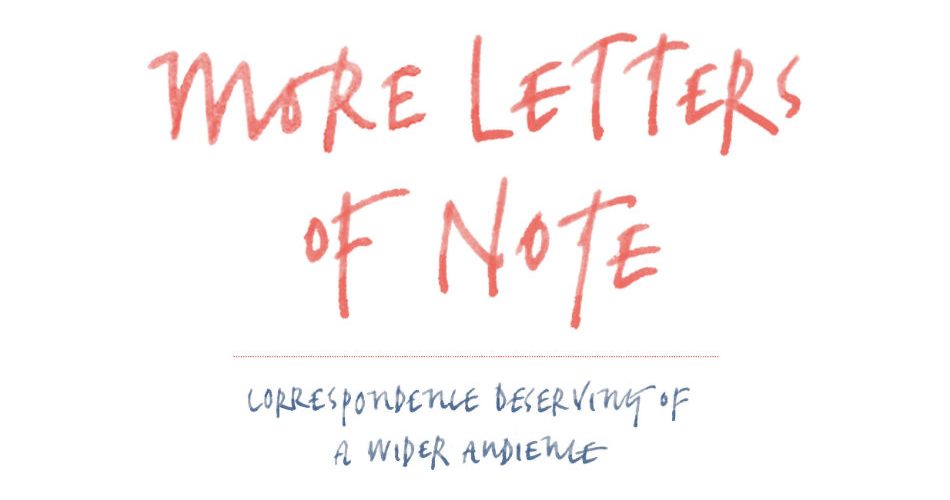 The follow-up to Usher’s Letters Of Note (and last year’s similarly lovely Lists Of Note) is another glossy tome full to bursting with letters (handwritten, typed, printed, transcribed, whatever) sent throughout history for just about every reason humanly possible. Consider…

The first offering, Torturing The Saxophone, comic artist and jazz enthusiast Robert Crumb’s wonderfully bewildered response to a CD sent by Swedish saxophonist and fan Mats Gustafsson (“I just don’t get it. I don’t understand what it is about”, Crumb ponders).

I’ll Rap Your Head With A Ratchet, producer Steve Albini’s lengthy letter to Nirvana just prior to working on their final studio album In Utero.

Sorrow Comes To All, a warm personal note of comfort from Abraham Lincoln to Fanny McCullough, the grieving daughter of a friend killed in the Civil War back in 1862 (“You are sure to be happy again”). 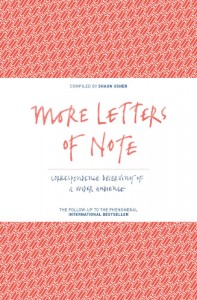 Husband Until Death, slave Abream Scriven’s final letter to his wife and family after being sold to another master in 1858.

Break Break Break, a quick and funny telegram sent by Sylvia Plath to her family after suffering a skiing injury.

1984 Vs. A Brave New World, which (of course) proves to be Aldous Huxley slightly crankily explaining the differences between his book and George Orwell’s after Orwell sent him a copy of 1984.

Janis Joplin Lives!, an excited letter sent by Joplin to her worried family in 1967 (three years before she died).

The JL123 Isho, a powerfully moving series of notes written by passengers of Japan Airlines Flight 123 on August 12 1985 when they knew they were doomed.

The Are Two Ways In Which This Can Be Done, a brief letter to the The Telegraph in 1913 by suffragette Bertha Brewster. The two ways? Either kill every woman in the UK or give them the vote, according to her.

Oh My Ass Burns Like Fire!, a 1777 letter sent by Mozart to a lover named Marianne which excitedly combines sexual shenanigans with another of his great interests, the toilet.

My Real Name Is David Jones, a joyful 1967 correspondence from a young David Bowie to the first American fan ever to write to him, one Sandra Dodd.

And P.S. This Is My Favourite Memo Ever, in which South Park co-creator Matt Stone details what has and hasn’t been removed from the 1999 South Park movie according to the advice of the MPAA censors. And yes, it makes them look far dirtier than him, and surely every book should end with jokes about Saddam Hussein’s penis.

More Letters Of Note is now available through the Allen & Unwin website. Click HERE to purchase your copy.