My Vagabond Boat Sails Into The Banquet Room, With Nigel Ubrihien At The Musical Helm – Adelaide Cabaret Festival Interview 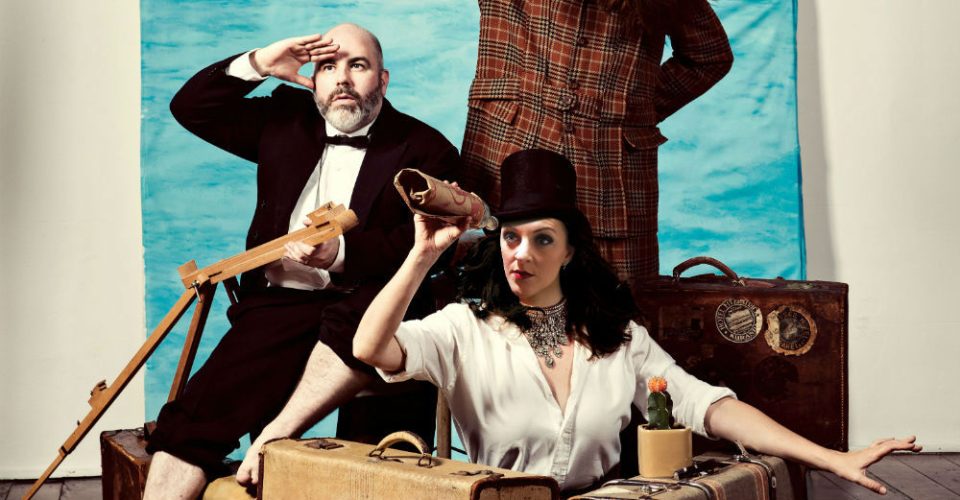 My Vagabond Boat is an exploration of ideas, looking at various situations of displacement, belonging, and humanitarianism. Observing many things and presenting them in such a way that leave the audience thinking a little more closely than perhaps upon their arrival, this is a light-hearted show meant to make you laugh and wonder. The Clothesline chats with Nigel Ubrihien, the Musical Director who also stars with Gillian Cosgriff and Mitchell Butel, about the idea behind the scenes, the importance of creating a space for thought and about the hilarity and significance of their costumes.

We ask Nigel to explain why Mitchell Butel is wearing a bear head; inside joke or crucial to the plot of this Adelaide Cabaret Festival show? 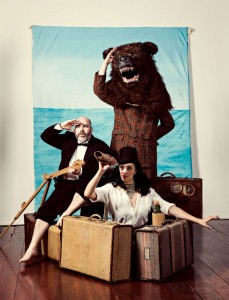 “The bear head is symbolic in that it is simultaneously terrifying as well as absurd, which was our main aim really for this character,” he begins. “Something that implied the feeling that something is uneasy with this world, and as soon as we saw it out one day we all understood that ‘there is our head’; it didn’t need further conversation really. Sometimes these things just present themselves.

“It was the best photo session really; we had a lot of fun with it and so many laughs. It’s been a really great group effort, from the original conception of the idea to how we have brought it altogether and to the rehearsals that we have only recently started. It’s exciting seeing something come together like this from beginning to end.”

Although you are the Musical Director of My Vagabond Boat, do you have other roles that keep you busy?

“Yes actually, I am involved in many things all year round really,” Nigel says. “I’m a composer, arranger, actor, musician, lecturer at NIDA, writer of musical plays, promotional work and have the opportunity to play in orchestras. I am really fortunate in that I get to enjoy the most diverse job. I almost forget sometimes when I may be asked to play the piano in a show. I occasionally have to remind myself, ‘Oh, that’s right, I can also perform. And play. Fancy that!’

“It’s amusing to be able to surprise people with the information that I can cover more ground than perhaps they even knew they needed me to. During last year’s Cabaret Festival we did a performance of Everybody Loves Lucy, and I was acting as well as playing the piano in that show.”

Adelaide audiences will be the first to experience this world premiere of My Vagabond Boat before they take it on tour.

“We have been offered a season in NSW but we aim to ensure our first show is perfect for Adelaide. It’s also the time we get to see the show in front of an audience and find anything that may need a little tweaking. We will then tour hopefully next year overseas which, depending on the touring schedule, would likely be about six months worth. We travel a lot with this style of job and it is all part of the beast really.”

Are you showcasing a specific story or is this a collection of musical numbers?

“The show has three simultaneous storylines, really,” Nigel says. “Essentially the piece is about displaced composers Kurt Weill and Friedrich Hollaender; we thought their lives were similar and we started talking about their stories and the time they spent fleeing persecution, and how they enriched the cultures and the families of where they fled to.

“We looked at our own political environment and our own refugee situation and decided to showcase a little of the Kurt Weill story, as well as the story of a contemporary refugee. We really wanted to present these three stories and not be political about it, but rather play them out and let the audience decide on how they felt about it all.

“Musically, the compositions in our show are Germanic stylistically and have the sound of something you may have heard back in the 1920s/1930s as well as some contemporary offerings,” he adds. “It is hard to put all of this into a small blurb, but it is interesting to be able to put these tales out there and hope people come along and enjoy an educational, funny, enlightening evening.”