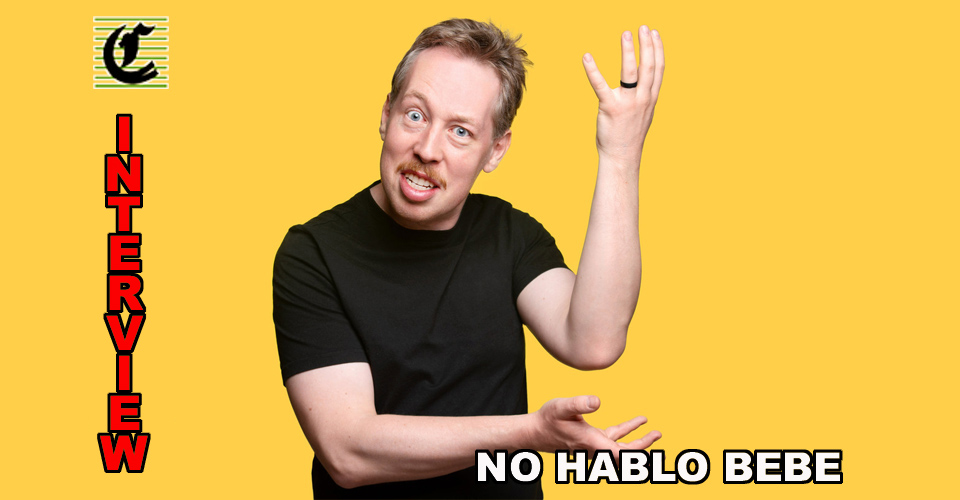 Michael Connell seems to like a challenge. Ignoring the rule about never working with children, Michael creates a routine about his child. Writing a comedy show which puts your parenting skills under the spotlight, including teaching your child things for which you only have the most basic skillset yourself…… all promises to be one very silly hour of comedy.

We speak with Michael Connell and begin by asking him whether there is a risk that by calling the show No hablo bebe people might think the whole show is in Spanish and not come along because they wouldn’t understand it?

“Actually, yes,” he says. “However I thought it was worth running that risk because the title would hopefully appeal to people who are like me and speak a bit of Spanish. Also, I’m partly doing this show to push me to improve my Spanish. If it turns out the crowds coming to the show don’t speak English, it’ll force me to get a LOT better REALLY quick!”

Why did you choose Spanish as a second language for your daughter in lieu of, say, Latin or Mandarin?

“It was a bit of a stretch convincing my wife that I could teach our daughter Spanish,” Michael says. “I think if I’d said I was going to teach her a language like Mandarin or Latin my wife wouldn’t have been on board. Luckily she is very supportive of my crazy ideas, and I hit her with all the selling points of Spanish (don’t have to learn a new alphabet like Mandarin, third most spoken language in the world, fastest growing language online, etc.) so she was okay with it. She might not have got onboard if I’d said I wanted to teacher something more exotic like Klingon or Dothraaki.”

Is it true that the entire premise of your show is false in that you actually speak Spanish rather well?

“I wish,” he laughs. “That would be a great twist, but sadly that’s not the case. I’m very much still a learner, which is good for the show because it adds to the comedy. For example, I’m working on my accent but sometimes when I speak Spanish I worry I sound like Brian Brown ordering Italian.”

Have you become an expert on the various language learning apps available?

“I absolutely have! I have the most pimped out Duolingo Owl mascot to prove it.”

Do you expect conversational Spanish to come in handy at your daughter’s child care centre?

“It might,” Michael says. “There’s a couple of Venezuelan families at her day care, and I’m trying to encourage her to play with their kids. She keeps hanging out with the Chinese kids though, and I’m like, ‘no, no… don’t be friends with them… Daddy can’t learn another language…’.”

How is parenting going aside from the language lessons?

“Actually, really well. I spent years juggling at kids parties, so now keeping one kid occupied is a breeze. She’s not hopped up on sugar, I can send her to bed if I want to, and if it gets really tough I can tag out and let me wife handle things. I mean, that’s how I feel now… ask me at the end of Fringe when I haven’t slept for a month.”

Will there be any juggling in this show?

Yes, there will be juggling in the show,” he says. “Thanks to the pandemic I’ve had a lot of time to work on my tricks, so I’m excited to show them off at Adelaide Fringe. During lockdown everyone said I should get into home baking – luckily I didn’t because that would’ve made a much more boring Fringe show.”

Do you think this show will appeal to people of all ages and language skills?

“Yeah, anyone can come along to this show. If you don’t speak any Spanish you’ll be fine because I explain everything as we go. If you do speak Spanish you’ll get the jokes a bit before everyone else and feel smug.”

You are known for ‘squeaky clean comedy’. Do you think Adelaide is ready for this?

“I’ve seen some pretty crazy stuff at Fringe over the years; people hanging from the roof by hooks, human dart boards, guys swallowing swords. I’m doing an hour of stand-up about being a dad and learning a second language – I’m sure Adelaide will cope. If people start fainting during my routine about day care, I’m gonna be very surprised.”

Is there anything else you would like to tell us to convince us to come along to see No hablo bebe?

“I’ve been working on this show for over a year, so please come along,” Michael says. “It’s going to be a lot of fun, and if I don’t do a good job teaching my daughter Spanish, money from ticket sales will help pay for speech therapy.”

Michael Connell performs No hablo bebe at Hell’s Kitchen at Rhino Room from 6.15pm on Tue 9 Mar until Sat 20 Mar, at Theatre Two at The Parks Theatres from 6.45pm on Sun 7 Mar until Sun 14 Mar and at HAT’s Courthouse Cultural Centre Auburn from 6.30pm on Sun 21 Mar.