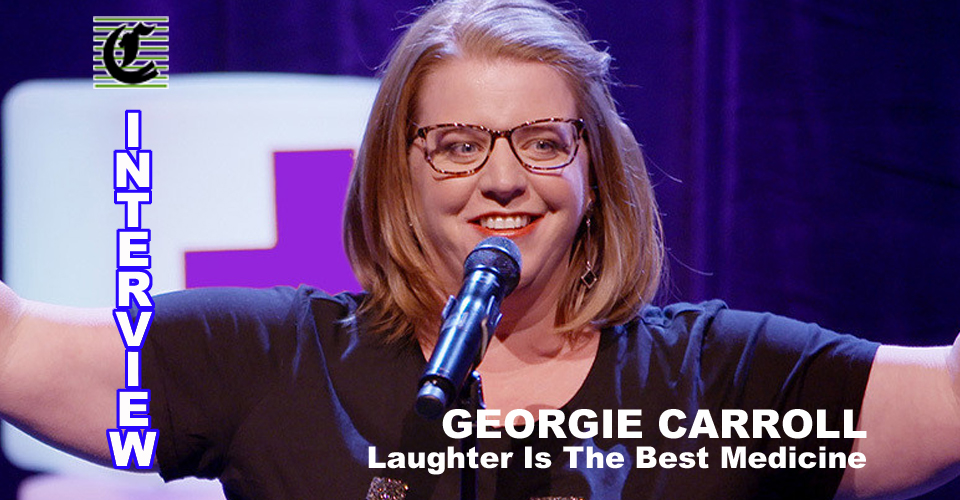 Manchester-born and Adelaide-based nurse and comedian, Georgie Carroll was born to do comedy. Even at her earliest stand-up spots almost a decade ago, she seemed completely comfortable in front of an audience. She talks about things people don’t; her twenty years as a nurse has meant she is not shy in talking about subjects others might avoid. She shares the same kind of allure as Miranda Hart, Sarah Millican and fellow nurse Jo Brand, in that she feels like a friend cracking you up at a gathering as much as she does as a top notch comedian, being on the telly (Have You Been Paying Attention?, The Project), writing books and making comedy specials.

We speak with Nurse Georgie Carroll where she explains that her start in comedy was almost accidental.

“I sort of just fell into it,” she says. “I thought, “I’d like to have a go at that’. I initially thought that you just get and talk to people, and I already do that all day. But, you quickly realise that there is a lot more to it than that; writing, practising, learning you don’t have to say something new every time you get up…

“For me, comedy has been a great addition to my life. It’s brought creativity, adventure, travel and applause; it has fired up my life. Some people don’t crave that. My husband, for example, likes same routine, same job, same pub, and he’s happy with that. But I think I was always looking for something else. Even when I was a teenager I used to lie a lot and would never say ‘We went to the movies last night’, I’d always say things like ‘We went to the movies last night AND SOMEBODY GOT STABBED!’.”

Did being a teenage liar give you a good foundation for comedy?

‘‘YES, absolutely! I wanted things to be more dramatic. When I look back, it was definitely for the attention,” Georgie says. “But now I have a great husband, two nearly grown up kids and an audience who likes what I do. There are always new goals, sell more tickets, do bigger venues, tour more, but it is hard to make a living doing it. I have continued being a nurse and comedy has been a gift. And I have plenty of attention now!’’

In a career where getting a bunch of people in a room to laugh together is literally the name of the game, has the last year been especially weird for you?

‘‘So weird,” she agrees. “Usually you write a new show every year and this year nobody knew what was going to happen with shows and festivals. So big shout outs to the people who wrote a whole new show not knowing when or if they would be able to perform it. This year I decided to do a ‘Best Of…’ show because there is stuff a lot of people haven’t seen before.

“My first show was in the back room at The Maid & Magpie to about 70 people, and I’ve done a 750 person tent in Gluttony. It’s the pits not being able to perform, but I have ended up being really busy this year. A comedy special I recorded in Canberra has been bought by Channel Ten so that’s going to be screened a few times this year, and I’ve written a book which comes out in April.

“And then I went viral!” Georgie says, “I’ve got a video that went crazy on Facebook and has seven million views. That is interesting because when I look at the stats half my audience is now in America. It’s 50 percent USA, 25 in the UK and 25 percent from Australia.’’

They say that laughter is the best medicine. As a medical professional can you confirm this?

‘‘Absolutely! And making people laugh is all I want to do. Actually, I don’t want to just make people laugh,” she says, “I want to make people lose – their – shit! That is my sweet spot. When people can’t catch their breath and are doubled over, that’s when I feel truly blessed.’’

Nurse Georgie Carroll performs at The Boboli at The Garden Of Unearthly Delights from 7pm on Tue 23 Feb until Sun 7 Mar.