Oklahoma! Performs Under The Stars At Four Oaks Farm In Littlehampton – Interview 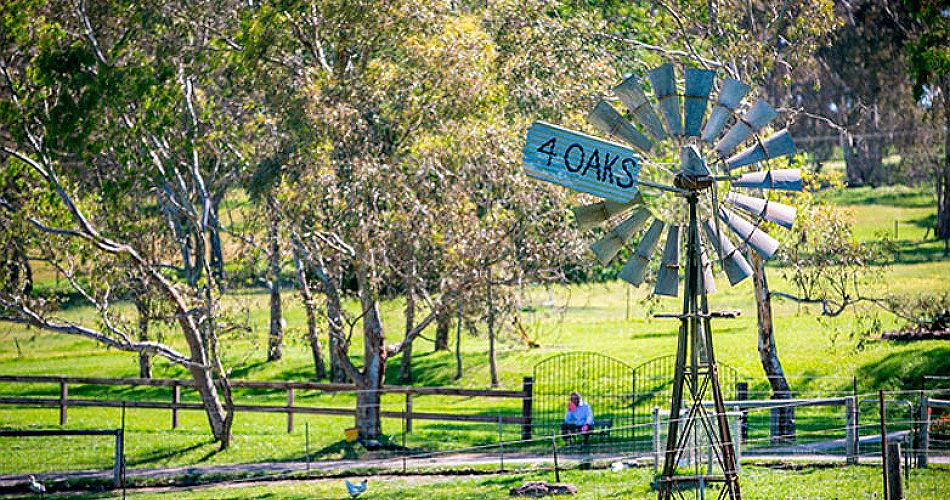 The first collaboration between composer Richard Rodgers and librettist Oscar Hammerstein II was Oklahoma! The show was based on the 1931 play by Lynn Riggs called Green Grow The Lilacs. Opening on March 31, 1943 it ran for an unprecedented 2212 performances. Oklahoma! set the standards for the book musical, a musical play where the dance and songs were integral to the telling and progressing of the story and portraying the emotion of the story. With classic songs like Oh, What A Beautiful Mornin’, Surrey With The Fringe On Top, The Farmer And The Cowman and Oklahoma!, it was also the first musical to have its entire score recorded, creating the original cast album.

“The story is set just after the turn of the 1900s when farmers and cattlemen were fighting over fences and water rights. In among that you have a cowboy called Curly and a hired hand named Jud who are both in love with Laurey. Laurey and Curly clearly like each other but both are too stubborn to admit it to the other. Alongside their love story you have Ado Annie who just can’t say no to Will and Ali!”

Why have you decided to present this play?

“My troupe had just run two successful seasons of Pirates Of Penzance On The Popeye. Many of them had previously performed Oklahoma!, so that was a seed in my ponderings of what show to do next. I’d played for Oklahoma! quite a few years back. It’s a show that people love and is filled with such wonderful classic songs. It has taken a while for me to feel ready to present it and it is when a few little things either fall into place or keep popping up and that is when you think ‘ok yep now it is time’.

“I think what draws me to Oklahoma! is the ‘realness’ of the characters. For me, Curly and Will [Andrew Crispe and Charles Smith] are boys I went to school with and for me both Laurey and Ado Annie [Rebecca Raymond and Alana Shepherdson] reflect two parts of being a woman. Laurey has the innocent side that can bring forward silly decisions (I know I have made some of these to try and get the attentions of a partner!) and Annie has the flirty side that can also bring forward the same. We all behave in different ways when in love (especially when younger) and this show explores these different aspects in a very interesting way. Some of the ways of dealing with this present a darker side which I think is still relevant today.”

What inspired you to present it at Four Oaks Farm?

“Once I had come up with the idea to do Oklahoma! and to use horses, I did a Google search looking for a farm to put it on and found Four Oaks. I took a country drive and headed down to the property. It was perfect for what I had in mind and while taking some photos Sue Vivian (the owner) rode up on her tractor and I told her of my idea. She loved it and said that she had always wanted to do music events on the farm but did not have the knowledge to make it happen! So it was a match made in heaven!

“Earlier this year we ran a Good Ol’ Fashioned Barn Dance, just to give the venue a trial and to see whether people would make the trek and it was really successful so we moved to the next step of doing Oklahoma!. When casting it turns out that a number of the cast I wanted also had quite extensive experience riding horses.”

How will your production compare to major productions of Oklahoma!? What is it about Four Oaks that will make this show different or to stand out?

“This show is traditionally performed in a theatre with a large cast and orchestra. In comparison, we have a great quality smaller cast of thirteen and an orchestra of eleven and we are heading out of the theatre! We are doing a fully staged version of the show with the barn as a backdrop for the show. When I first drove out to Four Oaks and saw the windmill in among a pond with geese, chickens and an emu…I was sold!

“Being surrounded by the stunning hills and farm backdrop creates a feel that no theatre stage can reproduce. The most exciting part is that Four Oaks is a horse farm and so the other stars of our show are the farm’s horses and ponies! They make appearances in many scenes and will probably steal the show! I have not found any evidence of this being done anywhere in the world before and hope it creates some magical moments for those seeing it.

“As an accredited tourism business, I also have standards of sustainability I have to reach and so putting the show in its natural settings means no need to build sets. Taking this a little further, the programs will be made of seeded paper so once you have read them you can take them home and plant them as a lovely reminder of your time at the show!

“Lastly as there is the space to do so we will be having a mini country fair with pony rides, local crafts, baked goods and a fundraising sausage sizzle, just to add to the ambience!”

Will there be live musicians?

“There will be an eleven-piece orchestra under the music direction of Mark DeLaine. These musicians are wonderfully talented and I have worked with them all at some point in my many years as a musician. They come from many different backgrounds including cruise ship work and performing with the Adelaide Symphony Orchestra to the Henry Mancini Institute Orchestra.

“You would have heard many over them over the years in pubs, clubs, orchestra pits and under my musical direction – on stage! The orchestra will be visible for the whole show and there will be an opportunity for children and interested adults to speak with the musicians and learn a little about their instruments both before and after! This is an important part of my overall goal of making theatre exciting and inspiring for both future performers and audiences.”

“I love supporting local performers and making theatrical experiences unlike any other. Even my poster was designed by South Australian artist Anthea Wright. My wish is that people can enjoy my productions with their friends and families and leave with wonderful memories and stories to share. We are so lucky to have such talent and such beautiful places to present events in. I hope to see many new faces at the show coming out and seeing what we have been up too!”

Book at dramatix.com.au. Click HERE to purchase your tickets.