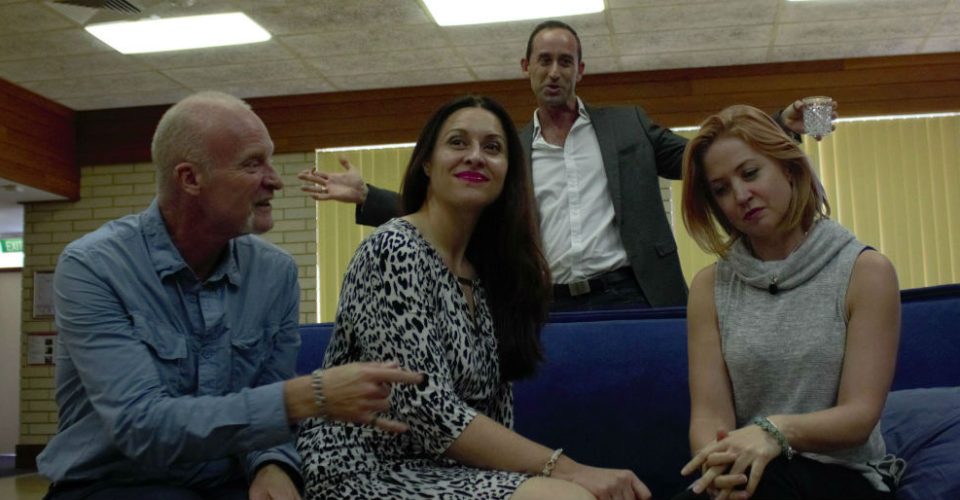 Nobel Laureate Harold Pinter has been dubbed one of the most influential British dramatists in history. With a career that spanned 50 years, the screenwriter, playwright, actor and director is known for his many works including The Go-Between, The Birthday Party, Betrayal, The Homecoming, The French Lieutenant’s Woman and Sleuth.

Director and former head of NIDA Acting Tony Knight, in partnership with Mystique Productions, is bringing Old Times by Harold Pinter to Space Theatre for a limited season.

We speak with Tony, via email.

“Old Times by Harold Pinter was first produced in London in 1971,” he begins. “The play deals with the visit of an old friend, Anna, to the home of married couple Katy (Charlotte Rose) and Deeley (Marc Clement). Anna (Rachael Wegener) and Katy were best friends years ago when they were young women starting out on their professional careers. Through the course of the evening old secrets are laid bare – but who is actually telling the truth. The story gets even further complicated when it is revealed that Anna and Deeley also knew each other in a past life. At the centre of all this lies a mystery, a dark and sinister secret that is revealed only at the last minute.

“Old Times comes at a particular point in Pinter’s writing, marking a transition in both his personal and professional life. The play deals with personal relationships – between old friends as well as husband and wife. There is a sense of betrayal of trust as well as jealousy, envy and remorse as old wounds are exposed and scores settled. Pinter never fully explained what Old Times was about, encouraging different interpretations of the characters and the dramatic action of the play.

“While not specific, nonetheless, in hindsight it is possible that in writing Old Times Pinter was influenced by the breakdown in his marriage to Vivian Merchant, and his clandestine affairs with other women at this time,” Tony says. “Vivian Merchant was a truly exceptional and brilliant actress, and had appeared in a number of Pinter’s early plays, notably The Homecoming in 1965, and was Anna in the original 1971 production of Old Times. The delicate nature of personal relationships between friends as well as in a marriage was something he was to further concentrate on in a later work, Betrayal, which he wrote in 1978.”

As a director, what inspired you to choose this show?

“I’ve always been attracted to and thrilled by Harold Pinter’s plays – they are absolutely unique to themselves and brilliant in their range of subject matter, characters, language and dynamic expression. When Rachael Wegener (Mystique Productions) and I started to formulate the idea of starting up a new company in Adelaide we knew that in order for us to make a successful start we needed to do a play by an established author that would immediately attract interest and an audience. Like me, many people love the work of Harold Pinter, so we knew we would be able to attract attention by the very fact we were producing a Pinter play.

“Furthermore, Old Times was a play that while known about was not one that had been seen in Adelaide, let alone Australia for many years,” Tony says. “The play was initially successful in 1971, but there after it was not widely produced until the beginning of the 21st Century. Subsequently, it has been produced many times and in many different places in the world throughout these first two decades of the 21st Century, including a 2013 London production, featuring Rufus Sewell and Kristin Scott Thomas, and a 2015 New York production featuring Clive Owen. It would seem that the ambiguity and mystery of Old Times, as well as its theatricality, has struck a resonate chord with the zeitgeist of the 21st Century.”

Many who have seen Pinter plays in the past will say that, as a writer, he likes to get audiences thinking deeply and, on occasions, to intensely confuse them.

“Yes – there most definitely is that ‘thinking’ side to Pinter’s work; but that doesn’t necessarily mean it is all dry and relatively academic – even at his most ambiguous, as in Old Times, he is extremely theatrical. He uses language, characters and situations to startle and challenge perceptions. There are a number of fantastic theatrical moments in Old Times that aredeliberately confusing. The male character, Deeley, for example, has a number of extraordinary speeches that are baffling, or rather the reason why he is saying these things is relatively baffling; he is asserting his power but sometimes what he says is so irrational and ridiculous – it is highly theatrical. Pinter, first and foremost, is a man of the theatre rather than intellectual academic study.”

Tony tells us about the music from the ‘30s and ‘50s featured within the show.

“All the songs have a dramatic purpose in the moments in which they appear,” Tony says. “What is of great significance is the lyrics from the respective songs, and how Anna and Deeley use these lyrics as means and tactics in their competitive game over Katy, as well as using them as weapons against each other, and reflecting their own individual desires, needs and fears.

“There will be some pre-programmed recordings in the pre-show of these and other songs by various major artists from the twentieth century as the audience take their seats prior to the actual beginning of the show,” he adds. “I don’t wish to give too much away, but Pinter chose these sings deliberately and in making their respective points you may be surprised by what you hear, or think you hear, as the songs don’t necessarily sound like they were originally intended to be sung.”

Is there anything else that you would like our readers to know?

“Only that we would be delighted and thrilled if people get in and help us in establishing this new company by buying tickets; and coming along to see this truly exceptional play,” Tony concludes. “We don’t think you will be disappointed but rather experience something wonderful and unique.”