Our Solar System: It’s Like Storm Boy… If The Pelican Was An Octopus ~ Adelaide Fringe 2020 Interview 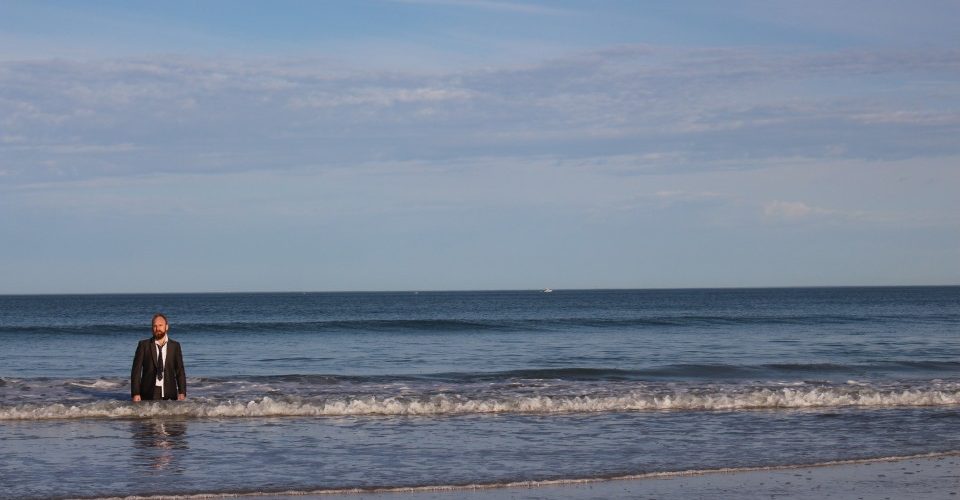 Safari Street Creative is a new local theatre company who will be presenting their first production Our Solar System at this year’s Adelaide Fringe. Previously based in Melbourne but now residents of Adelaide, The Clothesline speaks with writer, actor and producer Spencer Scholz and director Samantha Riley, who begins by telling us about this year’s Fringe offering.

“It’s basically Storm Boy if the pelican was an octopus!

“An intimate one-man performance, Our Solar System is a retrospective about time, place and how it shapes us. The story is told by an unnamed protagonist – a 30-year-old office worker returning home from living abroad to pay his respects at the funeral of someone who had a great impact on his life – a solitary fisherman from the Yorke Peninsula. The play follows the man looking back on the time he spent living with the fisherman and his wild daughter as a young boy on a deserted beach a million miles from nowhere- and how this seemingly unassuming moment in time impacted his life beyond his understanding.”

How did Safari Street Creative come into being?

“Very quickly,” Spencer says. “Sam and I have been staging productions for years interstate for one company or another but when we moved back to Adelaide a number of years ago all of that stalled somewhat. We both got the itch to get back into creating our own work at pretty much exactly the same time last year so when we finally made the decision to say ‘let’s do this’ it didn’t take long for the show and the company to start building its own momentum and now here we are!”

Do you want Safari Street Creative to grow in size or are you committed to presented small intimate shows?

“I would love for Safari Street to grow and evolve from show to show and build its profile in the Adelaide arts sector. Adelaide independent theatre in general is experiencing quite a resurgence at the moment, with companies like Rumpus and others popping up to present new work so it’s the perfect time to try new things. All we want to do is tell interesting stories that audiences can enjoy on one level or another, so the size and scope of the shows is really irrelevant. It always has to start with a good story first, and the rest can go from there.”

Is it an important part of what you do that you have written this work as well as perform it and direct it?

“If anything it happened out of necessity rather than out of any great importance for me to both write and perform in the play. The decision to launch our first Fringe show in 2020 came about pretty quickly so it made sense for me to perform the show as well rather than go through the process of casting. The play draws on a lot of my own experiences growing up on the Yorke Peninsula so it is a more personal script in that sense too which helps. Sam is a fantastic director as well so I trust her completely to tell me what works for performance compared to what works on the page.”

You have written other plays. Why was Our Solar System chosen to be your first production as Safari Street Creative?

“I wanted to start with something simple. A lot of other plays I have written previously are two or three act pieces with larger casts which can be very difficult to stage in Fringe season when other artists are busy juggling multiple shows and your average Fringe show is also only an hour long. This was the most recent piece I have written too so it was fresh in my mind, set in SA which would be relatable to Adelaide audiences and a real challenge for me performance-wise as my first one-man show too so all those things made it feel like a good place to start for the company.” 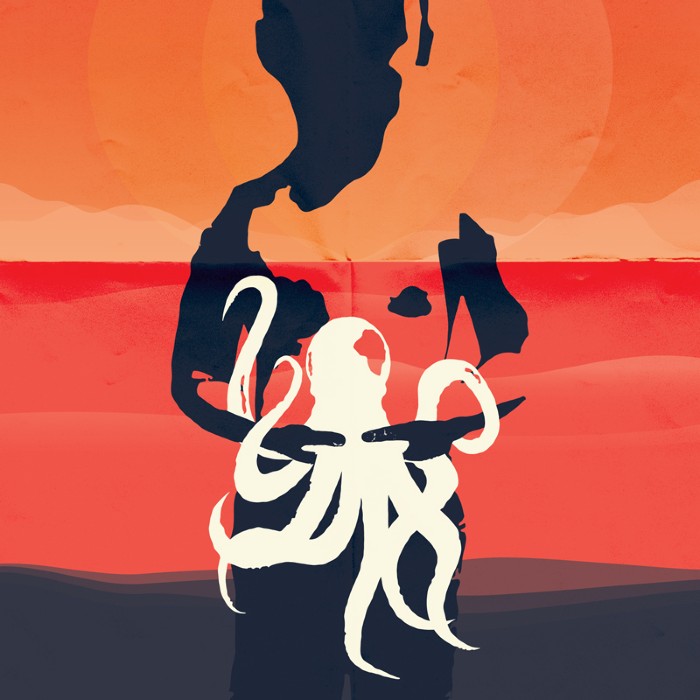 Do we need to be familiar with Yorke Peninsula to fully appreciate the show or could it be set on other parts of the coastline?

“Not at all. I think people in general have an affinity with the ocean (Australians in particular) and our relationship to it is a core theme in the play so I think anyone will be able to enjoy it. It’s basically a nostalgic love-letter to the ocean – I love writers like Colin Thiele and Tim Winton as they have a voice and style that captures the rural side of Australian life so vividly and with a lot of romanticism so I hoped to emulate that in this play as best I could.”

Your stated aim is to present works that are raw, dangerous and provide a unique experience for audiences. Does this mean this production will be a harrowing experience for the audience or only for the actor?

“I hope the show is not harrowing for anyone. If anything I just want to tell good stories in ways that capture and excite the imagination of the audience and I personally love theatre that feels dangerous and spontaneous, which was a big reason why we wanted to stage the show in an outside space. There is a life to site-specific performance that you just can’t replicate any other way. You go into a theatre and everything is so tightly controlled that the ‘performance’ element of it can almost be stifling. In site-specific works you’re at the mercy of your surroundings.

“There’s street-noise, city ambience, wind, birds – everything has an immediacy and possibility to it which is truly energizing for an audience. There are no theatre spotlights, no sound design, no set or stage. It’s just the actor and the performance. And I think that can be daunting but there is also something dangerous and truly exciting about that kind of storytelling. Anything can happen.”

“All I can hope for is that people get lost in the story. The idea of nostalgia, bravery and how we champion both it in today’s culture runs throughout the play so I hope people’s memories will be sparked of their own time visiting the beach as children growing up and remind them to be brave in their own lives. That idea of shared experience is integral to what makes theatre still relevant today- remembering that we are all the same and we can all learn from one another.”

Do you think the outdoor setting of The Barbara Hardy Garden will help to convey the atmosphere of being outside standing on a beach?

“We really wanted to simplify the theatrical elements that normally go with a show – rather than creating a static set, why not use a space that could naturally portray the scene we wanted?

“The play takes place in the building outside of the funeral so we wanted a space that could represent that, the Mallee Scrubland of Yorke Peninsula and show the physical passage of time. We use the natural light of the space too so that the play begins in daylight and ends in sunset. This site-specific style has been a staple of our work in Melbourne, which includes performing David Williamson’s The Removalists in the open front-bar of the Brunswick Hotel and Reg Cribb’s The Return in an underground carpark in Collingwood. 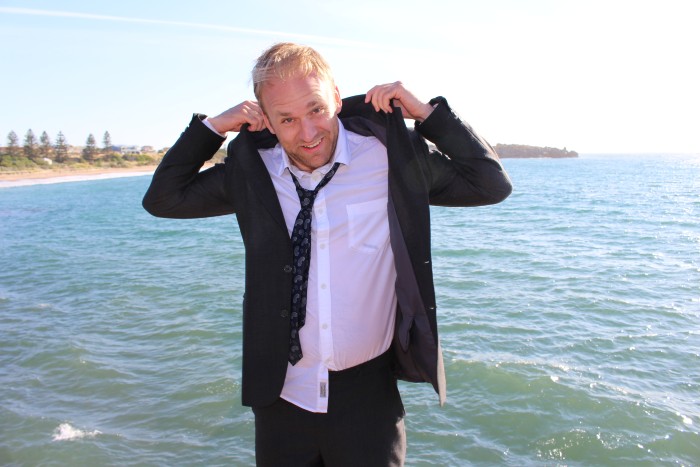 Samantha, you have been involved with some well-known musical productions. I take it there are no songs (sea shanties?) in Our Solar System?

What is it like to work in such an intimate production, i.e. where the author has to take direction from another person, because he is also the actor, but the director also needs to ensure that the author’s intentions are being met by the actor? Has this created any tensions?

“Neither of us has ever done a one-person show before so it has been a very complex thing for both of us to pull apart and required us both to re-learn a lot about performance. You have to approach things differently in a solo act compared to an ensemble piece and those things have become apparent through the rehearsals but there has been no tensions throughout the process. We have both worked together so much in the past so we trust each other implicitly to make the right decision if something isn’t working and what will be best for the show. Everything has developed organically from the words on the page to the finished show and I think it’s important to not get too precious about that sort of thing.

“We hope you will come along and enjoy the show!”

Our Solar System performs at The Barbara Hardy Garden at Holden Street Theatres from 7pm from Fri 28 Feb until Sat 14 Mar.