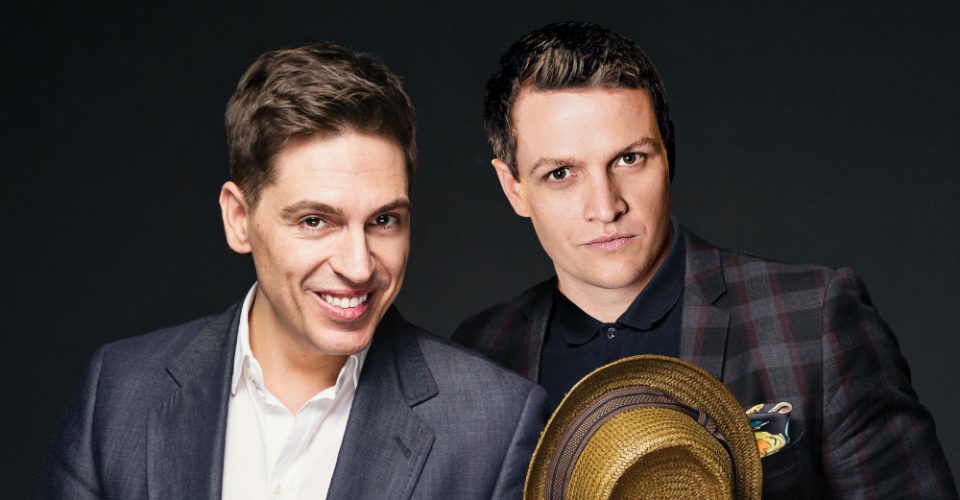 In the 1990s, the unlikely duo of Burt Bacharach and Elvis Costello collaborated to create a truly remarkable song, God Give Me Strength. They went on to write the Grammy Award-winning I Still Have That Other Girl from the 1998 album Painted From Memory.

In a song-cycle featuring the music of Bacharach and Costello, Michael Falzon (We Will Rock You/Swing On This) teams up with his Luke Kennedy (The Voice/The Ten Tenors/Swing On This) and a nine-piece band to present Painted From Memory at the Adelaide Cabaret Festival.

We speak with Michael Falzon who tells us that this show is very personal to him.

“Absolutely it is! But I think if you listen to the album you’ll find that a lot of the lyrics will definitely ring true for many people. For me, it took me through a period of my life of great change. I’m always listening to so many different sorts of music so every now and then something will really stand out, and this album was one of those.

“I wasn’t sure if I would ever have the opportunity to present it as a performance,” he says. “Maybe the odd song here and there, but after we staged this show in Sydney last year, we felt that certainly there are a lot of people out there that enjoy music of this quality and presented in this way. We’re very fortunate that we are now able to bring it to Adelaide.”

These two songwriters are amazing talented men in their own right. To have Bacharach and Costello join together and create what this album has become is something special again.

“It’s an interesting collaboration,” Michael agrees. “If you look at a song like Veronica, Elvis Costello co-wrote that with Paul McCartney, which would seem more like an obvious teaming. But you wouldn’t necessarily put Burt Bacharach with Elvis Costello. They first wrote God Give Me Strength back in 1996, which was a musical triumph on every level. I think it really rocked the music industry because people couldn’t understand how such a pairing could come about with these two gentlemen. But given all their experience, to be able to write something so powerful, really rang true for so many people. They continued writing together and created the Painted From Memory album.”

Is this show a reproduction of the album?

“Yes. We’re going to perform a couple of their other classics as well, from both men, but this album is presented in its entirety within the program with a nine-pieceband… and the obligatory flugelhorn creating some great music,” he laughs.

Will you be performing Costello’s Veronica?

“Yes, that will be one of my songs. There will actually be a couple of little surprises in the show, but I think the greatest surprise will be to just hear some of this music performed live – because it hasn’t been, in Australia. Although Adelaide will be the third time we have performed this show, the concept of presenting these songs in this format is a first for Australia.”

How did you and Jonathan Biggins come to create this show?

“I’ve had the idea in the back of my mind for quite a while, like many of the projects I find myself working on,” Michael laughs. “There’s a hat on my desk that I keep throwing ideas into and then I’ll pull it out later when the right time has come to be doing it.

“Jonathan and I have been friends for a long time. I bumped into him during interview at a night out at the theatre and we started talking about things we had been up to. When I told him about wanting to present this album, his eyes glazed over and he told me how much he loved the album. He started singing lines from songs to me. We almost missed Act Two [chuckles] because we started talking about the different songs, what they meant to us and how important it is; we both loved it. I asked him that very night if he would come and direct it for us. Of course, he said yes!

“We are very lucky to have someone like Jonathan involved in the project.”

“Bobby and I originally performed this show at the Recital Hall in Sydney,” Michael says. “Different scheduling means that he’s not available for Adelaide. My pre-requisite for Bobby, Luke and even myself was that you had to be in your thirties, you had to have experienced heartbreak to be able to sing this stuff… and Luke was happy that he fitted into all of that! Luke and I are working a lot together this year; Jesus Christ Superstar, Swing On This and now Painted From Memory, so it’s great to be working onstage with such great friends.

“This show will be very different to what people saw Luke and I doing in Swing On This last year, he explains. “That show was just he four of us taking the piss out of each other on stage and having a fun time swinging. But this is really bold, raw music. The arrangements that Isaac Hayward has created from the original album for a nine–piece string section is really very special, and pretty rare to hear anywhere.

“I hope audiences will enjoy the contrast from Swing On This, singing Bacharach as opposed to Irving Berlin or Cole Porter swing. They’re decades apart, emotionally very different and there are as some beautiful searing melodies in these songs which really do reach some heights – both vocally and emotionally.”

Is there a scripted story running through the show?

“The wonderful thing with this music is that each song tells its own story; each one has something important to say,” he says. “We have a clip at the beginning of the evening with both Elvis Costello and Burt Bacharach telling us what each song means and where they came from. We’ve all been through the same stuff in our lives, but as the songs come together as a whole, you’re pretty much following a journey with the two performers on stage. There is a narrative but it’s in the lyrics more than anything else.

“This album has become a modern classic; you could put it among Tapestry and the like. Twenty years on from its release and it’s becoming very well regarded. The surprise was that it was so unexpected that these two working together – Burt Bacharach’s style emotionally compounded by Elvis Costello’s edge – it just works beautifully,” Michael concludes. “Obviously, with Luke and me singing it, it will sound a little bit different, but that will just show how successful the songs really are. This show really is very beautiful and I’m so proud of it.”