Paul McDermott And Friends: The Pandemic Has Been Good For Me ~ Adelaide Fringe 2021 Interview 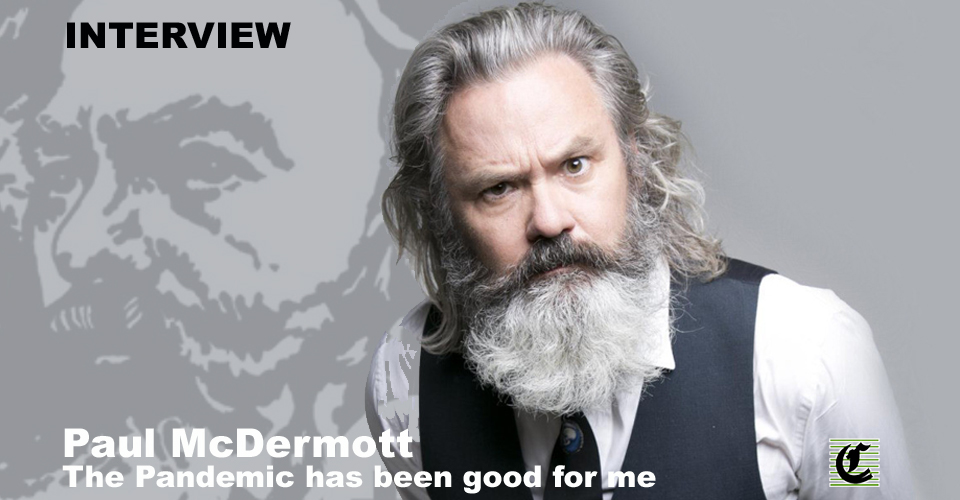 Paul McDermott is a national treasure to many of us who grew up worshipping at the altar of the Doug Anthony All Stars explosive and anarchic musical comedy in the eighties and nineties. Between vicious attacks on, well, everybody, to guerrilla antics on stage (removing peoples pants, stealing handbags, doing Esther Williams synchronised swimming dances using spraying beer cans as a water feature), they always felt extremely dangerous. Probably because they were! People would tune in to The Big Gig each week on the ABC in no small part to see what fresh outrage they would bring to the stage. Their live shows were legendary and remain some of my favourite gigs ever.

Post DAAS, they have all had careers Tim Ferguson (the cute one) has done TV shows, lots of writing and still performs comedy shows. Richard Fidler (the guitarist) is a celebrated broadcaster and writer of fantastic books. And Paul McDermott (the naughty one) has hosted TV shows like Good News Week, The Sideshow, ABC quiz show Think Tank and continued making music in shows like MOSH and The Dark Garden. His is a prolific (and stunning) artist, painting and drawing since he was a child. In more recent times he has released children’s books and won awards for his animated films. Thirty Five years after making his Adelaide Fringe debut with the All Stars, Paul McDermott returns Fringe 2021 with two new shows.

This past year has been very difficult for a lot of performers but I can’t imagine something like COVID would have meant that you have been sitting around with idle hands. The impression is you will always have a painting to do, something to write…

“The pandemic has been so hard for people,” Paul says. It’s been extra trying and caused so much mental anguish and sadness. I have had family and friends really struggling. But, the pandemic has been a pleasure for me. I’ve been left to my own devices, some of which are quite evil. I am quite insular and started writing immediately. It was a way of processing what was happening. Even before the orange clown was elected I was worried about the way the world was heading.

“Globally there has been a move to authoritarianism, right wing, conspiracy theorists, intolerance and volatile behaviour. But when COVID hit all that stuff got amplified and encouraged by a President who just lied about everything, every day for four years and it cost people their lives. When people have the attitude that it is not affecting them personally, they are not looking at the big picture stuff. I had six months of my year planned out around my book Ghost Bear being released. But it was just sitting on a dock in China for six months because nothing could ship. So I was directly affected very early on. When you are facing something as huge as this you need leaders who will lead and not just re-Tweet conspiracy theories and lies. It’s hard to reign in the idiots when the guy in the White House is giving them credibility by sharing their idiot claims.

“Four years of the orange clown lying every day, emboldening the idiots, people refusing to wear masks and saying it is because it is running against their personal freedoms – the disregard of how their actions can affect and impact on other people… ignoring the experts, ignoring the science,” he says. “We have rules in all parts of society to keep the general population safe. We have seatbelts in cars and traffic lights. It’s staggering to me the level of selfish self-absorption it takes to be a ‘Karen’, refusing to mask up in the supermarket or grocery store. And it’s a global shift. It’s happening all over the world. And it’s really grim. We have gone off the rails in many respects.”

You have always had a balance of beauty and darkness, good vs evil in your work, DAAS sang terrible things with beautiful harmonies, for instance, but there seems to be sadness and melancholy in a lot of what you do. The Dark Garden was beautiful heartbreak with stinging nettles in-between the songs. Is juggling those elements important to your process?

“I like the contradiction – chocolate covering the poison pill,” Paul says. “I also really enjoy when that balance completely collapses and just falls in a heap, sometimes you tell the joke and there is a silence as people process it. I love those moments. I enjoy vulgarity and swearing. When I started with the All Stars I had been a very shy youngster, scribbling away at my drawings and keeping to myself.

“Finding myself in a position where showing off, being outrageous and shouting at people was a long way from the conservative Catholic family I came from, it was very liberating. It was a door opening I never expected. Perhaps because our poor behaviour was so celebrated it solidified the idea I could do whatever I wanted in my show and it wasn’t up to me if people liked it or not. We also played a lot right from the start and it was on the street busking. With busking any audience is just passing by, so you need to hold people’s attention any way you can, which we became very good at very quickly.”

So, have you found inspiration in the world’s current darkness?

“Oh yes it’s been good for me,” he laughs. “There have been so many ideas and reactions I have been having all along during these times. I’d been having ideas for songs every day. I’d originally thought I would just start putting them out as I was doing them but I am a great procrastinator and I ended up with a huge stack of songs and that is part of what I’ll be doing in Adelaide.”

So you are doing two different shows SING TOGETHER With Catherine Alcorn and PLUS ONE with Glenn Moorehouse.

“The lovely Catherine and I will be singing songs together and separately. Some new songs and some ‘old favourites’, but the show with Glenn is mostly these pandemic songs. It’s a Pre-Post Pandemic show,” Paul says. “I was playing him some of the songs down the phone one day and one song in particular I got to the punchline and my wife burst out laughing in the room down the hall, and Glen said ‘You can’t say that!’ so I knew that one was done. A lot of people adhere to a mantra of ‘too soon’ but it’s never too soon for me. This will be the first time Glen and I have performed together on stage.”

I wonder who your audience is now? Some DAAS fans, GNW audiences, and people from the arts world?

“I am not quite sure who they are. There are some faces I have seen grow older with mine. I don’t really care if an audience likes what I do at the end of the day. With a show like Dark Garden everything was connected, the songs were all about death and loss of friends and people who were close to me and the between song stuff was all thoughts and ideas I had in the same period. Same with the paintings I used for the set. So I just present the show and I can’t be too concerned about what reactions it gets, because everybody has their own guidelines and morals, lines of offence and decency. And if you start thinking about that stuff too much you’d go mad.”

These shows will mark the 35th Anniversary of the DAAS’s first trip to Adelaide Fringe in 1986. Was that the first time you ventured out of Canberra?

“We did the Adelaide Cabaret Festival the year before I think,” Paul suggests. “We liked it and people seemed to like us, but that Adelaide Fringe was the first time we were doing a big room which was sold out every night. The main hub was down by the Fowler Factory and we were doing 500 people in Little Sisters. There was such a buzz around Adelaide and it was a very exciting time and we won Best Of The Fringe. Some guy asked us what we were doing next and we said ‘Going back to Canberra’. He said ‘You should do Edinburgh Fringe’ and we said ‘What’s that?’ We went the following year and that ended up being another incredible journey – busking all day, playing at night and just putting ourselves about. At one theatre they had a huge rig behind the stage and I spent three days and nights manically painting a massive backdrop 14  by 12 metre and shimmying up the rigging to hang it. The theatre threw it out.”

Have you kept much of that stuff? Backdrops, ephemera?

“I have some things but I’m not one for looking back too much. I’m more interested in moving forward. There is no real order to what I do have. I don’t have many photographs of myself. Somebody stole all my personal photos some years ago. When I was doing a cover for a DVD of all The Big Gig footage of the All Stars I rang the ABC looking for photographs so I could do a collage and they said ‘come down to the archive and help yourself’. I thought this will be the motherlode, because we did The Big Gig for four years and there was a photographer there clicking away every single episode. I got down there and there was a manilla folder with five photos in it. That was it!

“Stuff I have stored myself has suffered, video and audio metallic tapes have started to corrode and oxidise, some of my painting have started to fall to bits. Also there is not much footage of the early All Stars. Nobody had a phone in their pocket with a HD camera on it, so most of those early days exist only in myth and legend, which I quite like, to be honest. The Gilded Balloon in Edinburgh, where we did some of our most insane shows, at some point started filming everybody, but it was after us.”

There seems to be an unofficial archive of stuff on the various DAAS fanclubs and websites run by fans that are… let’s go with enthusiastic rather than scary.

“I used to find them scary,” Paul says, laughing.. “Turning up at a show and there’s be a hundred teenage girls out the front with their home made All Star jackets on covered in badges and patches. That would freak me out. Why are they doing that? They must be spending hours sewing those things and putting on all the patches and stuff. But then I realised ‘hang on, I spent hours sewing those costumes for us and doing all the patches and I have wound up being very flattered we had such an impact on people.”

Paul McDermott + Catherine Alcorn SING TOGETHER performs at The Chamber at THE QUEENS, at various times, from Thu 25 Feb until Sat 28 Feb.
Book at FringeTIX on 1300 621 255 and adelaidefringe.com.au. Click HERE to purchase your tickets.

Paul McDermott – PLUS ONE (w/ Glenn Moorhouse) performs at Rhino Room from 9:45pm on Tue 2 Mar until Sat 13 Mar.
Book at FringeTIX on 1300 621 255 and adelaidefringe.com.au. Click HERE to purchase your tickets.