Pennsylvania Avenue: A Lifetime Of Stories, Music And Memories From The White House – One of the MUST SEE Shows of The Adelaide Cabaret Festival – Interview 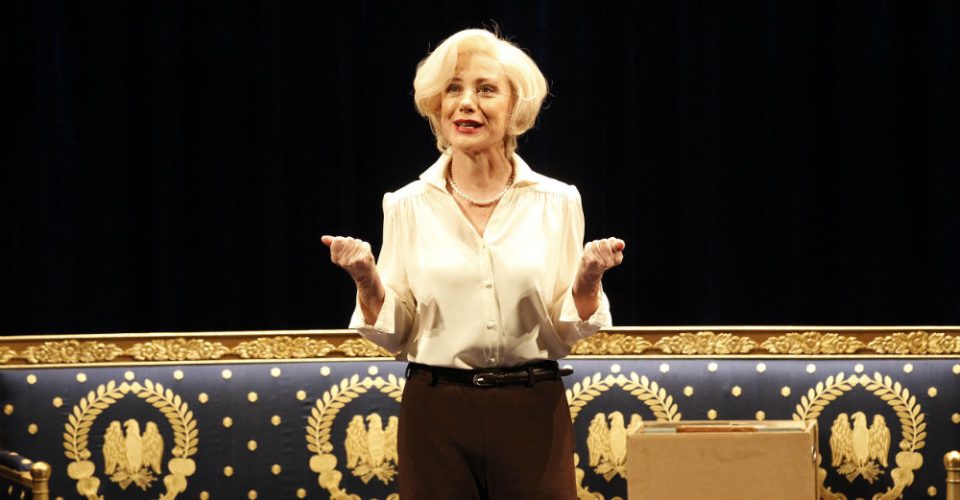 One of the stand-out performances of the 2012 Adelaide Cabaret Festival was Songs For Nobodies. It featured Bernadette Robinson portraying ordinary women’s encounters with iconic singers like Judy Garland, Patsy Cline, Billie Holiday, Edith Piaf, and Maria Callas. Written by Joanna Murray-Smith and directed by Simon Phillips, the show had successful runs throughout Australia.

The collaborative powers of Robinson, Phillips and Murray-Smith have combined once again in Pennsylvania Avenue. The Melbourne Theatre Company production finished an extended run in Melbourne in December 2014 and now Pennsylvania Avenue will see Robinson making a return to Her Majesty’s Theatre for the 2015 Adelaide Cabaret Festival.

Bernadette Robinson will play a total 33 different characters in Pennsylvania Avenue. The show centres around Harper, who remembers and shares stories and songs from the forty years that she has worked in the East Wing of the White House; the Presidents who reigned and the iconic singers who were connected to them.

We speak with Bernadette Robinson and she begins by expressing her excitement about coming back to Adelaide.

“I just love the Adelaide Cabaret Festival,” she remarks enthusiastically. “It is the most wonderful fantastic festival! I think having Barry Humphries is so inspiring! Adelaide is such a beautiful city and we are all really looking forward to bringing the show there.

“People absolutely loved the show in Melbourne,” Bernadette continues. “We had lots of standing ovations and we saw people coming back to see it multiple times. This piece is very powerful as it is both Harper’s personal journey as well as such an interesting walk through history. Of course, it is all through song too, which is the best way to tell a story, I think.”

Why did you start working again with Joanna Murray-Smith and Simon Phillips for another cabaret show?

“Because Songs For Nobodies was so successful we had to work together again,” she replies. “It was during our run at the Cabaret Festival in 2012 that it was actually picked up by Producer Harley Medcalf, who Barry Humphries had recommended to have a look at the show. From there, it toured for about three years, on and off.

“Simon Phillips has the power, because he is such a star director. Melbourne Theatre Company’s Artistic Director, Brett Sheehy, had said to Simon that if there was anything he wanted to do, he was just to tell him. So when a slot in Melbourne came up for the end of 2014, Simon wanted to do something with me; Joanna Murray-Smith seemed the obvious choice as writer. We were all available so off we went again!”

Tell us about Pennsylvania Avenue.

“It follows the story of Harper as she comes to the White House in 1962 at 18 years old during the Kennedy reign and goes right through to the Bush administration when she is about 60,” Bernadette explains. “It is her observations of what goes on in that long period of time and the singers that had performed there or had something to do with individual Presidents. We follow Harper’s journey; growing and changing as a person, falling in love and the secrets she carries.

“Pennsylvania Avenue also touches on the civil rights movement in America and on the Vietnam War,” she adds. “The singers that feature include Marilyn Monroe – due to her affair with John F. Kennedy – together with Aretha Franklin, Sarah Vaughan and even Bob Dylan. It is a very busy show. I play over thirty different characters throughout the performance, so it’s really demanding.”

Bernadette goes on to describe her favourite characters, including Harper’s Aunt Abigail, her Jazz Musician lover, each President of the USA and Barbara Streisand who comes into the story during both the Kennedy and Clinton Presidencies.

With musical direction by Ian McDonald, Bernadette will be backed by an on-stage 4-piece band consisting of keyboard, guitar, drums and saxophone, but will also add a number of other instruments throughout the performance that help them cover a large range of musical styles.

“There are so many fantastic songs that people will know and love like Don’t Rain On My Parade, Cry Me A River and other unforgettable songs that created their own moments in history.”

Are there plans to tour the show after the Adelaide Cabaret Festival?

“There are, but I’m not sure if the ink has set on the plans just yet,” Bernadette concludes. “I can’t say much, but things are looking very hopeful and positive.”