PlanB: Time Is A Diamond And The World Is Their Oyster @ The Gov on Fri 6 May – Interview 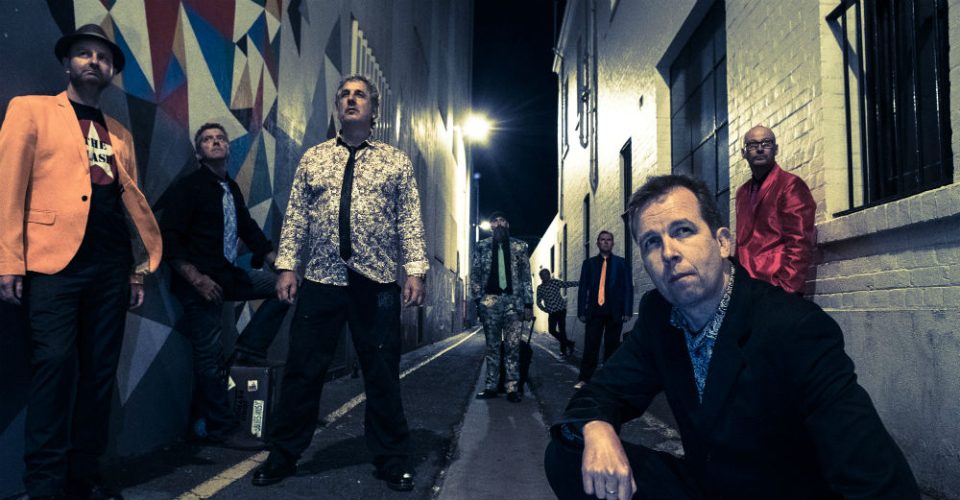 Fresh off the release of their single and video for Psycho Happy late last year, Adelaide pub rock ensemble PlanB have an action-packed 2016 in store, with a new line-up, a new album, and shows starting this Friday night at The Gov prior to embarking on a festival tour of the UK, before winding back through Australia, and then possibly moving onward to Southeast Asia. Quite the itinerary!

Bassist and bandleader Sneaky Pete Flierl joins us for an email exchange. PlanB has been around for awhile, but you seem to be going through something of a creative renaissance at the moment. New line-up, new music; how did it all come together?

“Since reforming in 2009 with four original members and four new members, PlanB has undertaken five international tours but, ironically, has yet to play its first gig in Australia. This was brought about largely by my commitments with working overseas in my day job. The reformed band began playing 50 percent soul covers that PlanB had played back in the mid ‘80s and 50 percent of songs I had written for the band back then. Over the ensuing tours, new originals gradually replaced the covers until it got to the stage where our last tour to China consisted of 100 percent original material.

“The departure of our vocalist and lead guitarist in mid 2015, just as we were starting to record our second album, left us in a position where we had to make personnel changes which in essence would have a major effect on the overall sound of the band. We have recruited David Robinson as the new PlanB front man; he has fit very seamlessly into the role and provides a strong vocal and visual presence to the band. The lead guitar role has been more difficult to fill on a permanent basis and has, to date, been shared between a few guitarists.”

What can you tell us about the new album?

“Time Is A Diamond is expected to be released prior to our UK Tour in mid-July. The album is being recorded at Hiball Studios with the very capable Nigel Grummet at the helm. It contains 11 new tracks, all featuring David on lead vocals. The band is extremely excited with the way the tracks are turning out. The album contains a lot of collaborations and displays a far greater degree of variation in the styles of music PlanB has previously tackled.

“We have two very distinct and accomplished female vocalists, Jen Lush from Adelaide and Ana Simonovska from Macedonia, providing some vocals on two of the tracks from the album. Jen sings with David on our current single Psycho Happy while Ana sings with David on our upcoming release Cloudy With A Chance Of Rain. Most of the guitar work on the album has been provided by talented local musician, Corey Stewart, who has also provided harmony vocals to many tracks.

“Adrian Miller (keyboards) and I have collaborated in composing most of the tracks and I think this has definitely added value to the quality of the songs on the album. Adrian has been writing lyrics for a long time and has received recognition in various countries for his lyrical contributions.

“PlanB even dabbles in a bit of ‘Urdu’ on Meri Jaan which also has contributions from a number of Pakistani musicians including rapper Waleed Ahmad and distinguished tabla player Ustad Mohammad Ajmal Khan, who has also played with the late Nusrat Fateh Ali Khan.”

2015 saw the release of Psycho Happy, the first single from the upcoming record. It’s a bright and shiny pop song with a beach-themed video. What was the process of recording the song and shooting the video?

“This was one of the early songs that Adrian and I collaborated on for the new album and we both felt that, given the right treatment, it had the makings of a ‘hit’ single. It was certainly the band’s most pop offering to date and it really encapsulates our new sound. Not to say that all our music was now going to be so heavily pop-entrenched, but it carried with it a spirit which exuded happiness and fun and catchy melodies… all of which sets the scene for the new PlanB line-up and album.

“Psycho Happy was recorded in Brett Sody’s ‘SodyPop Studio’ and we specifically took that song to him for recording and subsequent release during the time that we would be recording the album as a sort of tide-over or teaser of the new band and the new sound. Adrian suggested Brett as a kindred spirit who was very capable of bringing out what we believed the song was capable of; true to his reputation, I believe he has done this.

“The video (as with all those previous) was scripted, shot, edited and fully produced by PlanB’s trombone player, Patrick Stapleton. Again, we wanted to capture the feel-good aspect of what the song conjures up. It was filmed largely at Brighton Beach and has Jen Lush cast as the enduring wife of David.”

PlanB are performing at The Gov with Local Revolution and The Harmonics. What can people expect at the show?

“We will be performing what is essentially our UK festival tour set. Due to health reasons Adrian will not be part this performance, but my brother, Vic Conrad (Mr V Music), will be helping us out on keyboards in his absence. The band also features Peter McIver (Dangerman) and drummer David Lloyd who have both added a further change to the PlanB line-up. I’m very happy to announce that our flugelhorn player Cameron McCracken Smith, who resides in Canberra, will join the regular PlanB horn section consisting of Rob Williams on trumpet and Patrick Stapleton on trombone.”

“It’s been a huge year for PlanB so far. There has been an incredible amount of work that has gone into establishing contacts in the UK to get this unknown band from Australia onto the bill for some of their major festivals. We have five festival performances during our three-week tour and will be sharing the stage with some well-known names from the past; Primal Scream, Big Country and Chris Farlowe are just a few of our ‘musical idols’ that spring to mind.

“Although international touring is always on the PlanB agenda, we will definitely be looking at some local touring and festivals once we return to Australia. There are also a number of community radio stations in Adelaide and interstate that have supported us over the last few years and I would love to get the band out to these area/communities to perform. We’re already looking at timing for return tours to Cambodia, Vietnam and China, as well as taking our music to some even more exotic – or should I say remote – places like Mongolia.”

PlanB performs at The Gov on Fri 6 May from 7.30pm with special guests Local Revolution and The Harmonics.
Book at OzTix on 1300 762 545 or at oztix.com.au. Click HERE to purchase your tickets.