Showcasing the music of the wildly popular gaming phenomenon as it approaches its 20th anniversary, Pokémon: Symphonic Evolutions will marry visuals familiar to fans with orchestrated adaptations of music from throughout Pokémon’s history.

Jeron has been working in the video game industry for a decade, during which he’s produced numerous game soundtracks and developed The Legend Of Zelda: Symphony Of The Goddesses, and now, Pokémon: Symphonic Evolutions.

Is it gratifying to see the video game community respond to the music of gaming and make it a successful entertainment industry in its own right?

“It’s been tremendously gratifying! But not just the video game community. Of course, we’re in it for them and what Chad and I do has always been very much the ‘by fans, for fans’ approach, but the even more rewarding aspect has been the opportunity to tap new audiences and almost evangelize video game music and introduce new people to this thing that we love, seeing them develop an affection for it as well. And it’s two-pronged in that, not only are we sharing our love for video game music, but also the magical sound of the orchestra. It’s this thing that’s just incomparable and unforgettable.”

What were some of your priorities in bringing Pokémon to live audiences?

“Pokémon is an incredibly special franchise that means so much to what amounts to an enormous, globally diverse audience. We’re fast approaching the 20th year of Pokémon, which is no small hallmark for a video game series, and what that equates to is a rich, fun, elaborate history we felt was primed and ready for the symphonic treatment, and we felt fans were ready for it.

“Our priority always is to interpret and produce the material as authentically, genuinely, and faithfully as possible. Everyone that’s grown up with a series such as Pokémon has accrued an incredible amount of experience and memory from their time with the games… and we view it as our duty to respect and regard those memories as sacred— so always the goal is to do them justice and tap into that nostalgia, which is a very powerful thing.”

Without getting ahead of the task at hand, do you have a list of gaming properties that you’d like to take on?

“Ha! I do. I’m a huge gamer and, as you can imagine, I listen to a lot of soundtracks, both for game and film. But I’m also kind of superstitious and prefer not to put the cart before the horse. As such I’m forced to keep those cards close to my chest. But, maybe readers would like to tell us what they would like to see?”

Can you offer any advice to other people interested in becoming involved in gaming-related entertainment?

“Stick with what you’re passionate about, and know that no man’s an island. Relationships and teamwork are incredibly important, so don’t be afraid to introduce yourself to new people, be helpful to others, work diligently, and continually refine yourself.”

Is there anything else you would like to add, Jeron?

“We’re having a great time in Australia and are looking forward to being in Adelaide! It’s going to be so much fun. Come as you are, or come as your favorite Pokémon character. There’s never a dull moment at Pokémon: Symphonic Evolutions! We’re excited to see you and celebrate the sights and sounds of Pokémon, in a way you’ve never experienced them before!”

Conductor Susie Benchasil Seiter leads the orchestra through Pokémon: Symphonic Evolutions, and previously collaborated with her husband Chad to bring The Legend Of Zelda: Symphony Of The Goddesses to audiences.

What kinds of logistical issues do you encounter as a touring conductor? Do you have a tour manager who wrangles musicians, supplies, etc.?

“There are all sorts of adventures that accompany the job of a touring conductor. You really have to walk in (very early before rehearsal) and expect the unexpected. Another good reason for me to show up very early is there are usually questions I field from the musicians and there are specific sounds from the percussion we look for in every show that is not always obvious from the notes on the page. I do however travel with our technical director Eric Wegener who sets up my podium, screen and click track among a million other show related things.”

Is there a particular aspect of this show that you enjoy the most? What’s special about it?

“I really enjoy playing with the musicians. I am a true extrovert and love people. I consider each musician a treasure box because they all have a unique story of how they came to be sitting in that chair. My favorite part of the show is learning those unique stories.

“I also love meeting the fans after the show. I see a lot of families and young concertgoers that are discovering the orchestra for the first time and loving it!”

Tell us about the audience reaction to the show.

“I feel that we are bringing an outlet for Pokémon fans and families of fans to have a communal experience. The audience reaction has been amazingly warm and enthusiastic.”

You and your husband worked together on the music for Symphony Of The Goddesses and again now on Symphonic Evolutions. How do you manage working together? Do you have rules?

“Working together as a husband and wife team has not always been easy, especially in the beginning. However we’ve now worked on dozens of projects together and have developed an amazingly efficient shorthand that makes us a dream team together. We don’t have specific rules per se. But we respect each other’s expertise, rely on each other to be honest and forthcoming, and enjoy our time together when we’re working together or just hanging out around the house. Oh and we make sure to enjoy a really nice dinner out after a project completion.” 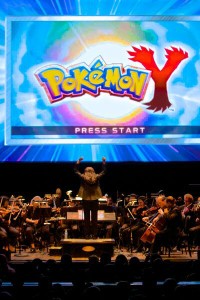 Chad Seiter has composed for film and television over the past decade, including assisting famed Bad Robot composer Michael Giacchino, and more recently composing for The Legend Of Zelda: Symphony Of The Goddesses, and now Pokémon: Symphonic Evolutions.

How do you approach adapting video game music, knowing that the fan base for Pokémon and Zelda have long established relationships with these melodies?

“I’ve had the opportunity to be a part of a lot of projects that have become cult classics, so it’s really important to me that the audience feels a sense of nostalgia and connection with the show. Pokémon fans have been hearing these iconic melodies for nearly 20 years. It’s really important to me to find a way to bring them out in a new interesting way that really resonates with them, where they can hear the theme the way they remember it in their head, but has an interesting new orchestral setting. It’s actually pretty difficult!”

Do you play the games to experience the music, or is it provided to you separately? Does someone give you the keys to the archives?

“As for the music itself, my assistant actually does complex ear takedowns to the music, and puts it in a computer format called MIDI that makes it easy for me to work with – that way, I can focus purely on the creative aspect of the music. I wish I could get keys to the archives, but often times they don’t exist when projects are 20 years old. Ear takedowns are one of the hardest parts.”

Do you think playing the games is helpful to understanding the potential audience and appeal for a Zelda or Pokémon orchestral performance?

“Absolutely! I grew up with games, and they are an important part of my life. I can always tell when an arranger or composer has written music for a medium like video games, when they haven’t spent any time playing them. It’s like binge-watching a show on Netflix in a weekend as opposed to spending the seven years watching it on TV and analysing it with your friends all that time. It lacks a certain confident character that pays an honest tribute to the material.”

As previously mentioned, you and your wife work together. How do you manage working together? Do you have rules?

“Just like Susie said… at first, it was quite hard! When you’re married, there is a certain social filter that vanishes. We were arguing a lot at first, but after a while we found a groove and it turned out even better. Eventually you establish this amazing shorthand that really helps get you through the tough times. We don’t need to sugar coat anything with each other, just tell it like it is. It’s great!”