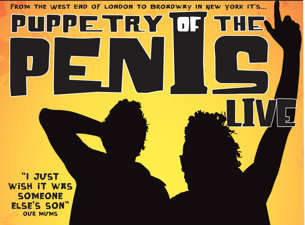 As of today most of the Western World has played host to Puppetry Of The Penis and having conquered the world with no pants on, they’re back to make eyes pop and legs cross. Don’t miss your chance to cackle at our nuts.

We sent the boys some questions. Here is what they had to say!

MICKEY: “Boltz Cafe – Rundle St 1997! Adam Hills was host, it went great! A man in a bird suit rushed the stage and attacked a heckler.”

JAYMIE: “Valentine’s Day 2006 at The Comics Lounge Melbourne. I was by far the best act of the night and thought I am ready for the big time! Then I bomb every night for 2 years straight.”

MICKEY: “Nobody was taking me seriously at KFC.”

JAYMIE: “I was a Real Estate agent and hated it, so I did my first gig the night I quit my job.”

JAYMIE: “Without sounding like a suck up I would say Mickey D. I was his stage tech during a festival run and I saw him do a different act every night and it was funnier than the night before.”

JAYMIE: “Carrot Top. The man is a multi-millionaire performing every night in Las Vegas. I am willing to go ginger for that.”

MICKEY: “What do you call a man with a stick up his bum?? … An Ambulance!”

JAYMIE: “Two fish were sitting in a tank. One fish turns to the other and says ‘Gee I hope you know how to drive this thing’!”

MICKEY: “You shot me in the Ass! – Denzel Washington – Training Day.”

JAYMIE: “Anything from Mystery Science Theatre 3000.”

JAYMIE: “Worst gig was in Newcastle, the host brings me on stage with ‘This guy is from Melbourne!’ To which the crowd boo’d for 15 minutes straight.

“Best gig was getting revenge and returning to a sold out crowd and waving my willy at them.”

MICKEY: “No imaginary friends sadly… but I had a sharpened stick called Angie.”

JAYMIE: “I played with Lego right up til I was about age 15. It wasn’t a sexy chat up to a girl explaining how you spent a Friday night building a Lego Starship Enterprise.”

JAYMIE: “Studying to be a Primary School teacher. I’ll be going from dick tricks on stage to teaching your children!”

MICKEY: “I can fart Happy Birthday with my eye socket.”

JAYMIE: “Trust me, there is nothing hidden about my talent.”

JAYMIE: “I was an extra in the movie Godzilla – Final Wars (I got to live out my dream of running terrified down a city street).”

MICKEY: “The black panther at Cuddly Creek Zoo – spraying its muck on my sister… funniest thing ever.”

JAYMIE: “I was rejected by the lady in a video store because I tried to hire the Puppetry Of The Penis doco Tackle Happy because I was too young. Now I’m in the show!”

JAYMIE: “Adro from The Biggest Loser Season 1 the night after he won.”

MICKEY: “The Palaeolithic era. Mainly for the diet.”

JAYMIE: “I would go back and heckle Shakespeare.”

MICKEY: “I write them all down and sell them to The Project.”

JAYMIE: “I tell them to drop their pants and show me a trick instead.”

JAYMIE: “My Mother. She is conflicted over my job but she is still proud.”

MICKEY: “Believe in yourself.”

JAYMIE: “There is no such thing as a Un-Funny dick show – Grand Master penis puppeteer Friendy.”

MICKEY: “Believe in Me.”

JAYMIE: “When I was a tech, I used to tell the act who was about to go on stage that a producer from Channel 9 was sitting in the audience talent scouting. Either they will rise up and smash the gig in order to impress the scout or get over come with nerves and die a horrible death.”

JAYMIE: “Eddie Izzard for all trifecta.”

MICKEY: “Yes. But the gig was at a hospital.”

JAYMIE: “POTP got its big break due to a high profile West End producer sitting next to a woman who laughed so hard that she wet herself. When the producer offered to move so she can go to the bathroom she said “No I am not going anywhere”. The producer was shocked to see that the woman would rather sit in her own piss than miss out on seeing the rest show.”

JAYMIE: “Can I practice the tricks on you?”

JAYMIE: “My mother was in the audience and my Puppeteer partner at the time, Sammy, asks her ‘Is it how you remember seeing it?’ (referring to my willy) to which my Mum replied ‘Yeah it hasn’t changed much’!”

MICKEY: “Pralines and Dick… just like last time they asked me.”

Puppetry Of The Penis performs at Royalty Theatre at 9.45pm from Fri Feb 13 until Sat Mar 7.