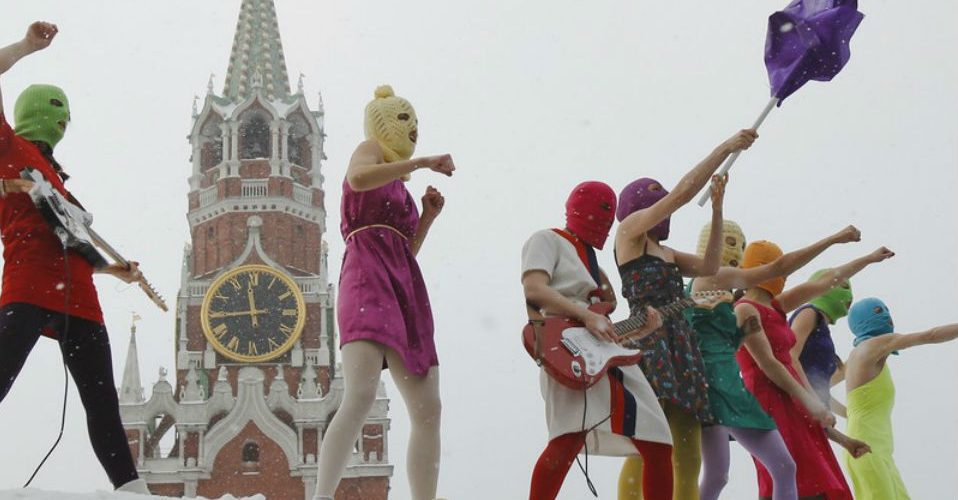 In 2011 Pussy Riot formed in Moscow and quickly earned a reputation for subversive political demonstrations and public activism. Founding members Nadezhda ‘Nadya’ Tolokonnikova and Yekaterina ‘Katya’ Samutsevich played their song Ubey Seksista (Kill The Sexist) at a lecture on feminist punk, and within the same year the collective started a spiralling momentum, gaining notoriety for staging prominent and visible protests. Often targeting the bare-chested horseback-rider himself, President Vladimir Putin, Pussy Riot drew focus to corruption and injustices within Russia.

Riot Days is an in-your-face punk experience, members interactively and explosively engaging with audience via a bombardment of visual and aural assaults; the intensity progressively rising in waves, only faltering at brief intervals for performers and audience members alike to catch a breath before launching at the jugular once again. Throughout the relentless barrage of colour, light and blasting music the six-piece intensify recounts of interactions with police, court secretaries and prosecutors with translated slogans such as ‘Crush Putin’ projected high above whilst throwing water over an increasingly hot and sweaty crowd. Trumpet and sax simultaneously collide, and frenzied, gull-like vocal screams expound upon human rights violations.