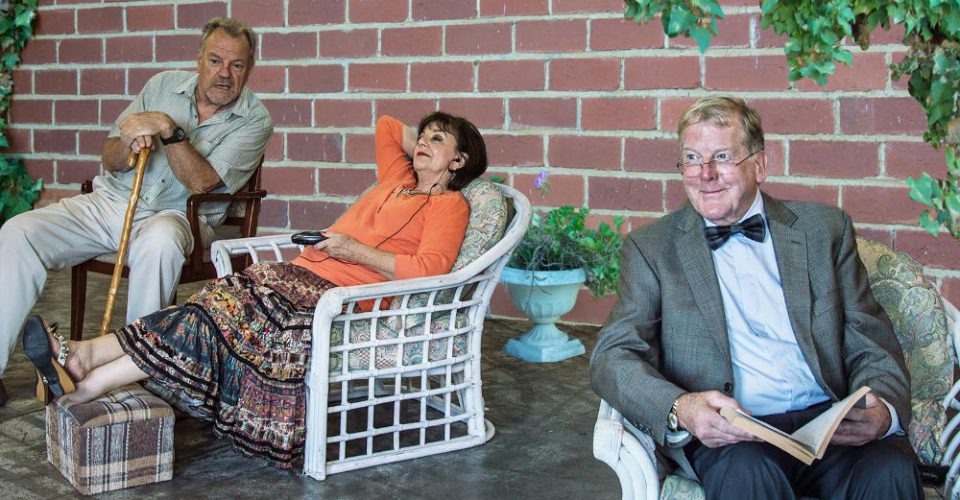 Adelaide’s longest running Arts Repertory Theatre are fast approaching the debut of their next performance, a production of Quartet which, as the name suggests, is being shown with four lead characters in a sentimental, bittersweet yet comical tale of music, friends, aging and mortality. Commencing Thu 9 Apr and continuing until Sat 18 Apr, Adelaide’s oldest theatre group is proud to showcase yet another high quality and professional show to the arts-loving community.

The Clothesline speaks with one of the four main performers within this story. Theatre veteran Russel Starke, who performs the role of Reg, is enthusiastic about the return to the stage after taking a rest for the last few years while he has focussed on the myriad of other artistic roles he plays in his real life.

“I’m thrilled to be involved with this performance,” he begins. “It’s a mix of humour, human angst, sadness, memories, regret – so many things. I haven’t performed for a few years as I have been so heavily involved in other projects but I am itching to get back on stage. 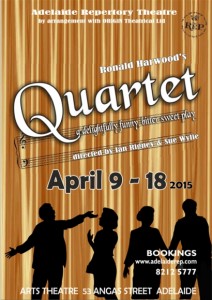 “The plot of the performance is interesting,” Russell says. “Quartet is about a group of aged opera-singing friends who are reunited to perform Rigoletto for 19th Century Italian Romantic Giuseppe Verdi’s birthday anniversary, in a celebration of the composer’s birthday, his music and, indeed, his life. They all live together at Beecham House – a home for retired musicians and performers – and the interruption of their learning and preparation for this show comes as Jean Horton, the once popular Opera diva and former wife of one of the residents, arrives and causes a social uproar among the group.”

What exactly does this show examine within the storyline?

“It is a hysterical tale; we look as an audience at aging people, and specifically these artists,” he replies. “They are all still young inside, and each of them still posses their musical and vocal talents; that doesn’t fade, nor does the spirit. We get to see how they live, and how they lived before their retirement. There is a genuine banter between the different personalities which is funny and sad all at the same time. I am thrilled to be working with some amazing performers as part of Quartet.”

Brian Knott performs the role of the ever-flirtatious baritone Wilf, Julie Quick is the shy and forgetful contralto Cissy and Jean Walker perform as soprano Jean – the ex-wife of Russell’s character, celebrated tenor Reg, who is still heartbroken by her infidelity so long ago.

“The personalities bounce off one another and add a great deal of interest to the story,” Russell says.

Originally written as a play by Academy Award-winning screenwriter Ronald Harwood, Quartet was adapted and released as a movie in 2012. It was directed by Dustin Hoffman in his directorial debut, with an all-star cast including Billy Connolly, Dame Maggie Smith, Tom Courtenay, Pauline Collins and Michael Gambon.

The Adelaide Repertory Theatre production of Quartet is co-directed by Ian Rigney and Sue Wylie who are embracing the years of experience these local performers have between them.

“I have had such a varied and busy theatrical career,” notes Starke, as we discuss his lengthy list of accolades. “I wrote as a critic for years, for radio stations and newspapers, in academic papers and in just about every capacity. I love the theatre; it is such an honour to step back into a role such as this. I am excited to also have been recently asked to present a poetry program on the ABC (radio) and generally being out and about. I am sure we will have a healthy group of attendees who will really love the storyline of this quaint tale.”

For those interested in our city’s historical background with The Adelaide Repertory Theatre, everything the group presents, they do so with the highest quality and is the oldest surviving amateur theatre company in the Southern Hemisphere. Russell Starke and his thespian colleagues offer a fabulous evening of laughter and poignant thought, and he closes our conversation by suggesting that everyone makes sure they come along to Quartet, to bring a friend or two, and support local entertainment while witnessing some of what he feels to be the best theatre Adelaide has to offer.

Quartet performs at Arts Theatre at 8pm from Thu 9 Apr until Sat 18 Apr with a 2pm matinee session on Sat 18 Apr.

Book at The Adelaide Repertory Theatre on 8212 5777 or www.adelaiderep.com. Click HERE to purchase your tickets through TryBooking.com.