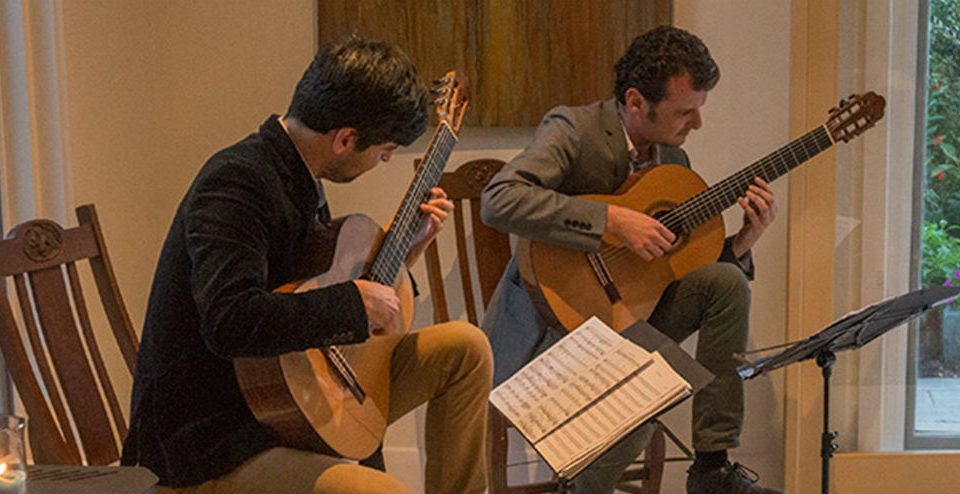 Music is an integral part of our lives, and we all know that music can affect our moods, but studies also show that music can be used to improve our health and wellness, with significant findings relating to autism, dementia, and depression. Accordingly, the Adelaide Guitar Festival has launched a new initiative called Resonance, through which outstanding festival musicians are bringing the Guitar Festival to those who cannot attend in local hospital wards and aged care facilities.

To shed light on this effort, a panel discussion was convened in the Bistro beneath the Dunstan Playhouse between Composer and Elder Conservatorium Director Graeme Koehne, Dr. Catherine Crock AM of The Royal Children’s Hospital in Melbourne and Founder of Hush Music Foundation, and Ben Northey, Chief Conductor of the Christchurch Symphony and Co-Artistic Director of the Hush Music Foundation, moderated by retired ABC Classic FM broadcaster Julia Lester.

The Hush Foundation was founded by Dr. Crock to reduce stress for children and families faced with hospital procedures. The Foundation commissions and curates compilation CDs designed and composed to calm and relax people of all ages, with proceeds going to support the 12 participating Children’s Hospitals as needed, funding everything from pain management for child cancer patients to research into care and music therapy. Past Hush compilations have featured music from the likes of Guitar Festival Artistic Director Slava Grigoryan, composer Joe Chindamo, and the Tasmanian Symphony Orchestra.

After some brief introductions, a relaxed and fascinating discussion of music therapy, the power of music, and the work of the Hush Foundation ensued. Graeme Koehne related how disappointed he was to visit his parents in an aged care facility, where their sole entertainment was the “desert” of daytime television. This inspired him to read and research the benefits of music in aged care, and how performance, dance, and sing-alongs can help to keep the elderly engaged and active.

Dr. Crock discussed the start of her musical journey, and how when she returned from maternity leave 22 years ago, she began looking into ways to reduce stress in the hospital, and how this led to the idea to compose specifically for the environment, which reduced the stress levels not only of the patients and their families, but also of the hospital staff.

Ben Northey discussed how he came be involved with Hush, and the way that visiting the hospital impacted him, impressing upon him the need to compose custom music for the environment that is transporting, engaging the intellect and the imagination, and allowing patients to perhaps mentally escape their circumstances.

Julia Lester spoke of her experience with concerts, and how she’d witnessed music deeply impact the audience, causing engaged boisterousness followed by reverent silence, and even prompting elderly people who either didn’t or were unable to talk into conversation. This prompted a discussion of how music can spark memory, with Dr. Crock discussing how music associated with periods in earlier life can activate neurons that awaken old memories and Professor Koehne mentioned an instance where music seemed to provoke a catatonic patient to dance. Julia Lester mentioned the ABC’s similarly fascinating Catalyst:Music On The Brain program that demonstrated that music triggers responses throughout the brain. Professor Koehne said that we need to find ways to explore this therapeutic potential in a “more directed fashion.”

The discussion moved on to the politics and economics of music education, and how the decline of arts education funding is at odds with the emerging consensus that music can improve health and quality of life. The lasting impression given was that music can play a crucial role in health and aged care if we continue to invest in research and music education to further develop the potential applications.

Click HERE for more information about the Hush Music Foundation and its music collection.