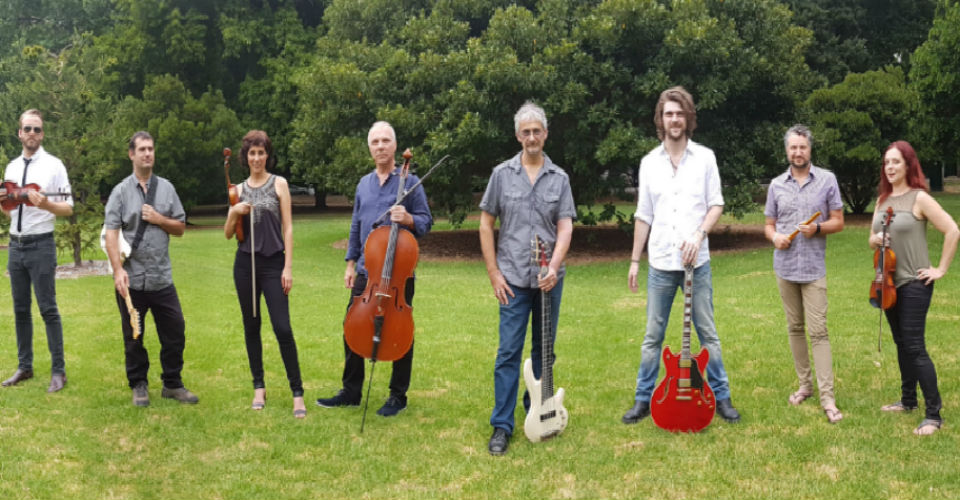 After a successful 5 star season at Adelaide Fringe 2017, Rock Orchestra Under The Stars has decided to do it all again!  Timeless classics from the likes of  Elton John, David Bowie, Paul McCartney, Gerry Rafferty, The Cranberries, Jimi Hendrix, Pink Floyd, The Eagles, Whitesnake, Fleetwood Mac, Metallica, System Of A Down and Foo Fighters all played by a 12 piece ensemble in the balmy outdoors on the Museum Lawns at Adelaide Botanic Garden.

Adrian Miller speaks with band leader, vocalist and bass player Eugene Russo and asks where the idea came from to combine a cover band with an orchestral ensemble to form a rock orchestra?

“For years we’ve performed without a backing track and when choosing songs we would carefully select those that would work live without compromising the song. However many songs had to be binned because we wouldn’t do them any justice.

In 2015, on a road trip with my wife, listening to music I grew up with, noticing and commenting on the strings and horns in many rock songs,” Eugene says. “I was expressing how great it would be to have strings with our band, even if it were just for one night. My wife, excited by this said, ‘Why don’t you do it? Just ask Josh from Akoustic Odyssey, see if he’d be interested’. I loved the idea and I phoned him right away and without hesitation he said yes. Everyone jumped on board and before we knew it we were rehearsing for our first show.” 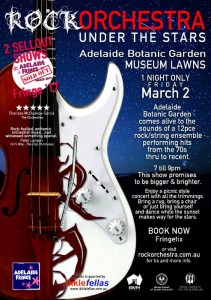 Were you surprised by the success of last year’s Fringe performances?

“Hell Yes!! Overwhelmed more like it,” he exclaims. “We’d sold out both shows and we were getting emails and calls requesting to buy tickets. We opened another 50 for the second show and they sold in a few days. We also had people paying at the door so we had over 450 people at the second show.”

Who is in the band? Is it the same line-up?

“The main line-up hasn’t changed, however this year due to other engagements and personal reasons we’ve had to recruit two new violinists. We’ve also increased the line-up to include percussion – the timpani. Piano and keyboard is now playing a bigger role this year for the new songs we’ve added to the set list.

“My role as singer and bass player, I’ve asked a friend of mine to play bass on the some of the new songs so I can focus on vocals. All up we now have 14 people in this show. How many next year? Well, everyone who can’t do this show has asked to stay in the crew and are committed for the next.”

Are there any new surprises in store?

“Apart from a few well-known songs added to the list, there will be some visual aspects that have been added to this show,” Eugene says. “However, this is self-funded and it does limit what I can do but stretching the budget is what I do – much to my wife’s stress levels. Just quietly, there are one or two things that didn’t quite make it into this show but are earmarked for the next, which will be a little bit of fun for the audience.”

The audience is likely to know most of the songs you play?

“Yes, I think there is one song, a personal favourite by David Bowie, that is not mainstream but was still enjoyed by the audience last year.”

Do you think outdoor concerts are becoming more popular?

“There is something to be said about a natural setting for music events,” Eugene says. “With most concerts now playing at indoor venues such as The Entertainment Centre, I think we miss the ambience of outdoor musical performances. WOMADelaide is a hugely successful event, as is the Cinema In The Park. When I was looking for venues for Fringe ‘17, I found the Adelaide Botanic Garden and straight away I visualised Rock Orchestra outdoors. I couldn’t imagine anything else. I knew this was the right thing to do.”

Can we expect the Rock Orchestra Under The Stars to become a regular Fringe event?

“I’ll decide after mad March. I admit, losing sleep for weeks/months prior to the show is taking its toll and maybe it’s something I’ll overcome when I ponder on registering for Fringe ‘19.”

You describe this as a picnic-style concert. Can people bring their own picnic?

What happens if the weather is unkind?

“I mentioned the lack of sleep previously… It would be a shame to hire a marquee but if the forecast spells trouble then measures would have to be made,” Eugene says. “The weather would have to be extreme to cancel the show.”

Is there anything else that you would like to add?

“Rock Orchestra is more than just a musical performance; it’s an experience that takes us all on our personal journey back in time, to a memory or a feeling related to that song or artist we love or have loved.

“For me, it’s exactly that but more because I get to be a part of the experience from within,” he says. “I think I speak for all the Rock Orchestra crew, the pure enjoyment of performing this music live is what brings us all together, apart from everyone just being a great bunch of talented people.”

Rock Orchestra Under The Stars performs at Museum Lawns at Adelaide Botanic Garden (via Friends’ Gate) from 7pm on Fri 2 Mar.