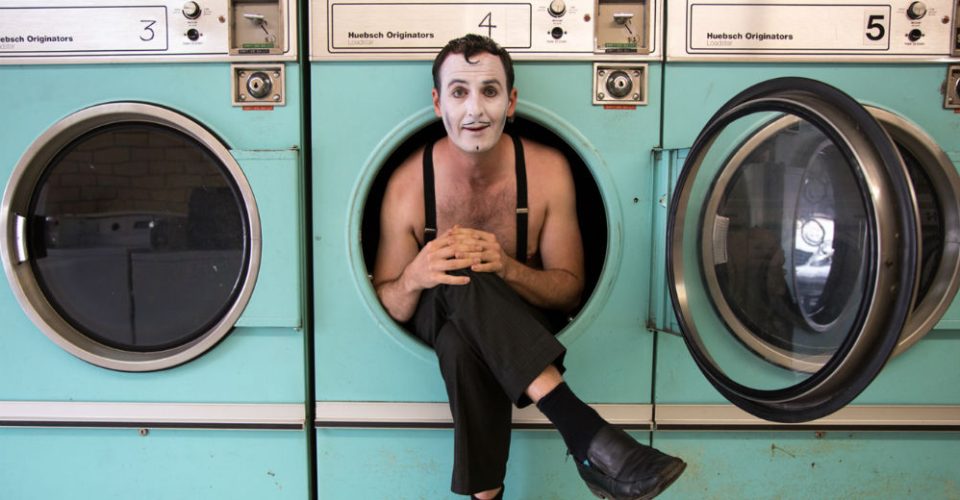 Perplexed as he may be sometimes, there’s one thing for sure, Rudi has a love for cabaret and a passion for the classics. This Chaplin-esque performer has his heart in the right place, but his grasp on the meaning of some songs may need a little work. Born from the mind of Adelaide cabaret clown Hew Parham, Rudi makes his Adelaide Cabaret Festival debut with Rudi’s The Rinse Cycle.

“I’ve performed at Adelaide Fringe and La Bohème many times over the years,” Hew Parham begins, “this will be my first developed and curated show at the Cabaret Festival, although I did do a spot in the piano bar as Rudi about ten years ago.”

So, tell us about Rudi.

“Ha! Yes!” he laughs. “I’m trying to do that thing that they do in the movies which has people wondering why someone has appeared that way; there was even a thought of a prequel about how Rudi lost his shirt or something like that.

“Rudi came from Berlin Cabaret that we did for a number of years at The Weimar Room,” Hew says. “He emerged from the first song I was given was called Let’s Call The Whole Thing Off, where he is supposed to say ‘You say either and I say either’, but he didn’t ‘get’ it and said both words the same and just got increasingly confused as the song went along. That place of bafflement has been an interesting one for Rudi. Often what would happen in the show is he would be plonked into situations where he’s got no idea what he’s doing – like if the opera singer hadn’t turned up and he would have to perform the opera in their place.

“His innocence and naivety allows me, as the performer, to put a twist or a point of attack to his not understanding bad things happening in the world; he kind of provides me a vehicle to say some out-there things, and almost get away with it. But he’s very sweet, a little bit naughty and innocently sexual with the occasional innuendo slipping out now and then.

“Rudi is also a bit of a shapeshifter; he has this ability to transform into other characters,” he adds. “At one point he becomes this old Deitrich-esque diva who is a very bitter alcoholic, yet someone who still has something to say herself. But then he could transform into a ballet dancer who urgently needs to go to the toilet…

“We’ve been exploring a lot of vaudeville and the controlled world of what vaudeville was and the structure they would use: up to three acts of musical and social or political commentary with the night finishing with a burlesque act. But that’s not the kind where girls or boys undress, but it used to mean a parody of high are – of grand opera or of ballet or something like that. So, I’ve been trying to find a way to do Wagner’s entire Ring Cycle in 15 minutes – which is kind of where The Rinse Cycle came from, in the way that Rudi would always come out and get the title of the songs wrong.”

Tell us about some of the songs Rudi will be performing.

“There’s a bit of secret stuff and a bit of still working out a few of them,” Hew says, “but there’s certainly some Kurt Weill and a very differ version of Cole Porter’s Love For Sale because Rudi doesn’t quite get the implications of what that song could mean. For any of the people that know me and Rudi, if I didn’t do Let’s Call The Whole Thing Off I would probably be in physical danger [laughs].

“There’s also a really beautiful David Bowie song called When I Live My Dream, which has this weird allusion to The Ring Cycle in the way he talks about living in his castle and having people that will serve and slay a dragon for you [his love]. It ties in nicely with Rudi’s desire to have a home of his own. Then I’ll probably end the night with an enormous amount of Wagnerian-style Opera gibberish [more laughs]!”

What else would you like to say about the show?

“I’ve been trying to turn cabaret on its head a little bit by taking it apart and picking out what it was and what it is now, and some of the clichés of it,” Hew says. “I think, just personally, that cabaret has become a weird version of itself. I used to do a show called The Giovanni Experiment about an Italian waiter character. Giovanni was very immersive within the audience; interactive and very present with them when telling a story. A lot of people called that show cabaret – which it could have been in the old definition – but then other people were saying that because it didn’t have that many songs, that it actually wasn’t cabaret at all.

“It’s almost like I feel that there is this weird definition of cabaret that is song-story-song-story-song-story cycle about a song that they knew when they were younger and it made them feel this or that. It’s not a criticism of everyone, but when it becomes too much of one thing I feel it becomes more of a cathartic experience for the performer – even in its beautiful vulnerability – but other times they are kind of dumping something on the audience without a level of connection. I think that level of presence and connection in cabaret is very important. For me, that is the definition of cabaret: people are in the room together, at tables, having drinks and watching the show; being there, in the moment, together means that we are creating something together.”