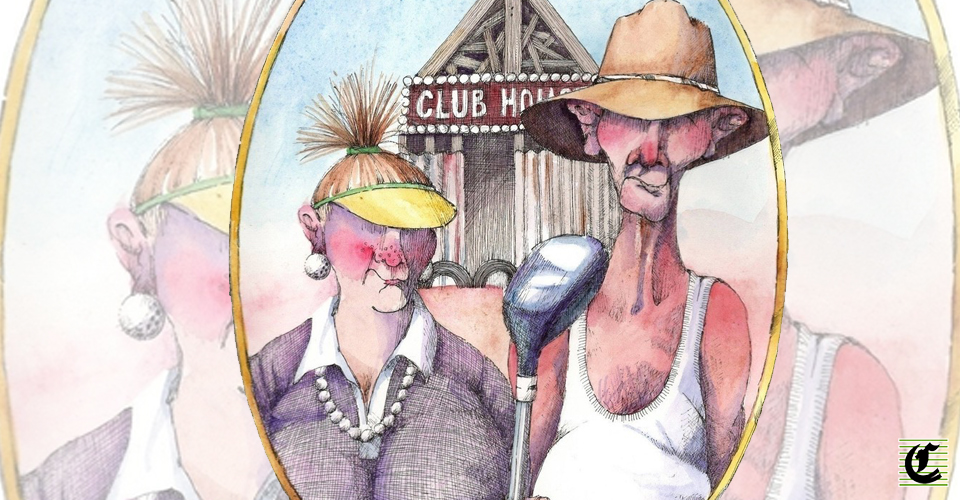 A Golf Classic in the Fringe? Has the sporting world finally taken over our beloved arts festival space? Actually no. This tournament is a rollicking cabaret comedy musical written in South Australia and about to be performed for the first time, in various venues. Bringing together a satire on sport, the Australian identity and history, corporate greed, and human stupidity and ingenuity, Saltbush Downs Open Golf Classic is a fast-moving musical cabaret slapstick comedy set in a mythical golf club located deep in remote Outback South Australia.

We speak with Keith Preston, writer and performer in this cabaret classic and suggest that golf seems to be a slightly unusual topic for a cabaret?

“It’s hard to define the genre of this show, so cabaret will have to do,” he says. “It’s got a lot of music in it but it’s not a musical as such. It is comedy farce with a band; a rock and roll farce.”

Where did the initial inspiration come from, and how long did it take you to put this performance together?

“The idea goes back a long way to when I was working as an actor in professional community theatre in the ‘80s. We did shows about the car industry, technology, youth sex and other lovely socially engaged topics. At the time it was about taking theatre to non-theatre audiences and venues so we performed in factories, schools, prisons, offices and hospitals.

“Most of my previous theatre work had been with comedy and I’d written plays with a band element that had been produced, Keith says. “I felt that people would enjoy a comedy about sport and I toyed with the idea of a play about both soccer and golf.

“I revisited and rewrote the script in late 2019; throwing out a lot, bringing it up to date and adding seven songs. By February 2020 a draft was ready so I put out the word out and found four or five people who liked the idea enough to form a project team. In early June we did an invited reading of the script at Holden St Theatres and from the feedback I completely rewrote the beginning and added two more songs, making nine in total.”

Do we need to know anything about golf (or politics) to enjoy the finer points of this show?

“Not at all, he says. “Everyone has seen golf on TV and that’s all you need to know. Yes, there are some golf themes, events, jokes etc but the show itself is not really about golf. Golf is somewhat of a metaphor and where golf is discussed it is in an absurd sense.”

As well as being a musician and writer you have also played a bit of golf yourself.

“Well, yes, I played as soon as I came to Australia as a 14 year old and at age 16 became a junior professional at Highercombe and Royal Adelaide Golf Clubs. I returned to amateur ranks and school but played pennants, State Under 21s and later Simpson Cup the top level of SA amateur.

“I was a member of four clubs and Club Champion at North Adelaide three years in a row,” Keith adds. “I always loved golf and tried to push myself to be really good but didn’t really like the golf club culture which I found conservative and old… So I continued to play for the fun of it until today. I play less now because I am sun sensitive but enjoy a game now and again.”

You are presenting this show in both indoor and outdoor venues? Do you expect the show might vary a little from performance to performance?

“The show is designed for theatre and non-theatre spaces. The show will be the same in each venue but some aspects may work better in theatres such as the AV as we act in front of projections.”

What can people expect to see and hear at your show?

“Well this show is different. It’s a blend of styles cabaret/stand up/storytelling/comedy theatre/slapstick/farce/band songs. But more than that I believe I have written a show that is truly irreverent in the Fringe sense of the word. It will challenge, amuse, intrigue and more. You come and see a show about golf but find out that there are a whole lot of other elements… It is about contemporary Australia, our identity and ambitions.”

Tell us about the musicians/cast members.

“Each of us has our roles to play as actors and musicians. Besides writing and directing, I play lead guitar and as Travis Divott co-owner of Saltbush Downs,” Keith says, “Nikki Souvertjis sings and performs as co-owner Dorinda Divott and Michael Coghlan plays guitar a tired old professional called Max Backspin. Shivani Preston sings and plays keyboards as Desert Amateur Champions Scorpion Kawalski, while Satomi Ohnishi plays drums with Darren Slynn on bass.”

All songs within Saltbush Downs were written by Keith Preston.

“They have been described as like a collection of Kinks songs by outside people. Happy with that. It is ballads, blues, pop, music hall, calypso and comedy songs.”

“I think they will be pleasantly pleased that it is about a lot more than golf,” Keith says. “It explores our national psyche in an Outback setting using a sport club as the home base. It is about where ambition will lead us and what we will do to our country in order to achieve our goals. I’m sure audiences will enjoy the blend of comedy, cabaret, theatre and music from our multi-skilled actors/musicians/singers and the storyline is very accessible.”

Do you plan to take this show on tour to various golf clubs around the country?

“My hope is to take it to all kinds of venues as well as Edinburgh Fringe/Comedy Festivals/Arts Festivals as well as regional clubs/venues. The fact that our shows in Moonta are well on the way to being sold out shows that country audiences are looking for something they can relate to!”