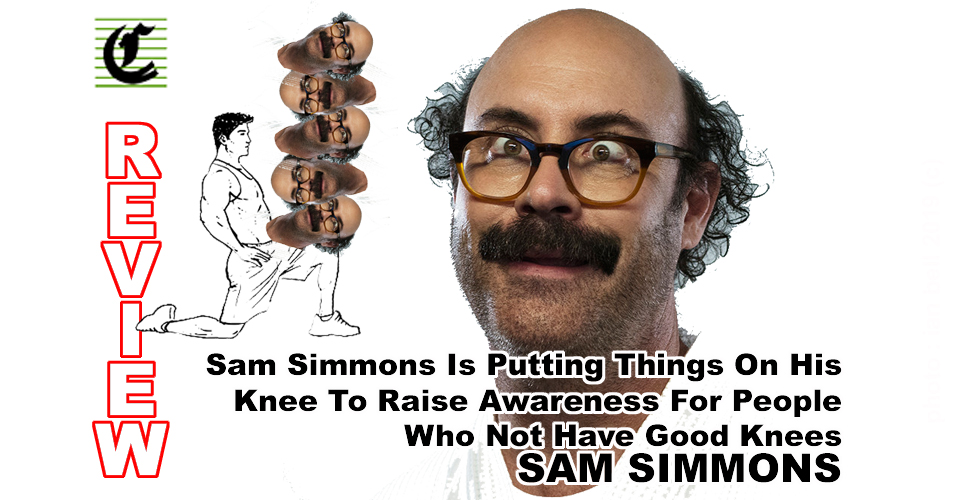 The Spiegeltent at The Garden Of Unearthly Delights, Thu 11 Mar.

This show has some things that have become Simmons’ trademarks of sorts, such as grocery items and props. This time, rather than shine the spotlight on his own foibles, Sam shares with us a collection of apocryphal, potentially libellous stories about other celebrities. It’s outrageous, hilarious and preposterous. If you need to find out what his adventures with a Bond, Harry Potter, an action movie star, TV weathermen and ‘90s pop stars, you will have to get to one of the shows.

The name of the show is an actual thing – with ever more odd ‘things’ involved. The audience cheers and roars at each new nonsense level of endeavour. Momentarily thrown by some audience members having a chat, Sam is out in the audience sorting them out and bemoaning the fact he had reviewers in tonight and that he would be ripping up any notebooks he saw. I hid my notebook just in case. No need to be concerned though, Sam Simmons is a is one of the weirdest biscuits in the Family Pack Assorted Creams that you might initially resist, but turns out to be utterly delicious.

Sam Simmons Is Putting Things On His Knee To Raise Awareness For People Who Not Have Good Knee continues at The Spiegeltent at The Garden Of Unearthly Delights from 9.30pm until Sun. 21 Mar.

Book at FringeTix on 1300 621 255 or adelaidefringe.com.au. Click HERE to purchase your tickets.