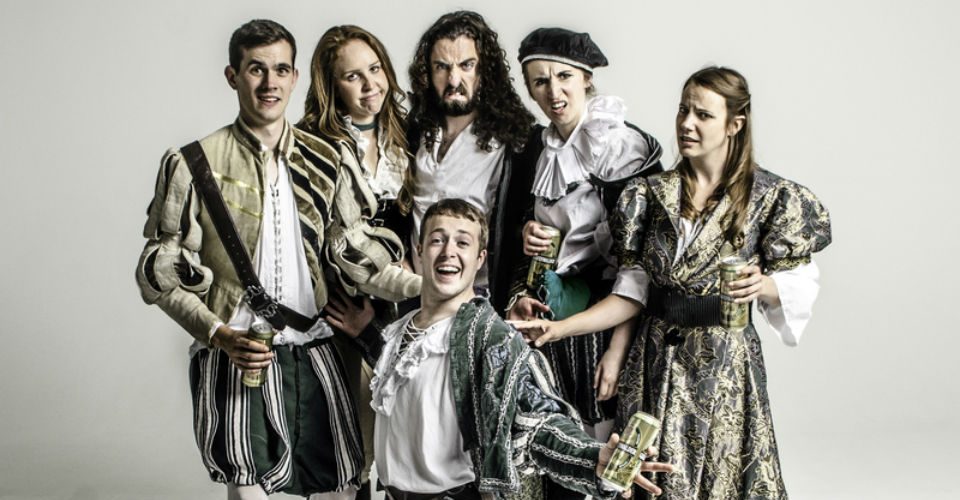 When you pay to see a show you hope the performer will at least be sober, right? Well not so with this show! The whole premise is that at least one cast member will decidedly NOT be sober!! Fortunately, it’s not the same member each night. The lines get a little blurred, perhaps even forgotten, and hopefully the laughs follow. Will it permanently affect our view of Shakespeare? The Clothesline contacted cast member David Ellis, via email, to find out more about this intriguing approach to the Bard:

“It’s incredibly high-brow. We take a Shakespeare play – in this case A Midsummer Night’s Dream – cut it down to a 45-minute version and then rehearse, just like any other professional theatre company would. The kicker is that four hours before curtain up, ONE member of our cast starts on the booze and won’t stop until we hit the stage, and chaos ensues.”

Last year you enjoyed tremendous success with Romeo & Juliet. What made A Midsummer Night’s Dream a choice for your distinctive treatment?

“Midsummer’s was the first show that we ever performed back in 2010 at the UK music festival Secret Garden Party. It was great bringing Romeo & Juliet last year but Midsummer’s is our longest running show and takes us back to where it all began.”

Is it the same cast as last year?

“Stacey Norris, Beth-Louise Priestley and myself are returning. We’re bringing with us Leanna Wigginton, James Murfitt, Christopher Lane and Mac Young. Same as last year it’s a mix of our UK and US casts with most of us being based in London and Mac coming over from Boston, MA. It’s a really great team.”

Is Shakespeare easier to understand when you’re shit-faced?

“Most of Shakespeare’s plays (especially the comedies) involve mistaken identities, twins, missing/stolen rings, letters that don’t arrive on time, people falling in love with the wrong person, the wrong person being killed not to mention all that incredibly rich language… Let’s not beat around the bush, Shakespeare is hard to understand when sober, let alone drunk. That’s part of the joy of what we do.”

Will this show help serious Shakespeare students with their homework?

“Weirdly enough we have had loads of people write essays and dissertations on us. Quite what they’ve said, I’m not sure. We definitely create an atmosphere that would be more akin to watching Shakespeare in Elizabethan England but our performances tend to get slightly away from the plot that Shakespeare intended. If you come and see one of our shows and then write in an essay that Romeo and Juliet both survive and then go on a killing spree… I can’t promise that you’ll be passing your English Literature exams.”

Is there any audience participation? Do they need to be shit-faced?

“By no means do our audiences need to be shit-faced. We always stress that you should enjoy Shakespeare responsibly. Speaking of responsibility we hand a few things over the audience for them to take care of. A bugle and gong for more drinks (one use only!) and a bucket … you can work out what that’s for.”

If you take it in turns to imbibe, this means the show is different every night? So you would recommend that people come along more than once?

“No two shows are EVER alike for us. Most of us know more that one role so not only are we swapping the drinker but also who is playing, Lysander, Puck, Helena, etc. Even we don’t know what’s going to happen. If people like it they should definitely come back.”

Are you worried that if the season is too successful you will all end up in rehab?

“We all take very good care of each other and ourselves. The drinking is 100% real but also very controlled and we’re all very good at monitoring our cast mates. We love a drink but we get our real kicks from The Bard.”

Do you plan to return next year with the Shit-Faced Enid Blyton?

“We have a sister show called Shit-faced Showtime that deals with the world of musical theatre. So far they’ve tackled shows like Oliver Twist, The Wizard Of Oz, Pirates Of Penzance and this year it’s Guys & Dolls. Imagine what we do but with complex singing and dancing thrown into the mix as well!”

Shit-Faced Shakespeare : A Midsummer Night’s Dream performs at Gluttony – The May Wirth at Gluttony from 9.30pm until Sun 17 Mar.