THE SIGNATURE OF ALL THINGS – There’s No Eat, Pray, Love Lost… – Book Review 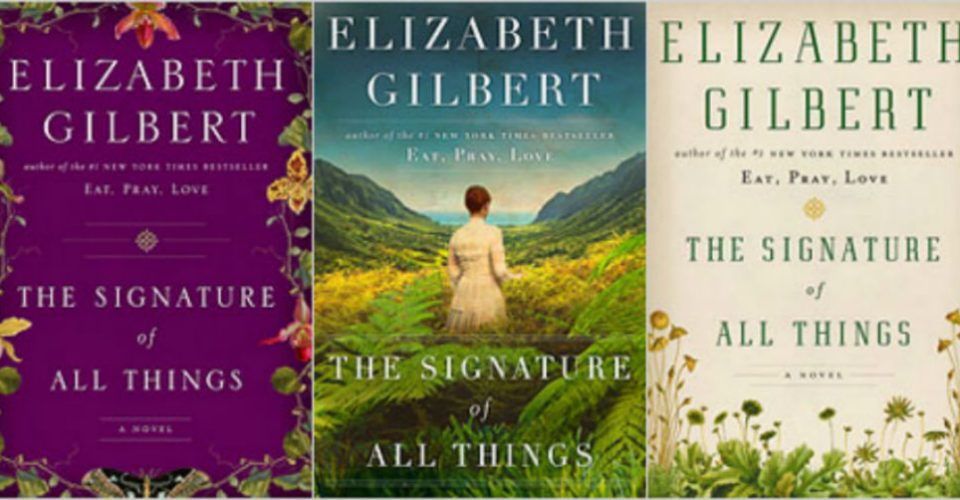 Were you one of the gazillion people who read Elizabeth Gilbert’s Eat, Pray, Love? Did you love it? Did you look at The Signature of All Things and think “I wonder if it’s like Eat, Pray, Love?” Well, I can tell you unequivocally that it is not. They are poles apart. EPL is a memoir of a woman in turmoil, trying to figure out her messed up life by eating, praying and loving her way across three continents. It spoke to many, many people.

The Signature, however, did speak to me. It is an astonishing achievement and one hell of a staggering yarn. I was compelled from the very first page – I just had to know what became of this baby, Alma Whittaker, born into such extraordinary circumstances at the very beginning of the 19th Century.

The Signature is many things. It is the story of a complex intellectual life. It is the story of an exceptional woman with intricate emotions and desires. It is also the story of the gap between science and the spirit – science can account for so much, yet it cannot explain everything. Alma Whittaker – as she worked alongside the greatest scientists of her generation with temerity, intelligence, diligence and skill – found even this most exemplary science to be lacking. It could not explain everything. It could not explain that which she’d witnessed with her own eyes. Alma Whittaker is what I call a “sticky character”. A week ago I’d never heard of her. Now I know that she will never leave me. She is so well-crafted and so deeply known by Gilbert that she became as real to me as if she was standing right beside me.

It is in the differences between Gilbert’s two most well-known books that I find evidence of Gilbert’s stunning ability. And like Alma Whittaker, I am compelled to compare and contrast in order to better understand. Gilbert had the world at her fingertips with EPL. She could have written something else just like that, but instead she chose to tackle a monumental task – uncovering the nearly unknown story of a quiet woman scientist, raised in unique and bizarre circumstances, whose personal journey (much like Gilbert’s own) informed her work to the point that the two were indelibly intertwined.

So there it is. The common ground between EPL and The Signature: both are the story of women whose professional and personal lives are fused together in an elaborate filigree.

For me, Gilbert has achieved the impossible: she has reached out to her EPL audience with a story of personal growth and sublime romantic love as well as satisfied those it didn’t reach – like me – who longed for more storytelling and less autobiographical anguish. It is a tremendous book.