The Classically Timeless Musical “Singin’ In The Rain” Brings All The Charm, Romance and Glamour of 1920s Hollywood to the Festival Theatre Stage – Interview 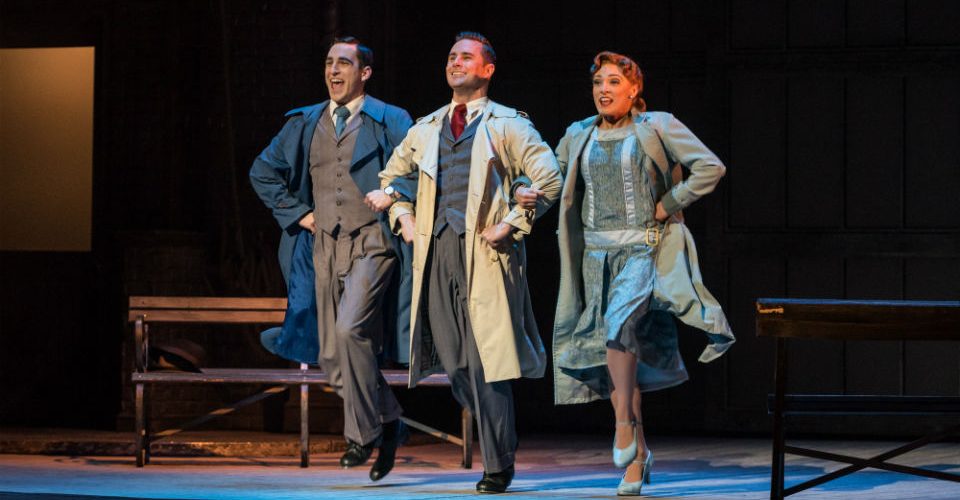 Singin’ In The Rain (the movie) is a 1950s musical comedy choreographed and directed by Gene Kelly and Stanley Donen, starring Debbie Reynolds, Donald O’Connor and Kelly himself. Based in Hollywood in the late 1920s, Singin’ In The Rain is a light-hearted look at how three performers were caught up in move from silent movie to the ‘talkies’.

Produced in Australia by Lunchbox Theatrical Productions, Michael Cassel Group, David Atkins Enterprises and Dainty Group International, this spectacular show is packed full of the charm, romance, comedy and Tinseltown glamour of one of the world’s best-loved movies. It tells the story of the first Hollywood musical, when the silver screen found its voice and left silent movies – and some of its stars – behind.

As well as fabulous songs including Good Morning, Make ‘em Laugh, Moses Supposes and the classic Singin’ In The Rain, the movie’s choreography is brought to life, and with the help of 12,000 litres of water, the audience can enjoy one of the most iconic dance routines live on stage. 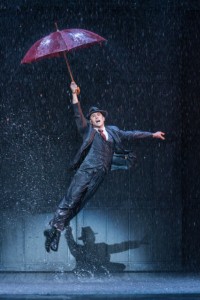 Gretel Scarlett (Grease, WICKED), who performs the role of Kathy Selden, speaks with us about Singin’ In The Rain.

“It’s based in 1927, and is an old school Hollywood romantic comedy drama,” she begins. “The story revolves around the time when silent movies were transferring into the talkies. They have a lovely leading lady and leading man (Don Lockwood and Lena Lamont) who are trying to speak in their films for the first time but, unfortunately, Lena’s voice isn’t quite what they were expecting.

“In walks Kathy Selden and they decide to use her voice to dub over Lena’s without Lena knowing. There is a whole load of drama behind the scenes, but a beautiful love story also as Don falls in love with Kathy, which really upsets the apple cart. It’s full of so much drama, comedy and laughter – and 12 thousand litres of water, of course – so you’re getting a little bit of everything.”

Silent movie stars were very animated and used dramatic head movements. When the talkies first started they had microphones between them, but because they didn’t remain very static, that caused issues with the sound recordings. Correct?

“And that’s exactly what a lot of the comedy revolves around,” Gretel says. “They have films that play through the show, so you are seeing live theatre plus black and white movies; the comedy comes as you see the struggle of them trying to move around statue-like and, of course, Lena not being capable of doing her pantomime acting at the same time, she struggles with the concept of the microphone.”

Kathy talks about the untimely departure of Adam Garcia from his leading man role due to injury sustained while onstage during the Melbourne season.

“It was actually quite traumatic,” she says. “The audience saw it happen and the show had to be stopped while I literally carried him off stage. We had to start the show again from that point with our international Don Lockwood, Grant Almirall, who is still involved to this day.

“Two days later our first understudy did his first show and we went up into one of our pas de deux lifts and he dislocated his shoulder. It never rains, but it pours!” 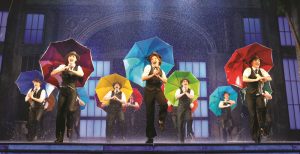 And speaking of raining, it does actually rain on stage. This must be another logistical nightmare?

“The whole show is an OH&S hazard!” Gretel laughs. “We’ve got drains in the stage, but the water is the least of our worries. It’s really quite strange, when there is a little water on the flood zone it is actually slipperier than when we have heaps more, so we’re happy when they bring down the 12,000 litres of water. We’re like ‘Yeah, bring it on, flood our feet,’ because we get more grip for some reason. It took a bit of adjusting, and we’ve had a few people face plant from slipping in the water every now and then, but it keeps us all entertained!”

Apparently, the romance between Don Lockwood and Lena Lamont is not all as it seems. Gretel explains.

Tell us more about Kathy Selden.

“She’s an aspiring actress in Hollywood but she doesn’t want to play the games,” Gretel says. “Kathy is a hard worker, which was quite unknown back then, and she doesn’t want to suck her way to the top; she really wants to work hard and be acknowledged for her talent, but this is where she comes into a bit of trouble because she wants to be true to who she is.

“Kathy enters the story as a dancer, singer and actress in an ensemble of a talkie. The producers notice her for her talent talented and want to see more. When they realise that Lena can’t actually do anything, they devise a plan to dub Lena’s voice with Kathy’s. She is sort of the turning point for them all, the story revolves all around her, but no one knows it’s her for the whole time. She is the star that’s not meant to be the star.” 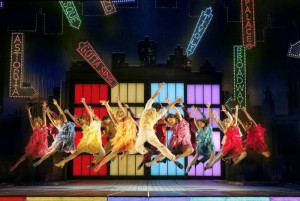 Are you enjoying playing her?

“When I first saw the audition brief, I couldn’t stop staring at it, because it’s a role that very rarely comes along; to be able to sing, dance and act and be gutsy!” Gretel enthuses. “Kathy likes to stand up to Don Lockwood; she doesn’t want to be like the other girls, which makes her fascinating to him, and the reason why he loves her – because she’s not like any other girl in Hollywood. She’s someone who doesn’t treat him like a celebrity, because she’s like, ‘You’re just like everyone else!’.

“Yeah, so I absolutely love playing her. Kathy is a ray of sunshine and brightens up the stage the minute she enters, because she’s a different energy to everyone else”

There are many great and memorable songs in the show. Do you have a favourite?

“It would have to be Good Morning,” Gretel says. “It’s iconic and is very close to the original film version. The audience love it and wait the whole first act for it, so when it finally comes they tend to erupt with thunderous support because they’re so excited for us. It’s an exhausting number, but exhilarating at the same time.”

Singin’ In The Rain performs at Festival Theatre, Adelaide Festival Centre, at various times, from Thu 1 Dec until Fri 23 Dec. 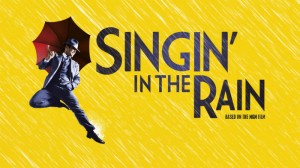