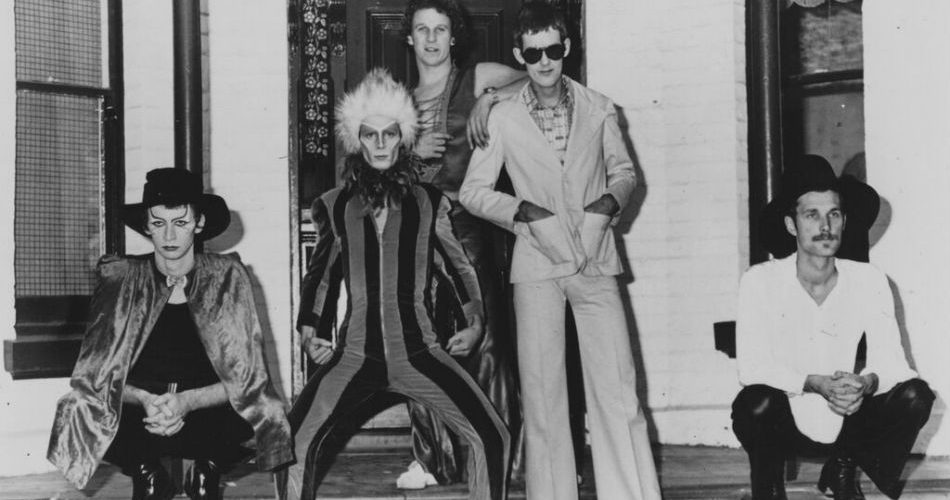 Bob ‘Bongo’ Starkie, guitarist with seminal band Skyhooks, delivered a string of classic songs such as Balwyn Calling, Smut, Ego Is Not A Dirty Word, and Living In The ‘70s. Without question these etched a pivotal groove in the soundtrack to Australia pop culture and landscape in the ‘70s. Skyhooks were five brash and irreverent, Melbourne-based musicians who, along with NZ counter-parts Split Enz, were known for wearing heavy make-up and outrageous, colourful, gender-ambiguous clothing well before KISS made it commonplace.

To celebrate the 40th anniversary and success of Skyhooks’ heyday a triple remastered CD, Don’t You Believe What You’ve Seen Or You’ve Heard, has just been released, showcasing the late and incomparable charismatic front-man, Graham ‘Shirley’ Strahan, who died in a helicopter crash in 2001.

Bob commences by offering a catch phrase for our magazine…

We laugh and agree that we are very cultured and classy before asking Bob what the impotence was for getting Skyhooks back together, and were asked to do the ARIA Hall of Fame RocKwiz gig.

“It was weird the way that came together because it’s no secret that Red hadn’t wanted to have anything to do with Skyhooks for quite a long time. Peter Bain-Hogg, the producer of RocKwiz, called up and said ‘Oh, Bob, we’re doing an ARIA show. Would you be interested in doing a couple of tunes?’ I said, ‘Oh, probably not.’ Then teasingly he said ‘Red’s doing it.’ And I’m like ‘I’m in!’ [laughs]. Yeah, so Red actually instigated it. 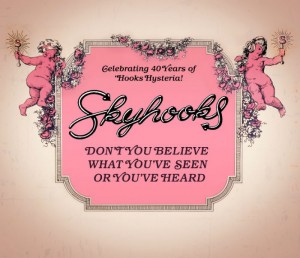 “Originally Darryl Braithwaite was going to sing (Red organised that as well) and we were going to come on and do Howzat!, which was a bit of a gag, and then do a couple of Skyhooks tunes. But a couple of days before the gig Braithwaite had voice problems and we had to cancel. Then Ross Wilson was asked to come in the day before the gig, and that was a good fit because Ross was like a sixth member of Skyhooks; he produced the first three albums and his input was quite huge. So we did it, and that’s how it happened. Red instigated it.”

Did you ever find out the reason why he was ok with it?

“When we had a rehearsal with Darryl Braithwaite, I said, ‘Well, what’s going on Red?’ And he said, ‘Look, they just got me on a good day [laughs]’. But as we got into it he wasn’t that comfortable, Red was definitely addressing demons. He was a little bit all over the place but in the end I think he enjoyed himself. So we did it and it was just one of those magic moments really.”

It definitely created a buzz. The footage clearly shows the crowd having an absolute ball. Along with backing singers Vika and Linda Bull, who was on guitar in the background?

“Ashley Naylor. James Black and Ashley from the RocKwiz house band werecovering Red’s parts just in case Red fucked up. In actual fact he did because he’s a little bit out of practice. He hadn’t played those songs for 20 years. It didn’t matter that much, as long as he was on-stage he was covered.”

That was one of the distinctive things about Skyhooks, those fantastic unison guitar parts, and then they broke into the harmonies. But they were so tight.

“That’s it. We had parts, and we played them. That’s how it worked. If you played them wrong they didn’t sound right. Each tune certainly had signature parts that were really important.”

But the energy was there and people seemed to love it.

“It was fun. But for us it was a bit like premature ejaculation – you’re on and then *pfft* three songs… is that’s all there is [laughs]?”

Bob discuss the release of Don’t You Believe What You’ve Seen Or You’ve Heard.

“It’s a look at our peak period, ’73-’74, when we were king. They’ve remastered Living In The ‘70s and the Ego album, and they’ve added some demos to both albums. There are also a few tracks that we used to play in our live set that didn’t make it onto records. It’s the best packaging I think we’ve ever done. Warners have done a really good job.

“The third disk is a whole bunch of live recordings during that period. Skyhooks were renowned for being a good live band… So, do yourself a favour [laughs]!”

How did it feel to reminisce?

“I love hearing live stuff from way back when because it was me when I was 21. It’s fun; like an out of body experience. I’ve actually been doing a Skyhooks tribute band for a couple of years with a show called Million Dollar Riff. I use a girl singer because I’ve yet to find a guy who could come close to Shirl’s amazing vocal range.” 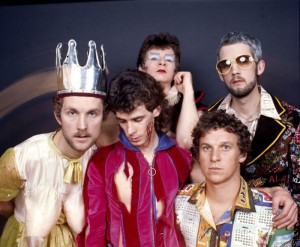 He had such a distinctive voice.

“It’s really hard to find someone who can sing and have the same sort of larrikin spirit of Shirl. He was just a natural on stage. You never knew what was going to come out of his mouth. He was the key to the audience. All we did was back him up – he was the glue.”

There was a certain theatrics to you all, though. I think the whole package was what made Skyhooks quite unique. Absolutely, Shirl was an essence, but if it didn’t have all of those components it wouldn’t be Skyhooks.

“That’s true. Over the years we changed singers and guitarists, and when we did get together 20 years later, that’s when you really understand chemistry. When you’re in a room together and you play for the first time – and the realisation of ‘Wow, that’s what it was.’

“He was a freak. Shirl had an awesome personality and was a terrific bloke. He was a natural singer, with pitch perfect; he could just do it. Half the time he didn’t know what he was singing about but it didn’t seem to matter [laughs].”

This package is a lovely tribute across that period… Fans will appreciate having the honour of listening to the demos and seeing the progress from the beginning to the final studio product.

“For real, it’s a great package. It’s got a fantastic booklet in it, really good photos. There have been a lot of crap photos taken of Skyhooks over the years – it’s sort of sickening to see half of them turn up, I get embarrassed. But these ones are really good, this is a class package.”

Dave Laing is widely respected for collating and documenting some of the distinctive ‘70s sub-cultures in and around Melbourne, and we ask Bob about Laing’s influence over the Skyhooks project.

“Dave Laing from Warners instigated the project. He worked with Greg Macainsh (Skyhooks’ bass player and songwriter), who sourced the demos and re-mastered the records. Between the two of them they’ve come up with a real good thing. Peter Green, from our fan club, also had a hand in delivering good photos and suggesting demo tracks. 1973-74 – it’s like someone lit a fuse and for two years it just went off like a firecracker.”

Your brother Peter played with Skyhooks?

“He was in a very early version, even before Red was in the band. I replaced Peter and he went off with Jo Camilleri, backing a stripper up the West coast. That was his mistake [laughs]. I ended up getting in the band and the thing took off. No one would have predicted it. They were such early days.”

Is there any likelihood of promoting the CD live?

“It’s unlikely but you never know because while we’re still alive something could happen. I wouldn’t want to do anything without Red because he is a very important part of the whole mixture. The problem is the singer.”

Daryl Braithwaite would be very interesting, purely because of the supposed fan rivalry between Skyhooks and Sherbet.

“That would be very weird [big laughs]. Trying to get someone to mimic Shirl is not where it’s really at. To go up against Shirl is a big call. I wouldn’t hold your breath – but you never know.”

The deluxe 3CD set Don’t You Believe What You’ve Seen Or You’ve Heard, 40 Years Of ‘Hooks Hysteria is out now on Festival/Warner.